AT&T today announced plans to unveil a next-generation video platform this fall, which will be introduced first to DirecTV Now customers later this summer.

As part of a beta test for the platform, DirecTV Now subscribers will gain access to a cloud DVR feature, which will allow them to record and access their shows from anywhere. A wide selection of live channels will be able to be recorded, with 4K and HD video quality. 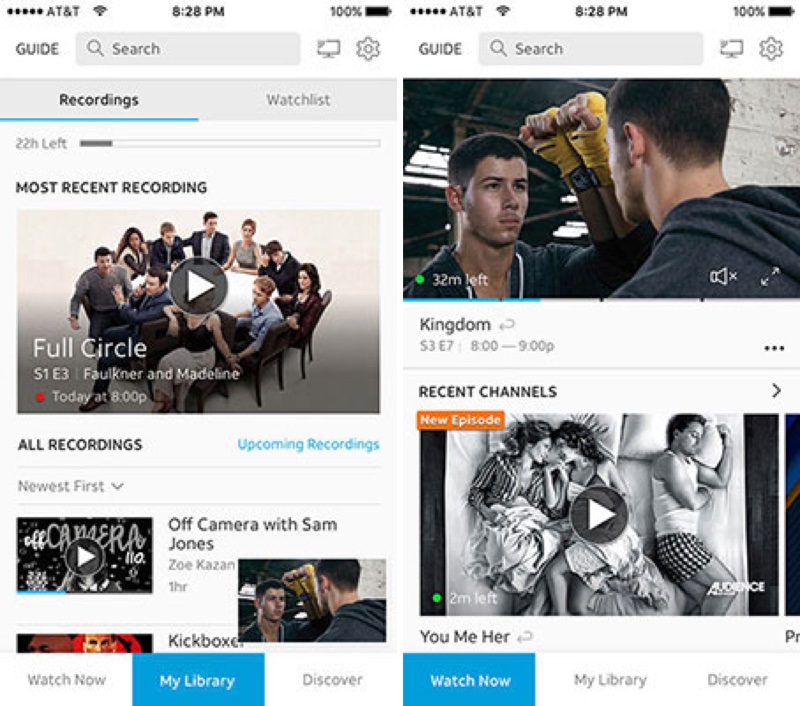 "We all want easy and quick access to our content, regardless of where, when or on what device we watch it," said David Christopher, chief marketing officer, AT&T Entertainment Group. "By developing for a single video platform, we'll deliver new features and platform innovations in a faster, more efficient way. And it will be simple and consistent wherever you watch--TV, phone or tablet."

AT&T also plans to introduce a whole new interface for the video platform, which will provide a "consistent look and feel" across all of the company's consumer video services. DirecTV testers will be able to provide AT&T with feedback on the new design.

Eventually, the next-generation video platform is expected to support features like live TV pausing and parental controls, expected later this year, and user profiles, offline watching (download and go), and 4K HDR are planned for 2018.

According to AT&T, beta testing for the video platform will begin in the summer, and select DirecTV Now customers will receive invites to test the features.

Porco
I'm not sure I understand the way this works... you pay to stream TV shows... and then instead of a normal on-demand service where you can stream whatever you want... you get to virtually 'record' some of those shows up to a limited amount of space... (or is that "22h left" how long you have to watch it?)? Why? I genuinely feel like I'm missing something here. I'm a Brit, and not familiar with DirecTV, so I'd be interested if someone can explain this to me (genuinely).

I mean... (it feels stupid even asking this) they're not *actually* recording GBs of video per user ... right?! So if it's just access to shows they stream... why not just provide access to all of them? Like I said, I don't get it. :confused:
Rating: 4 Votes

Negotiations with all the little mom and pop network affiliates is what is cumbersome and takes a lot of time. Something that every streaming network faces.

The fact that they have to negotiate with these affiliates is proof of how backwards this whole thing is to begin with. Why can't I just get access to whatever network-level program that NBC is broadcasting? I don't care about the local news and whatever re-runs packages that they've purchased to run throughout the day. Why should my geographic location even matter because I'm supposedly within range of their crappy tower that can't even get a clean signal to my house? This whole idea needs to go away.
Rating: 4 Votes

Scott6666
Every time I plan to cancel they announce a new feature set to make me pay for another few months.
Rating: 4 Votes

$35 for the grandfathered plan i'm on is a steal.
Rating: 3 Votes

ck2875
It will be interesting to see if they charge extra for this.
Rating: 3 Votes

macduke
What they really need is more live TV in more markets. I don't understand what's so cumbersome about streaming local TV over the internet to devices within the local TV geographic zone. They still make me watch commercials, but for some reason local markets don't want that additional source of revenue! It would also be nice to get a deal done with CBS so I can watch AFC NFL games.
Rating: 2 Votes

This service offers a small streaming library and the rest is live broadcast tv but delivered through an app instead of the cable company. This DVR service would allow users to record those live broadcasts that may or may not ever be available for on demand streaming. Live sports, awards shows, concerts, etc. are examples, as well as things like Big Brother which people may want to talk about the next day.

This sounds right. DVRs are considered fair under copyright law. IDK if that alone is the reason, but it would be interesting.
Rating: 2 Votes

Saipher
Now, only if Apple would release a 4K capable Apple TV... maybe a sign of things to come by the end of the year? ;)
Rating: 2 Votes

kuwxman
We've had DirecTV Now since the beginning and have been happy. $35/month for tons of channels + free HBO. Nothing to complain about there.
Rating: 1 Votes
[ Read All Comments ]