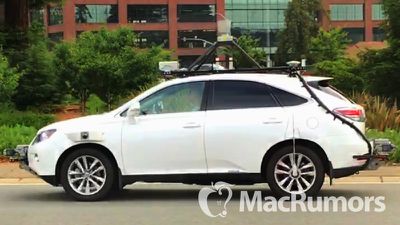 The disclosure of the relationship between Apple and Hertz came in documents recently released by the California Department of Motor Vehicles. The documents note Apple is leasing its small fleet of Lexus RX450h SUVs for autonomous driving tests from Hertz's fleet management group.

The iPhone maker is leasing Lexus RX450h sport-utility vehicles from Hertz’s Donlen fleet-management unit, according to documents released recently by the California Department of Motor Vehicles. When Apple received its license to test three autonomous vehicles from the state’s DMV in April, the documents listed Donlen as the lessor and Apple as the lessee.

Hertz's stock price is up nearly 15 percent on the news, as investors speculate about a larger partnership between the two companies as Apple's project moves forward.

Update: Apple tells CNBC that there is no partnership with Hertz and that Apple is simply leasing six vehicles from Hertz for its project.

I don't think Apple wants you to buy one of their self driving cars.

They are going to want you to use one of their self driving cars like people use Lyft/Uber.

I don't think they are creating their own car from scratch like Tesla. I think they are doing what Google is doing with Waymo and customizing existing cars via manufacturers they partner with in order to create fleets of self driving cars you can use on demand.
[doublepost=1498505079][/doublepost]

"Hertz's stock price is up nearly 15 percent on the news, as investors speculate about a larger partnership between the two companies as Apple's project moves forward. "

That's not a great speculation

Considering the news this morning from Bloomberg that Google's Waymo had partnered with Avis to do the exact same thing... it's actually great speculation.

Apple will need someone to keep their self-driving car fleet cleaned and Hertz has the network of rental car retail locations that can do exactly that just like Avis is going to be doing for Waymo.

After reading the Waymo news this morning about their partnership with Avis, it makes sense for Apple to partner with one of the other major rental car companies.

I repeat below what I said in another comment...

I don't think Apple is working on a self-driving car to sell direct to consumers like Tesla.

I think Apple is working on self-driving car technology that they can bolt on to existing car by manufactures they partner with to create a fleet of self-driving cars that you can summon on your mobile device like you do with Uber/Lyft.

Partnering with someone like Hertz makes perfect sense in this scenario. It's the same direction and partnership route Waymo is taking.
Score: 4 Votes (Like | Disagree)

DrumApple
Hertz, a company with the same great reputation and products as Apple... sarcasm. When I think of Hertz, I get an instant whiff of disgusting rental car odor
Score: 2 Votes (Like | Disagree)

shk718
If this works I bet Apple will buy Hertz. They need to own a fleet of very specific cars, those with their hardware/software in them. This is why buying something like UBER wouldn't work. UBER doesn't own cars. And they don't need to buy a car company (or build their own) because they aren't making money from selling cars. They're looking to become a modern version of the car rental agency, with steady streams of $ flowing in. I wouldn't be surprised if they do design a car (or lineup of cars) and have someone make it for them, with the "Apple" look and feel.
Score: 1 Votes (Like | Disagree)

Jakexb
"Hertz's stock price is up nearly 15 percent on the news, as investors speculate about a larger partnership between the two companies as Apple's project moves forward. "

That's not a great speculation
Score: 1 Votes (Like | Disagree)

What manuafactuer is going to partner with Apple? All these car companies are doing their own thing and have been for longer than Apple has. Google is not in the hardware business so no surprise they're not building their own vehicles. But Apple's magic is when hardware, software and services all come together. I can't see them being successful with their software and services bolted on to someone else's hardware. The other thing is Apple is all about the experience. Do they really want a customers experience to be via someone else's product? How did that work out with the ROKR or more recently the LG 5K stand alone monitor? Furthermore what auto company is going to want to give up its dashboard and in car experience to Apple? CarPlay is just projected

What manufacturer is going to want to partner with Apple? The manufacturers that want to lease and/or sell (most likely lease) A LOT of vehicles to Apple.

Apple isn't going to be partnering manufacturers to provide them with self-driving cars to put in their vehicles to sell consumers.

Apple is going to be retrofitting car manufactured by whichever manufacturers they choose to source them from, most likely via a fleet leasing program, retrofit them with the self-driving car technology they are development and then deploy them as a fleet of self-driving vehicles you can summon like you do a Uber or Lyft now.

Then a company like Hertz who will manage the fleet so that the cars return to a location to be cleaned, inspected, services, etc. Why someone like Hertz? Because they already have a network of rental car locations that do this exact same thing with rental cars.

Why would a manufacturer sell Apple cars so they can do this? Money. Why would a company like Hertz partner with Apple to manage their fleet? Money.

This is a much smarter play that would attract much quicker adoption than trying to sell consumers self-driving car that Apple would have to develop from scratch, service, maintain, etc. Look at the popularity of Uber and Lyft (also a Waymo partner). Which is why both Google's Waymo is going this route and it appears Apple is going in this direction too.
Score: 1 Votes (Like | Disagree)
Read All Comments