Ahead of the launch of the Echo Show this Wednesday, June 28, Amazon has given review units to a few sites so that they can test out the new Echo and see how its 7-inch touch screen adds to the traditional Amazon Echo experience. Amazon revealed the $230 Echo Show earlier in May and bills it as having all of the features of the traditional Echo, with the addition of a display to enhance user interactivity.

According to The Verge, one of the best aspects of Echo Show is that, "you basically never need to tap the screen for anything, unless you really want to." Instead of adding an array of touchscreen-required actions that overcomplicate the interface, the company focused on adapting the abilities of the previous Echo models to work with a touchscreen.


While there were some moments when the touchscreen's "secondary importance" caused UI annoyances, the site largely admired Amazon's decision to keep the voice control focus of the Echo line with Echo Show.


Are there things I don't love about the Echo Show? Of course. I think it's pretty homely and I think that the sound quality could be better for the price. But the improvements over the original Echo are big enough that it's my favorite smart speaker right now.

From nearly any other company, adding a screen would have resulted in feature-itis of the worst kind. By holding back, the Echo Show feels like it does more. Its strength is in its simplicity.

In its review, TechCrunch described Echo Show's video calling feature as the "killer app" for many users, allowing calls between two Echo Show devices, or between an Echo Show and the Alexa smartphone app. After entering a phone number, the Echo Show displays a list of other Echo owners from your own personal contact list, and from there you can directly call their Echo. 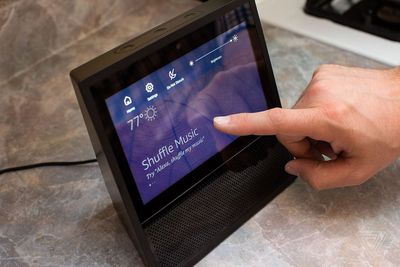 Image via The Verge
The site noted that the screen is far too small for long movie sessions (currently only supporting video from Amazon Prime), and described its resolution as "middling," but in video calls the Echo Show's 7-inch touchscreen makes the most sense. Still, both TechCrunch and The Verge did find Echo Show's "Drop In" feature slightly intrusive, as it lets selected friends and family pop into your Echo Show and see your home whenever they feel like it, but it's not activated by default.


It’s a lot easier to use than Skype (though, to be fair, most things in this life are), but it’s currently limited to Show users, which means Amazon is going to sell a lot of these to family members looking for a simple way to keep in touch. There’s also an odd Drop-In option, which takes the whole picking-up-the-phone bit out of the equation, so select friends and family can communicate directly with little warning. I suppose there’s some value for users looking to periodically check in on loved ones, but the whole thing is too intrusive for my tastes.

Wired also referenced worry about Echo Show's always-watching camera, but ultimately sees potential in the device's future, particularly once Amazon begins adding in more "skills" for the Echo Show. The site continued an opinion shared in multiple reviews posted today, which is that the Echo Show's speaker is better than that of the original Echo's, but "it's no Sonos."

Still, I find the Show’s potential fascinating. The Alexa ecosystem has grown big enough that I suspect Netflix and Hulu will soon make video skills, most smart-home manufacturers will support the new device, and games and apps will pop up all over the place. Alexa’s voice recognition works well enough to make all of this work, and developers can access the camera, the screen, the microphone, and the speaker. The Echo Show is basically an always-on, plugged-in smartphone, which could become hugely powerful.

Amazon's Echo Show is the latest in the company's line of smart speaker systems, following the Echo, Echo Dot, and Echo Look. Apple is gearing up to finally enter the same market, with an announcement at WWDC this year for the "HomePod." Apple said that its speaker is more focused on high-quality music playback than its smart speaker rivals, while also offering Siri-based AI features.

...that needs to be plugged in to work. Super convenient!
Score: 12 Votes (Like | Disagree)

canadianreader
I think spying agencies are very happy with a device like this... Always ON
Score: 11 Votes (Like | Disagree)

Jakexb
The Drop-In feature is because they understand that the Echo and probably the Echo Show are big hits for children of elderly parents. Older people who aren't keen on technology love the Echo and I'm sure the idea of video calling that doesn't involve a whole "operating system" and apps and updates and accounts and is sandboxed in to prevent any settings from getting weird... that's amazing for that audience.

And that's exactly the person you'd want to have the option of checking-in on.

Props to Amazon for understanding that and not trying to fixated on making the "cool young people device" to the exclusion of all other use cases.
Score: 10 Votes (Like | Disagree)

Video calling on your speaker because your phone, tablet and computer are too mainstream.

My 92 year old Mother cannot work a phone, tablet or computer. She used to be able to use a dedicated Skype video phone, but even that became too difficult for her.

I ordered these right away. I sure hope they did it right.

If she can ask to see her kids, grandkids or great grandkids simply by voice, it'll be a winner for us.
Score: 9 Votes (Like | Disagree)

LordQ
Video calling on your speaker because your phone, tablet and computer are too mainstream.
Score: 9 Votes (Like | Disagree)

Video calling on your speaker because your phone, tablet and computer are too mainstream.

Phone, tablets and laptops are MOBILE devices that leave homes with their owners. Something like this is like a television. It stays home and serves those who aren't with you and your phone, tablet or laptop.

Else, make the very same argument against anything & everything else covered by a phone, tablet and/or laptop too... including questioning why one needs more than any one of those 3 when they have at least one of them.

Point: think beyond yourself. Not everyone is single living alone. Those left behind when mobile devices are on the go might want to do these kinds of things during those times. A cheap thing like these kinds of things can fill such a want well.
Score: 8 Votes (Like | Disagree)
Read All Comments

Friday September 30, 2022 12:51 pm PDT by Juli Clover
Apple CEO Tim Cook has been touring Europe this week, sitting down for interviews with various media publications. Augmented reality has been a running theme in Cook's discussions, and it is a topic he brought up again in an interview with Dutch publication Bright, which is part of RTL News. "I think AR is a profound technology that will affect everything," Cook said, echoing comments from...
Read Full Article • 262 comments