Pioneer today introduced Rayz Rally, which it claims is the world's first Lightning-powered plug-and-play speaker that has no battery. 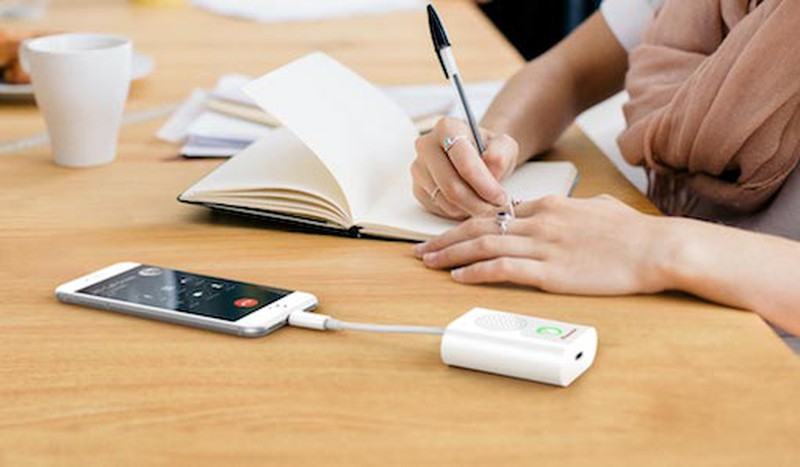 The portable speaker can be used to listen to music, but Pioneer is heavily marketing it as a speakerphone for conference calling.

For conference calling, Pioneer says users simply plug the Rally into the Lightning connector, initiate calls from the iPhone, and the call is automatically transferred to the speaker. Despite being small enough to fit in a pocket, the speaker is supposedly loud enough to be used in a boardroom.

The speaker has a single button on the front that can mute/unmute calls or play/pause music depending on what it's being used for. It also has a female Lightning connector that allows the speaker to be used with a Mac or PC, or for pass-through charging to an iPhone, iPad, or iPod touch, with a Lightning to USB cable.


Pioneer said the Rayz Rally is available today for $99.95 on Apple.com and at Apple Stores worldwide in the colors Ice, Onyx, and Space Gray. It's also available on Amazon in the United States. Prices vary by country.
Tags: Pioneer, Lightning, Pioneer Rayz
29 comments

Well they sure pioneered this product category. Oh oh OH!

In my opinion this is a cool product...I have a bunch of bluetooth speakers which I love. But being able to have this on my business travel bag is great and I don't have to worry about keeping it charged. There are many instances where a portable little speaker would be great for on demand conference calls. I don't disagree that maybe 99 is a bit much
Score: 2 Votes (Like | Disagree)

ouimetnick
Pioneer is just another brand that lives on in name only. They were big in the 1970s, flagship receiver was the massive SX-1980, I had a SX-450, great sounding little thing. Beautiful aluminum face place, heavy tubing knob, solid construction, real glass used, etc
Score: 2 Votes (Like | Disagree)

People comparing this to a bluetooth speaker seem to be missing the point. It is a speakerphone you don't have to worry about keeping charged first and foremost and a speaker secondary (probably because people would complain if it didn't play music).

I work remotely and often have to struggle on the other end of a call with my boss who never thinks to be sure the audio setup is good for me as the lone remote person. If this gets good reviews, she will get one as a gift from me to save me from metaphorically squinting my ears every time work calls and throws me on a crappy speakerphone.

Anyone who says "yeah, but a lot of bluetooth speakers already have a speakerphone function LoL0lL111" probably haven't been on the other end of a call using a bluetooth speaker. Most of them have absolutely horrid quality.

HA!!! yep you don't have a need for something then you would think its stupid...Once upon a time people couldn't understand the need to have a phone that can go anywhere LOL. I bought one yesterday. I will update when I've had a chance to give it a good try. Music sounded pretty good
Score: 1 Votes (Like | Disagree)

Dilster3k
I really don't want to be ill-hearted here; but I really don't understand why this product exists... Especially at that price point.
Score: 1 Votes (Like | Disagree)
Read All Comments