Though the launch of the "iPhone 8" is months away, case makers have already started creating cases for the device based on leaked design renderings and schematics.

A case designed for the iPhone 8 surfaced on Alibaba, and was purchased by Japanese site Mac Otakara for a series of images and a video. We've already seen some iPhone 8 cases so the design shouldn't come as a surprise, but this particular case includes comparisons to both the iPhone 7 and the iPhone 7 Plus, giving us a clear picture of how the iPhone 8 might fit into the iPhone lineup if the case design is an accurate representation of the finalized device. 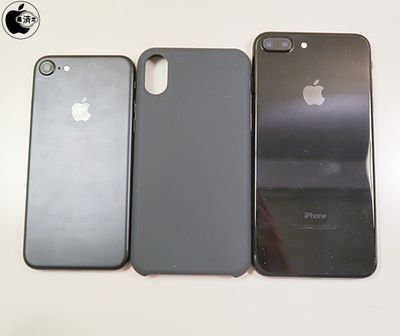 The case features a vertical camera cutout to accommodate a rumored vertical dual-lens camera, which may be larger in size than the camera in the iPhone 7 Plus, based on a comparison.

Volume buttons, the power button, and other ports seem to be in generally the same location as the current iPhone 7, with some small variations. The volume buttons and the mute switch are the same size as the buttons on the iPhone 7, but the spacing is slightly different.

Because Apple has tested multiple iPhone 8 prototypes, it's difficult to determine whether this case accurately depicts the final design of the device. Most of the rumors and design leaks have centered on a device that's similar to the iPhone 8 case Mac Otakara purchased, with no visible Touch ID button, but we've also seen leaks featuring an aluminum device with a rear Touch ID button.

Once we start seeing legitimate part leaks, we should have a much better idea of what to expect when Apple introduces the iPhone 8 this fall.

Ankaa
For christ's sake, why do they always think everyone wants an as big a phone as possible? This seriously needs to stop. At least give people a choice. (and for those coming in shouting that there are with the iPhone SE and the iPhone 7 nonplus: no, those aren't a choice if they are not equal in specs - which they aren't.)
Score: 22 Votes (Like | Disagree)

TallGuyGT
As long as Touch ID is on the front, I'm in.
Score: 20 Votes (Like | Disagree)

stephannikolic
I'm really liking the "in-between" size of the device with a screen closer to the Plus ... Perfect combo!
Score: 18 Votes (Like | Disagree)

Apple Knowledge Navigator
I think it's clear now that Apple want to drop the smaller-larger paradigm and go back to having just one product. Fine by me!
Score: 13 Votes (Like | Disagree)

BrockC
No touch ID cutout in the back? Thank goodness
Score: 10 Votes (Like | Disagree)
Read All Comments