At an event in New York City today, hearable company Bragi announced a trio of updates coming to its line of wireless Bluetooth headphones, including The Dash Pro, The Dash Pro tailored by Starkey, and Bragi OS 3. The updates follow the launch of The Headphone device that Bragi debuted earlier this year at a lower cost to The Dash, allowing The Headphone to enter the market as a more direct competitor to Apple's AirPods.

The Dash Pro's major updates center around what Bragi described as "professional grade" Bluetooth connectivity that provides audio to users "without interruption," improving on some connection issues that owners of the original Dash faced. Other improvements include a five hour battery life on a single charge (up from three), with a carrying case that can recharge The Dash Pro up to five times, totaling 30 hours of battery life on the go. 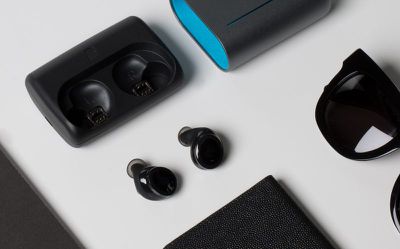 All of the advancements represent what Bragi is calling a "powerful ear computer," and not just a normal headphone or hearable device.

The Dash PRO contains more than 150 micro-components, a 32-bit processor, artificial intelligence powered by Dash AI and 27 sensors, all in a package about the size of your fingertip. Those sensors help ignite Bragi’s unique Kinetic User Interface, which enables users to literally turn their body into the device with a tap of the cheek or a nod of the head through the Virtual 4-D menu.

One-touch setup with any Apple, Android, or Windows device takes seconds, according to the company, and the audio transparency feature of The Dash has made it to the new device as well. With it, users can allow external sound to pass through into The Dash Pro, or cancel out any noise they don't want to hear to focus on in-ear audio. Audio quality has been bumped up with a new advanced audio codec with reduced white noise, and all-new foam tips (FitSleeves will be in the box again, too) provide stronger bass thanks to a better in-ear seal.

The Dash Pro tailored by Starkey

Bragi has also partnered with hearing technology company Starkey and will be launching The Dash Pro tailored by Starkey, with personally-tailored fitting and more nuanced audio-boosting features at 5,000 audiologists throughout the United States and Canada. The Dash Pro tailored by Starkey is set to benefit users by allowing them to use "Fourth Platform" contextual computing interfaces that enhance their ability to interpret audio while enabling UI interactions through The Dash's motion sensing.

“We are thrilled to announce the launch of the Dash PRO tailored by Starkey Hearing Technologies. As the world’s first custom-made wireless ear computer, this product is going to empower consumers to lead with confidence in everything they do,” said Brandon Sawalich, Senior Vice President, Starkey Hearing Technologies. “Our partnership brings a whole new dimension of personalization and customization to hearable technology to the market.”

Users will be able to purchase the tailor-made device and get a fit that is exactly customized to their ear canal, providing the "best isolation and a perfect fit with an emphasis on clarity, detail, and no loss of bass frequencies." Bragi said that professionals in precision-based fields will see benefits from such a highly personalized in-ear fit, including musicians, content creators, athletes, and more. The Dash Pro tailored by Starkey will also include HearClear replaceable WaxGuards to allow for long-term wear and minimal cleaning.

In terms of design, The Dash Pro largely has kept the same look from the original device, with only subtle changes to the control slider (gun metal now instead of aluminum), and a leather inlay colored blue or gold for The Dash Pro and The Dash Pro tailored by Starkey, respectively. The Dash Pro comes exclusively in black, so the hearable no longer comes in white.

The Dash Pro and The Dash Pro tailored by Starkey will both come with Bragi's all-new OS 3 (BOS3) pre-installed, and existing Bragi users will be able to update their devices like past OS launches. The update adds automatic workout tracking into The Dash, which can now understand when the user is running, cycling, or swimming, so keeping track of workouts and fitness progress is less of a hassle. In regards to swimming workouts, each new device is waterproof in up to three feet of fresh water as well.

One of the biggest new features is compatibility with iTranslate, the popular translation and dictionary app, which will come directly integrated into BOS3. Bragi said that this will introduce "real-time face-to-face conversational language translation" to an audio device for the first time. It works when a user launches the iTranslate iOS app, holds it up to a foreign speaker whose words are translated, piped into The Dash, and then read in the listener's language in real time.


This way, if both users are wearing The Dash the two can essentially hold a conversation without knowing the other's language. iTranslate supports 40 languages and anyone who purchases Bragi's newest wearables will get a free one-month trial. After that, the service costs $4.99/month, $9.99/two months, or $39.99/year.

Other additions in BOS3 include:

Otherwise, Bragi's new devices function similarly to the original Dash, allowing users to stream audio from an iPhone through a wireless Bluetooth connection, make and receive phone calls, and use voice commands to control the headphone's various functions. The Dash Pro can store up to 1,000 songs and podcasts on 4GB of internal memory, enabling users to leave their iPhone behind when working out.

The Dash Pro will retail for $329, and is available to purchase today on Bragi's online shop, with retailer rollout expected to begin in the coming weeks. The Dash Pro tailored by Starkey will cost $499 in the U.S. ($699 in Canada) and the company mentioned that a list of audiologists selling the device will be shared online soon. For owners of the original version of The Dash, BOS3 is available to download through the Bragi Updater.

Too expensive. The Airpods are half the price.

That was a very weird thing to read.
Score: 28 Votes (Like | Disagree)

You really don't understand what that means? Maybe it's too technical for you?

Please enlighten me. What does "more nuanced audio-boosting features at 5,000 audiologists throughout the United States and Canada" mean?

The rest, I get what they are "trying" to say, but the buzzwords they shoehorn in are annoying at best and misleading at worst.
Score: 14 Votes (Like | Disagree)

Zirel
The chip (W1) has sailed.

andy.ringwood
It doesn't matter what competitors bring out. The W1 chip is way out in front.
Score: 10 Votes (Like | Disagree)

busyscott
"Fourth Platform contextual computing interfaces." the hubris in that sentence alone, I swear, it reads just like a line from HBO's Silicon Valley.
Score: 7 Votes (Like | Disagree)
Read All Comments