Tuesday May 16, 2017 11:01 am PDT by Juli Clover
Apple today seeded the first beta of an upcoming iOS 10.3.3 update to developers, one day after releasing iOS 10.3.2, a minor bug fix update that introduced minor bug fixes and a long list of security updates.

Registered developers can download the first iOS 10.3.3 beta from Apple’s Developer Center or over-the-air once the proper configuration profile is installed. 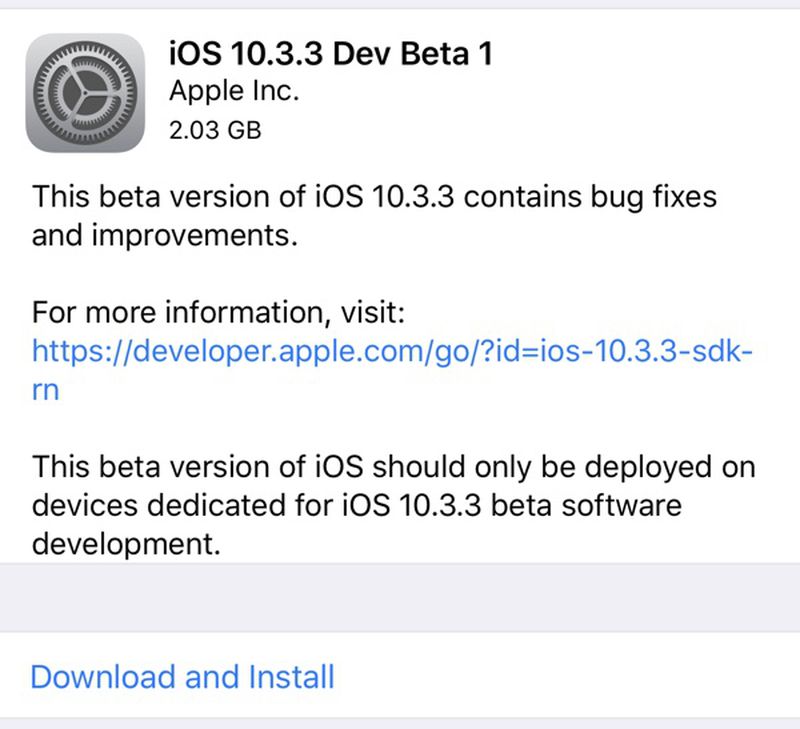 We don’t yet know what’s included in iOS 10.3.3, but with a 10.x.x version number, it’s likely to be another minor update that focuses on bug fixes and security improvements rather than outward-facing changes. If anything notable is found in the beta, we’ll update this post.

iOS 10.3.3 may be one of the last updates we see to iOS 10, as Apple is starting to shift focus to iOS 11. iOS 11 will be introduced at the upcoming Worldwide Developers Conference, which kicks off on June 5. The update will be in testing for several months before seeing a fall public release.


Security updates and bug fixes are no good now? I'd MUCH rather have this route then the old "here's iOS X, then 3 months later X.1 and that's it". I love that they are putting out routine updates and betas for those updates.
Rating: 8 Votes

Leaving the iPhone 5 as polished as it can be before its dead.

In all fairness, the iPhone 5 turns 5 this year. Very excellent lifespan in terms of updates for a mobile device. There are phones running "other" operating systems that get 18-24 months MAX.
Rating: 4 Votes


I always read DFU as "don't eff up". Maybe it's appropriate to the way you use it!
Rating: 3 Votes

applelover1016
will be sitting this one out as well most likely just for the unannounced jailbreak that has been rumored. iOS 11 in 19 days YAY!!!!!!!!!:)
Rating: 2 Votes

MikeSmoke
Probably just doing their best to leave EOL devices with a solid OS. A good thing if you ask me.
Rating: 2 Votes

vbctv
I'm also skipping this and waiting till iOS 11 on June 5th at WWDC. Worries me updating from a Beta to a Beta. And it would be beta to beta on every device if I updated.
Rating: 1 Votes

Exactly. This is unprecedented. The couple weeks before WWDC is usually very quiet. It must be for the jailbreak that's suppose tone released plus maybe safari history clearing bug.

seriously ... you need to think beyond just consumers:
Bug fixes which may affect
Consumers
Developers newly released or older iOS apps and older compatibility of such apps
Exchange Server 2013/2017/2016
SQL Server implementations with iOS apps connecting to such
SQL Lite internal iOS DB engine affecting quite a number of apps
Just because Beta 1 of IOS11 is a few short weeks away does NOT mean everything will work for possible users, corporations, governments and end users. You'd figure most of you would've figured this out by now.
Rating: 1 Votes

Then explain 8 of the last 9 years of iOS. I forgot about 9.3.3 last year, but every year prior has seen zero activity the last couple weeks before WWDC.

The trend is changing. I think we can start to work out that Apple's attitude to iOS versions seems to be changing from the historical pattern. The past couple of versions have bucked the trend with not only amount of betas but the release schedule of them. We can explain the last 8 of 9 as being the old way, we now seem to have moved over to a new pattern. It's no big deal, install or don't.
Rating: 1 Votes

Okay, so similar to that then, this will be released the day of WWDC, like 9.3.3 was last year. My bad, I must have completely missed 9.3.3 in excitement of 10.