A new photo depicting what could be the rear shell for the next-generation iPhone SE or "iPhone 7s" has surfaced on Chinese social network Sina Weibo. The photo was later submitted to leak aggregator Slashleaks. 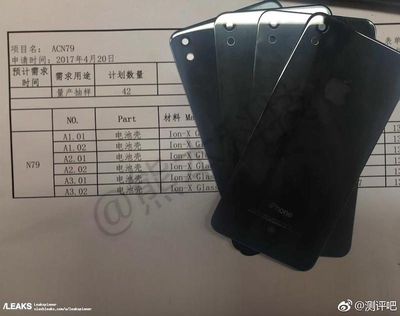 There's no way of telling whether this photo is real or not, but it appears to show a bump-less cutout for a single-lens camera with another cutout for what might be a vertically-aligned LED flash.

The document in the photo suggests the iPhone, codenamed N79, could have a strengthened Ion-X glass display like the Apple Watch. If real, the paperwork likely belongs to one of Apple's contract manufacturing partners in Taiwan, such as Foxconn, Pegatron, or Wistron.

There's not much else that can be gleaned from the photo, asides from what appears to be more of an iPhone 7-like design, which would be a shift away from an iPhone 5s design if this is indeed for the iPhone SE as Slashleaks suggests.

This would be the first next-generation iPhone SE design rumor we've seen so far this year, so treat it with a healthy dose of skepticism. Last year, KGI Securities analyst Ming-Chi Kuo said Apple is unlikely to release a new iPhone SE in the first half of 2017, suggesting a refresh won't occur before the end of June.

If that timeline is accurate, Apple could be planning to announce the next iPhone SE alongside the tentatively named iPhone 7s, iPhone 7s Plus, and iPhone 8 in September. Or, it could wait until spring 2018, given the original iPhone SE launched in March 2016. At this point, it's too early to say.

Apple doubled the iPhone SE's storage capacities to 32GB and 128GB a few months ago.

nwcs
iPhone SE 2 = instabuy! I love my SE far more than the 6 I had for 2 years. Will buy an update without question if it's the same physical dimensions.
Score: 18 Votes (Like | Disagree)

zahuh
If that's it, it's the most beautiful back of an iPhone ever.
Score: 11 Votes (Like | Disagree)

LordQ
Reminds me of an iPhone 4 which is always a good thing :)
Score: 10 Votes (Like | Disagree)

Andres Cantu
That looks more of a 7s than an SE.
Score: 9 Votes (Like | Disagree)

LDN
YES, YES, YES. Please let this be real, scale of the Apple logo to the body seems to suggest it's SE sized. Please Apple don't abandon the SE form factor. I hope this is real.
Score: 9 Votes (Like | Disagree)

downpour
This looks convincing, but I'm not sure about the placement of the Apple logo. Even taking perspective into account it looks a bit off. Perhaps it is just the distortion of the cutout in the glass. If it's real it's the right size for a SE.