Apple Again in Talks for Peer-to-Peer Mobile Payments, May Launch Its Own Visa Debit Cards

Apple is once again rumored to launch its own Venmo-like service, allowing iPhone users to pay friends and family members also on Apple's ecosystem. Sources speaking with Recode mentioned that Apple intends to announce the service -- which could have a name like "Apple Cash" -- later this year, potentially at its fall iPhone event.

Sources conflict on whether or not an announcement and release date have yet to be set, however, with another person familiar with Apple's plans suggesting that the company's Venmo-like service is still very early in development. Today's news of a potential ramp up of an in-house, peer-to-peer payments service from Apple comes over a year after the company was first rumored to be discussing such a service with a collection of U.S. banks. 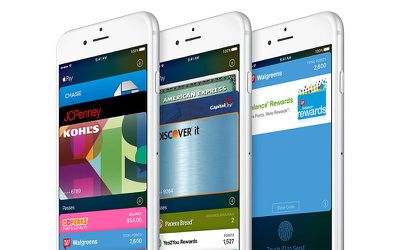 Apple’s on-again, off-again flirtation with building its own money-transfer service appears to be back on.

The company has recently held discussions with payments industry partners about introducing its own Venmo competitor, according to multiple sources familiar with the talks. The service would allow iPhone owners to send money digitally to other iPhone owners, these people said.

The unnamed Apple payments service would include a major partnership with Visa, according to the sources, allowing users to obtain digital pre-paid cards that would run on Visa's debit network but be tied directly into Apple's peer-to-peer service, and could also be added into Apple Pay. In this way, users could get paid through so-called "Apple Cash" from a friend, and use the Visa card and Apple Pay to spend the money at a retail location or online, "without having to wait for it to clear to their bank account."

The peer-to-peer platform is being looked at as a way to boost Apple Pay adoption and usage, which Apple itself has admitted to be slow over its first two years, but which the company believes to be on the path to replace cash and cards. Apple is expected to not charge users of the new payments service, so the company's only profits from the platform would come from those who opt-in to use the Apple/Visa debit card, which some banks are concerned about.

The potential of Apple getting its own debit card, however, is not sitting well with some bank executives, sources told Recode. Some plan to raise their concerns with Visa next week during an annual summit that the credit card company is hosting for its bank partners.

There remain many questions in regards to Apple and Visa's potential partnership, including whether or not concerns from banks would scare Visa away, or if Apple would launch an enticing enough rewards program to convince people to ditch their current credit or debit card for the new one. To gain the most traction, sources believe that Apple could be targeting teens and young adults with the new service, because the pre-paid card would make it easy to spend the money sent to them from friends and parents through "Apple Cash."

LordQ
Didn't we hear a rumour last year that we would be able to make payments through iMessage with Apple Pay? This sounds like a great idea.
Score: 7 Votes (Like | Disagree)

drewyboy
I probably wouldn't use it. Why? It's not cross platform. When it comes to money, it needs to be as easy as cash to anyone on any platform.
Score: 6 Votes (Like | Disagree)

This is largely because of banking cartels boycotting Apple Pay.

The banks are trying to protect their incumbency status by not offering Apple Pay services to their customers.

I always saw it as likely that Apple might one day offer banking services, maybe after doing AR and something automotive, to keep on a growth track. I now think the intransigence of banks in blocking Apple may have just accelerated the rise of what far-sighted banks were hoping to prevent: Apple Bank.

Just look at Switzerland and Australia, even Barclays in GB. Active boycottause in the first two markets and a failed hold out in the third.

Then think about larger markets in Europe and elsewhere where Apple isn't making traction. This likely isn't because Apple or the card networks don't want this, it is because the banks issuing the cards don't want to.

Given this situation, Apple needs to make an end run around the blockage to keep moving forward.

By being forced into this situation, banks have forced Apple to stick its nose into the banking sector's tent and as with the camel, once the nose is in the tent, soon the whole camel follows.

Why Visa? Because it's the most widely accepted card and because MasterCard seems to be very active on its own with initiatives like biometric credit cards (although I think these will be DOA, they may inhibit MC from doing something with Apple at this time.)

I also think by virtualizing the card the costs associated with plastic and paper administration and distribution disappear and Apple could have a strong argument for customers with cheap or free annual fees.

It should be noted that Apple looked into something like this before launching Apple Pay, but as said by Tim Cook "people their cards and rewards programs" so they went with that. In the markets where fees are high, rewards are low, and banks are blocking it is no wonder Apple is going it alone now.

All this is bad for banks and is self inflicted, but is great for customers!

Yup, it's called business. If you think for two seconds that Apple really cares about you, I've got a bridge to sell. Apple isn't some savior.

I'd personally like to stick with the banks solution which has been in the works for a few years and will be available mid to late this year. It's called Zelle. Heck, if you're using one of the major 20 banks an using their internal p2p, that's actually Zelle. They just haven't official allowed cross payments and formally launched the brand yet.
Score: 5 Votes (Like | Disagree)

macduke
This sounds like more than payments to friends and more like a bank. Why does Apple want to be a bank? They already have plans to be a streaming TV and production company, an auto company, an augmented/virtual reality company, a display company (again soon) and a cellular network in addition to being a fitness and health company, wearables company, smartphone and tablet company, a laptop and desktop computer company, headphone and speaker company, wireless router company (maybe not for long), an accessory company, a payments handling company, music purchasing service, streaming music subscription service, radio station, movie/TV purchasing service, movie/TV rental service, App Store distributor for phones/tablets/computers/TVs, an eBook retailer, retail store for third party products and accessories, consumer technology training service, cloud storage/email/calendar/photo hosting company, a smart home company, consumer creative/office software company, an instant messaging company, a TV set-top box/gaming device company, professional audio/video software company. Even up until recently they were an ad network with iAds and they've tried being a social network a few times. It's just way too much!

I wouldn't be surprised if in my lifetime—in addition to the rumored stuff—I see Apple Loans, Apple Home, the iBattery, Apple Kitchen, the iDrone, the iBike, Apple Clothes, the iLight, Apple Healthcare, Apple Contacts, and Apple Brain. This is all assuming that the diversity of Apple's endeavors doesn't destroy the company in the process. Maybe they need to split things like Google did with Alphabet. The world is going to be ruled by huge conglomerates. Bleh…
Score: 5 Votes (Like | Disagree)

Chupa Chupa
Debit card seems a bit complicated -- it either has to be linked with a bank account or pre-funded. No thanks to either. I don't really get the need for this at all. Plenty of good services out there now.

The more Apple tries to mimic 3rd party apps and services built on the iOS ecosystem the more is dissuades devs from creating those apps and services because it becomes a proof of concept and once it's proven Apple pounces with a carbon copy and wipes the entrepreneur out. This isn't new for Apple -- happened all the time with OS X in the Jobs era. But Apple is more dependent on devs now than with OS X which thrives more on Adobe and MS.
Score: 4 Votes (Like | Disagree)

69650
If you could load money onto Apple Cash at shops, ATMs, banks, etc then spend it directly at any wireless payment point without the need for a debit/credit card it would appeal to a lot of people who don't or can't use a debit/credit card.
Score: 3 Votes (Like | Disagree)
Read All Comments