The iPhone continues to be the most popular smartphone among teens, according to data gathered by investment firm Piper Jaffray in its most recent semiannual U.S. teen survey. 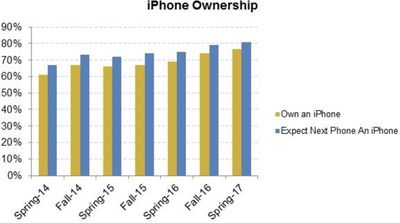 Piper Jaffray attributes the jump in interest to the upcoming 2017 iPhone, which is expected to include an OLED display with an edge-to-edge design, a glass body, a faster A11 processor, no Home button, and wireless charging capabilities.

Apple continued to grow smartphone share among teens with 76% of teens owning an iPhone vs 74% in Fall-16. We view the survey as a positive data point on iPhone 7 demand and excitement around the upcoming launch of the 10th anniversary iPhone (iPhone X)

Teen interest in smart watches has also continued to grow, with interest in the Apple Watch up slightly. 13 percent of teens surveyed said they plan to buy an Apple Watch in the next six months, compared to 11 percent in the spring of 2016.

While iPhone adoption among teens could see significant growth in the fall with the release of a new line of iPhones with exciting new features, Apple Watch growth may remain stagnant as rumors have thus far not pointed towards major changes.

For the teen survey, Piper Jaffray accumulated responses from 5,500 teens in the United States with an average age of 16.

MagnusVonMagnum
When mommy and daddy are footing the bill, everyone wants an iPhone! When the kiddies finally are pushed out on their own (or at least into the basement), suddenly that cheaper Android looks a whole lot more attractive! :D
Score: 32 Votes (Like | Disagree)

So Apple is 71% Lifestyle Gadget company and 29% a computer company.. Its making sense now.

Apple has been a CE company and not simply a computer company for many years now. It's not new nor did Cook take the company in that direction.
Score: 31 Votes (Like | Disagree)

coolbreeze
iMessage hook-in fully at work here. You don't want to be that outcast with a green bubble, screwing up the group chat.

jjjoseph
So Apple is 71% Lifestyle Gadget company and 29% a computer company.. Its making sense now.
Score: 17 Votes (Like | Disagree)

We are using an ATARI Mainframe.. Its running great.. We program with punch cards.. Good Technology will never die.
Score: 12 Votes (Like | Disagree)
Read All Comments