Feral Interactive announced today that F1 2016 is coming to the Mac on April 6 and has been refined using Apple's new graphics API, Metal.

F1 2016 is Codemasters' official game for the 2016 FIA Formula One World Championship and features extensive online multiplayer game modes that allow players to compete against up to 21 rivals on any of the 21 Grand Prix circuits. 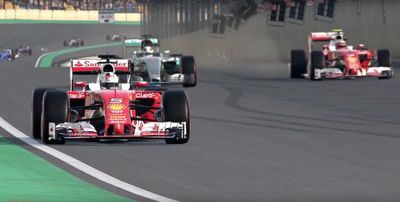 "It's been three years since a new F1 game graced the Mac and a lot has happened since then," said David Stephen, managing director of Feral. "F1 2016 is a massive step forward for the franchise, greatly improving upon the fastest and most thrilling on-track racing experience in gaming."

At the heart of the game is an all-new career mode that Feral is calling the most immersive, in-depth mode ever featured in the franchise, and lets players pursue legendary status in the sport over up to ten back to back Formula One seasons.

The game includes the iconic Safety Car and Virtual Safety Car, the paddock, key figures from the world of F1 and all the drivers, teams and circuits. Players can also experience the height of the pre-race tension and feel the pressure of the all-important start with the introduction of the Formation Lap and manual starts.

maflynn
This reminds of Macs during he PPC platform days. Games came out year (or years later) and cost top dollar. Not much as changed it seems :(
Score: 7 Votes (Like | Disagree)

Then its high time you update your computer as its 5 years old, What did you expect.

Lol, you should tell Apple that too.
Score: 5 Votes (Like | Disagree)

Doesn't mean it’s the same game. We’ll have to wait and see if the Mac port has the same functionality.

It is the same game... it is a port by Feral, with steam play on Steam it means the game is the same. The only difference is Mac versione is faster thanks to Metal.
Macrumors should be renamed whinerumors
Score: 5 Votes (Like | Disagree)

It's precisely the same money ('http://store.steampowered.com/app/391040/') you'd pay for the Windows version of the game, which is still the most current release of the franchise: F1 2017, covering the latest season, isn't even announced.
Score: 5 Votes (Like | Disagree)

MrGimper
But the 2017 season has just started.....
Score: 3 Votes (Like | Disagree)
Read All Comments