Apple is planning another shakeup within its retail stores, according to a source who shared the company's plans with MacRumors. At the end of April, Apple plans to eliminate certain retail positions, including Business Manager, Business Events Lead, Events Coordinator, and Events Lead.

Apple Store Leaders began informing affected employees about the change earlier this week, and many were caught off guard by the sudden sunsetting of specialized positions that have long existed at retail stores. 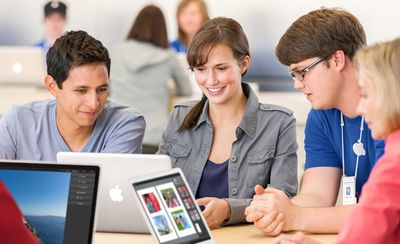 "These managers have established relationships with various small and medium businesses in their markets," said the source. "Their position is highly specialized and often times not easily understood by retail leadership who do not have experience in B2B sales." Existing managers, senior managers, store leaders, and market leaders are currently unfamiliar with the "complex sales cycles involved with B2B engagements," so Apple's retail change could have a significant impact on business sales.

Employees who currently hold positions that are being eliminated have been told they can take a lower level (also lower paying in many cases) position or take two months of severance pay. "This comes as a rude awakening to employees who have always felt Apple has had their best interest," said the source.

Managers and affected employees have been notified about the imminent change, with a broader announcement planned for an all-hands meeting that will take place on Sunday, April 23. Apple may share more information on the reasoning behind the elimination of the positions and its future retail plans at that time. On its "Jobs at Apple" page, Apple has already removed "Business Manager," as an option, a change that was made recently.

needsomecoffee
Hello Staff: This is Angela. We are terminating Business Managers. Affected individuals will be considered for soon to be announced Fashionista Manager position. Preference given to those who can best optimize watch-band color to specific runway events. Anyone who has sold > 1 Edition Watches and/or knows a Kardashian is top of the list. Best, A.
Score: 34 Votes (Like | Disagree)

LordQ
What's happening to this company?
Score: 33 Votes (Like | Disagree)

Corporate speak never ceases to amaze me... and by amaze me I mean severely disappoint. People are being let go, unemployed, not sent vacationing in Hawaii.
Score: 31 Votes (Like | Disagree)

Their position is highly specialized and often times not easily understood by retail leadership who do not have experience in B2B sales.

There's A LITTLE extra expertise about taxes and such, but they were all vastly overpaid for what they actually did. They weren't doing cold calls, the business just walked in. You could train a specialist to do the majority of their work in an afternoon.
Score: 29 Votes (Like | Disagree)
Read All Comments