Apple today released a new software update for the Apple Watch, upgrading watchOS 3.1.3 to watchOS 3.2. watchOS 3.2 is the second major update to the watchOS 3 operating system that was released in September of 2016. watchOS 3.2 has been in testing since January 30 and Apple seeded seven betas ahead of release.

watchOS 3.2 can be downloaded through the dedicated Apple Watch app on the iPhone by going to General --> Software Update. To install the update, the Apple Watch must have at least 50 percent battery, it must be placed on the charger, and it must be in range of the iPhone. 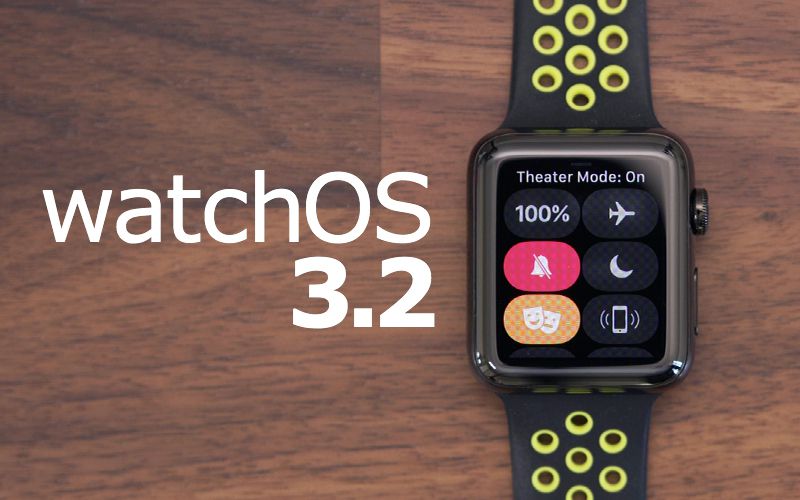 An iPhone running iOS 10 or later is required to download the new software, but it is available for all Apple Watch models.

watchOS 3.2 introduces Theater Mode, which is designed to let Apple Watch owners mute the sound on their device and disable Raise to Wake, preventing the screen from lighting up with arm movement.

Apple Watch users are still able to receive haptic feedback-based notifications, and incoming information can be viewed by pressing down on the Digital Crown or tapping on the screen.


The update also brings SiriKit to the Apple Watch, letting users ask Siri to do things like send messages, send payments, book a ride, log a workout, make a call, or search through photos. SiriKit has been available on iOS devices since the release of iOS 10, but is new to the Apple Watch.
Related Roundups: Apple Watch, watchOS 6
Buyer's Guide: Apple Watch (Neutral)
113 comments

LordQ
Hope the amazing battery stays the same as it's been since 3.1!
Score: 10 Votes (Like | Disagree)

Theatre Mode is definitely not new. On older versions before watchOS 3.2 go to settings and go to general then select wake screen then switch the toggle off on Wake Screen on Wrist Raise and now I am able to see the time every time I press on the screen or Digital Crown.

Yep. This has always been a feature. However this is not what theater mode is. Theater mode is specifically related to the quick toggle button that they've added to the control center of the watch face allowing you to perform the action you're talking about quickly and easily without having to do multiple taps.
Score: 5 Votes (Like | Disagree)

An apparent and aggravating bug in the installer… it threw up a message saying that I had to have the watch on the charger anytime it's under 50%... yet, my watch was at 89%. I was not allowed to proceed until I put my watch on the charging cable. Now I have to wait...

You always have to have the watch on the charger to update the software
Score: 3 Votes (Like | Disagree)

Theatre Mode is definitely not new. On older versions before watchOS 3.2 go to settings and go to general then select wake screen then switch the toggle off on Wake Screen on Wrist Raise and the screen lights up and I'm now able to see the time every time I press on the screen or Digital Crown and this is on watchOS 3.1

Theatre mode IS new. What it does may not be (it combines 2 steps, disabling raise to wake, and invoking silent mode)

Much simpler than faffing through the settings....
Score: 2 Votes (Like | Disagree)

What ? I've always been able to toggle off raise to wake.

This theater mode is just one swipe and a tap, and also mutes the sound. It's much faster this way instead of fumbling through settings in app or on watch.
Score: 2 Votes (Like | Disagree)

Thus his statement that "it hasn't" previously been a feature.
Score: 2 Votes (Like | Disagree)
Read All Comments