The iMessage App Store turned six months old this week, and the app analysts at Sensor Tower have decided to see where Apple's miniature app store stands among users and developers following an initial launch rush last year. According to Sensor Tower, more than 5,000 apps have either added iMessage features, or launched exclusively on the text message-based App Store.

Unfortunately, while the growth is noticeable -- and on par with the original App Store in 2008 -- it has begun subsiding on a month-to-month basis, with Sensor Tower noting it is "seeing signs that the initial rush of excitement over iMessage apps is fading among developers." From September to October the number of iMessage-enabled apps grew 116 percent, from 400 to 1,100. By the end of November, the iMessage App Store had grown 108 percent to include around 2,250 apps. 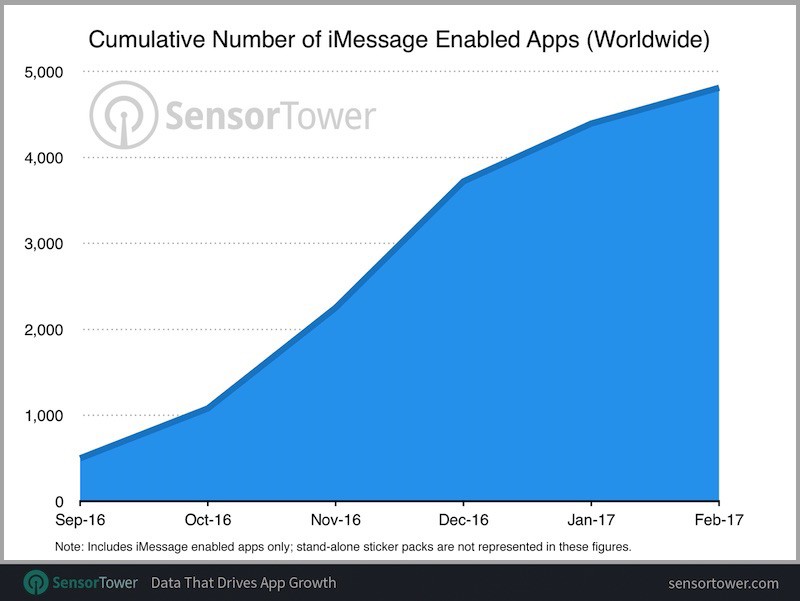 Sensor Tower points to confusion over the iMessage App Store's UI and app discovery that could be leading to an overall lack of user interactivity with the apps, and subsequently resulting in developers' fading interest. The analysts still look forward to the iMessage App Store's "real test" of growth down the line as iOS 11 approaches later in the year.

Any new platform will see an initial surge in offerings due to the aforementioned excitement, rallying cries from the platform holder, and the associated rush by developers to ensure that they’re capitalizing on (what they hope will be) the next big thing. The real test for the iMessage App Store’s catalog will be how its growth looks for the rest of its first year.

Still, consumer platforms such as Apple’s latest are driven by the steady availability of compelling software, and the cadence of releases can say a lot about developer confidence—which, in turn, is reflective of what and how much users are consuming.

Games are the most popular of the iMessage apps, and the category includes regular apps that create iMessage versions with sticker compatibility without any specific gaming features. Following games are Entertainment, Utilities, Social Networking, and Photo & Video apps.

In a bid to bring more awareness to iMessage apps -- and stickers specifically -- Apple this week launched a new ad to promote the wide array of stickers that users can download and share within Messages. The live action commercial featured people running around and sticking colorful, animated stickers, including some from Disney and Family Guy, on everything from other people to food.

brian3uk
At what point is there just a glut of chat apps and stickers and people get tired of it. I know it was a bid to get younger users to use imessage but I'm on the younger side of things and it's just too much. Facebook, messenger, snapchat, twitter, instagram, all offer the same stuff and the apps are getting so bloated. Just sending a photo from your camera roll with imessage is like 5 taps away now. Simplify!
Score: 14 Votes (Like | Disagree)

NinjaHERO
This is how I know I'm getting old...I don't understand the appeal of stickers. lol
Score: 10 Votes (Like | Disagree)

itsmilo
It is just inconvenient to use. I always forget its there and mostly just use emojis
Score: 9 Votes (Like | Disagree)

jerry16
Not surprising - the entire interface is a convoluted mess. It takes way too many taps to do anything with it. It's very un-Apple like.
Score: 7 Votes (Like | Disagree)

RoelJuun
Honestly never found a reason to use any of them. For me iMessage is about...iMessages (and once in a while sms).
Score: 5 Votes (Like | Disagree)
Read All Comments