Pandora's own entry into the on-demand streaming music market, called Pandora Premium, is officially launching this week to a select group of invitees who sign up for a chance to gain access on the company's website. Pandora Premium is the result of the company's acquisition of "key assets" and employees from Rdio back in 2015. Late last year, Pandora finally detailed what its new Premium service would look like at a special event.

Unlike in the base Pandora app, Pandora Premium allows its subscribers full, on-demand control of what they listen to thanks to the inclusion of playlists and a personalized search feature, which surfaces unique items based on each user's own listening history instead of what's most popular at the time. The service includes learning algorithms that can auto-fill playlists after adding a few songs to match the previous tracks' genre of music. 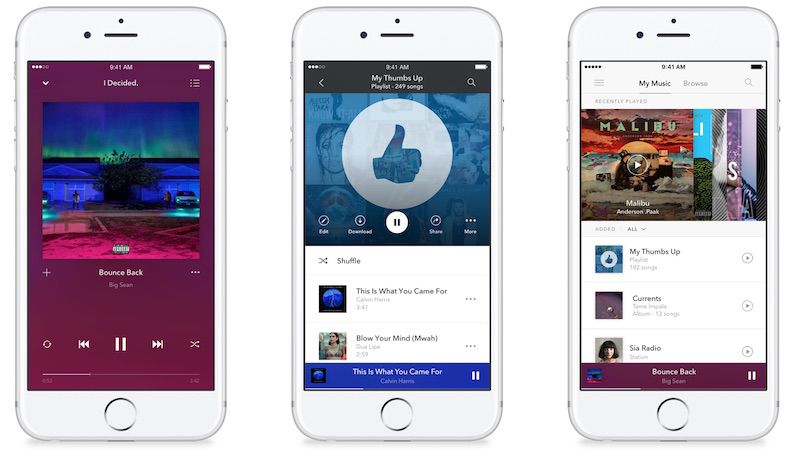 Users will also be able to download songs to listen offline, browse content they've previously thumbed up, and view Pandora Premium's Browse section to see curated artists aimed specifically at their own music tastes. Those with Pandora Plus will get six months of Pandora Premium for free, and following the small launch of invite-only users, Pandora Premium will open up for all users in the next few weeks.

Playlists, not worklists: Start a playlist with one or two songs of your choice, tap “Add Similar Songs” and put the power of Pandora’s Music Genome Project to work to create the perfect playlist for any activity, mood or party.
All your thumbs up: Every song you’ve thumbed up on Pandora is immediately available in your “My Thumbs Up” playlist. Thumb up a few tracks on any Pandora radio station and Premium will automatically create a new playlist of these songs too.
New music for you… and only you: Browse is stocked with personalized suggestions for the latest releases from current and soon-to-be favorites whether you listen to classical, metal, jazz, hip hop, country, and everything in between.
Offline mode: Download albums, songs stations or playlists you want and bring an end to those moments of deafening silence when you lose a signal.
Search that knows you: Pandora’s team of curators, music analysts and data scientists have sifted through tens of millions of tracks to help you quickly find what you really want. No more wading through covers, karaoke versions or tribute tracks to get to your favorite tune.

“We have very grand ambitions for what this can be,” Westergren said. “If we look around at the space right now, we just don’t think that there’s a product that’s done it right. No one has solved the ease of use and personalization part of the on-demand world. I don’t think there’s really a true premium product out there yet… we think we’re bringing something really different here.”

In an update last December, Apple Music topped 20 million subscribers after 18 months on the market. Apple's and Pandora's rival, Spotify, announced that it reached 50 million paid subscribers earlier this month.

To get on the invite list for Pandora Premium's free trial, visit the company's website here. Invites will be sent out on March 15.

jacobh101
Pandora fails to understand that they need a bigger song library...I always think to myself "I just heard that song like 20 minutes ago"...
Rating: 4 Votes

I'm not sure Pandora Premium will be worth it. For $20 more than I already pay for Pandora Plus and iTunes Match I could get a year of Apple Music. I wanted to keep Pandora because it streams with my Amazon Echos, but their library is so limited. I discovered more music using Apple Radio.


For me, nothing beats Pandora for radio. I've tried Apple music, I've tried Amazon's Stations, all of them, in my opinion fall short. The problem is, for me at least, they others are human generated
(or at least not very advanced algorithms), which is fine, but makes them too non-specific meaning if I want a station based on James Taylor's Fire and Rain, I don't suddenly want a more upbeat song popping up (I haven't tried youtube red, but based upon up next recommendations it would do a better job then Apple/Amazon although once again it's based on millions of users playlists, selections, etc.) None of the other services have solved this problem which is why I still use Pandora even though I have iTunes match, and prime music (well that and I pay the $4 a month price).
Rating: 2 Votes

This product space is maturing fast. I see why Apple is going with the Radio angle instead of just offering music downloads.


Remember the first ten minutes of Beats1, when everyone thought, "hey, this is pretty cool" only to quickly realize you had to really, REALLY like hip-hop in order to listen to it for more than eight minutes? Why have they not come up with other Beats1 stations that cater to the rest of us?
Rating: 2 Votes

dwaltwhit
Customers win with competition. Customers lose when the competition shifts to "how many exclusives can we get?"
Rating: 1 Votes

Pandora fails to understand that they need a bigger song library...I always think to myself "I just heard that song like 20 minutes ago"...

bfChris2
Of course the price point will be important to Pandora Premium's success. However, I think this is going to be an EXCELLENT PRODUCT. I have evaluated Apple Music, Spotify, and Amazon Music. They let me choose to listen to specific songs, but they're hopeless at giving me a consistent playlist. IOW, if I don't want to spend the time to curate my own playlist, they're no good. I used to pay for premium access to di.fm (Digital Imports). DI used to play excellent curated playlists of various types of techno and electronic music, but beginning in Aug-Sep 2016, the playlists began to include more lyrics. More and more of their streams began to be infected with lyrics, until in January 2017, it seemed all style streams in which I was interested had vocalists distracting me from my activities.
Apple Music will not allow the user to "seed" a list, and no service is able to do what Pandora's Music Genome Project can do. I resurrected Pandora from the dustbin a month ago, and after several weeks of consistent music which never tossed in a wrong-genre tune, I subscribed to Pandora Plus. Music Genome Project is a tremendous asset; no other service is able to keep playlists on target song after song. I'm fed up with starting out listening to quiet piano, and 30 minutes later finding myself being screamed at by some hiphop-influenced pop track; this does not happen with Pandora.
The only thing Pandora lacks (other than bench depth) is on-demand song selection. Hooray for Pandora Premium!
Rating: 1 Votes

I'm super excited that this is almost here. I'm really glad it looks like they've retained a lot of the visual style of Rdio and am super hopeful that its spiritual successor will retain the other great parts of Rdio, like its queueing system, and smooth over some of the rough edges.


That's what I want! I lived in my queue in Rdio, and every other streaming service I've tried has failed in their queues (especially Apple Music, which seems to forget my spot in the queue every day when I open it...). Even if the queue is the only thing they bring over from Rdio, I'll be happy...
Rating: 1 Votes

djeeyore25
I'm not sure Pandora Premium will be worth it. For $20 more than I already pay for Pandora Plus and iTunes Match I could get a year of Apple Music. I wanted to keep Pandora because it streams with my Amazon Echos, but their library is so limited. I discovered more music using Apple Radio.
Rating: 1 Votes

Ooohh exclusivity!!! Pleaseee let me in!

Kind of a pathetic ploy, but it will work.

Then in a couple of months or minutes as the buzz died down, it will be opened up to Tom dick and Harry.

For me, nothing beats Pandora for radio. I've tried Apple music, I've tried Amazon's Stations, all of them, in my opinion fall short.


I have to agree. Apple Music and Spotify both fall well short of Pandora when it comes to radio. I do thoroughly enough SiriusXM, and that is the only reason I cancelled Pandora Plus. Google Play Music radio actually isn't that bad, but I believe that Pandora still reigns over the music streaming services.
Rating: 1 Votes
[ Read All Comments ]