The Twitter app for iOS devices was today updated to version 6.73.1, adding a small but important feature that allows users to have more control over the amount of storage space Twitter uses on an iPhone or iPad.

A new storage setting lets users see how much storage space Twitter is using for cached images and web content, and it offers an option for clearing stored data. Users can choose to clear Media storage or Web storage independently. Some Twitter users appear to have a dedicated "Storage" section, while others are seeing the information listed under "Data usage," so it's not clear what the final storage UI will look like. 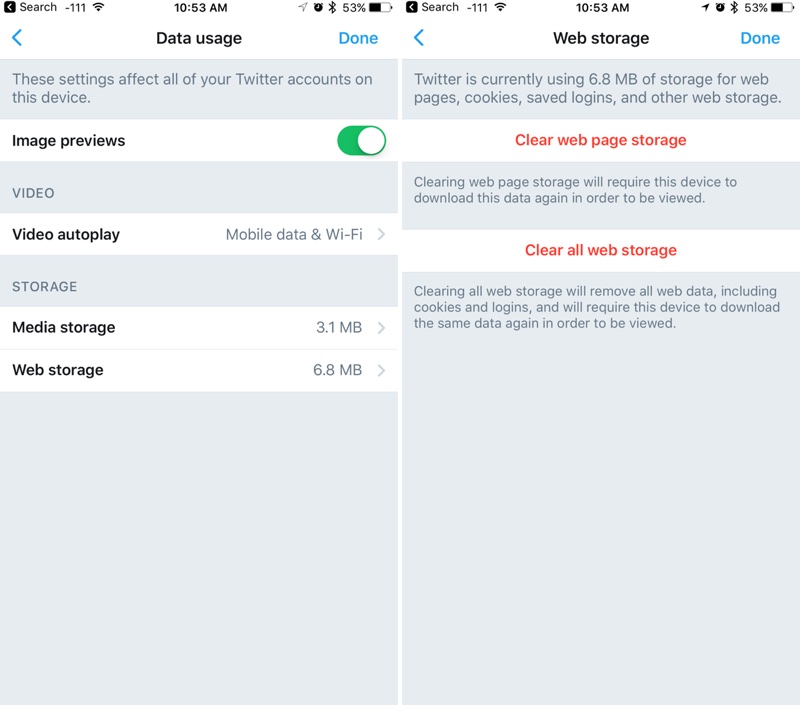 Twitter's new cache clearing option will be a welcome addition for users who frequently use the default app. Prior to the introduction of the storage setting, the only way to clear a large Twitter cache that was taking up a lot of space was to delete and reinstall the Twitter app.

Twitter for iOS can be downloaded from the App Store for free. [Direct Link]

itsmilo
This should be mandatory for any app
Rating: 16 Votes

Any app that caches vast amounts of media should be required to have this option.
Rating: 5 Votes

coolfactor
... and so continues to declining consistency of the user interface.

"Image previews" should be "Image Previews".
"Web storage" should be "Web Storage"
... etc.

These "new age" developers are really eating away at my patience.
Rating: 3 Votes

Adding a ‘clear’ button will only incentivise people to manual maintenance, like closing applications. Apps should simply be reasonable with caching and not use it as a sink.


Amen to that, with the additional requirement that all caching apps need to have the capability to automatically manage cache content with appropriate 'maximum cache size' settings.
Rating: 2 Votes

strayts
Now it's Facebook and Instagram's turn. It's absurd how much storage they take up.
Rating: 1 Votes

DrumApple
Spotify needs to do the same.
Rating: 1 Votes

Wow. It didn't take long at all for someone to find something to complain about.