Nest is in the process of making a cheaper edition of its Nest Learning Thermostat as well as a new line of home security products, according to someone familiar with the company's plans speaking with Bloomberg. Nest is said to be "seeking a bigger share of the connected home market" in its move to make a cheaper version of its flagship thermostat device.

The cheaper Nest Learning Thermostat would sell for under $200, while the current edition of the device is priced at $249 on the Nest Store. The cheaper model is believed to keep the same temperature learning functionality of the thermostat, but be manufactured with less expensive components and potentially do away with the current version's metal edges. 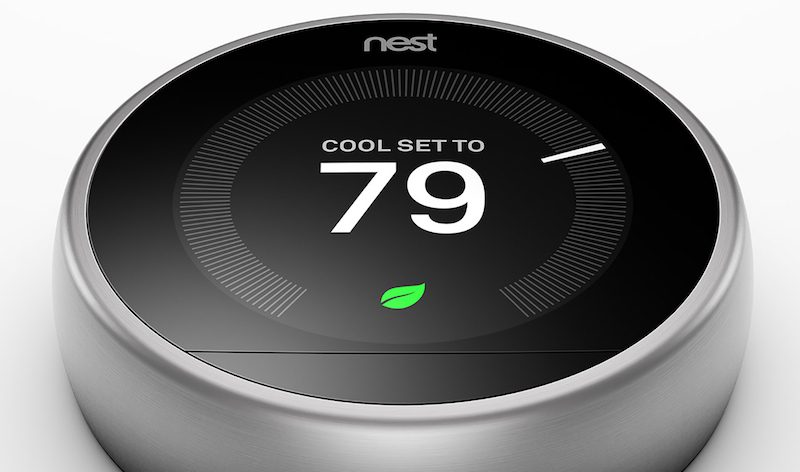 Nest is also said to be developing sensors that will act as expansions to existing thermostat systems, and allow users to control the temperature of specific rooms instead of just the entire home. The cheaper thermostat is predicted to launch by next year.

The company is working on a version of its "learning thermostat," which adjusts the temperature based on usage patterns, that would sell for under $200, the person said. The current version sells for $249. The cheaper model would include less expensive components and at least one internal prototype lacks the flagship model's metal edges, the person said.

A home-security alarm system, a digital doorbell and an updated indoor security camera are also in the works, representing potential good news for a company that has struggled to release many new products.

An all-new home security alarm system, digital doorbell, and updated indoor camera "are also in the works." The home security system will have a central hub with a keypad that connects to a collection of alarm sensors that users place on windows and doors.

After being set up, it will act like a normal security system and ring when the home is entered until the right code is entered on the keypad hub. A keyring fob accessory can also be used to initiate and disable the alarm in lieu of typing in a code. Like all of Nest's products, a connected iOS app will allow home owners to disengage the alarm to let specific people into a home when they are away.

An update to the Nest Indoor Cam could see a way for the camera to identify specific people within its range, according to the person familiar with Nest's plans, who also detailed the company's intention to launch a digital doorbell system with a video camera and face-to-face communication via the mobile app. The home security system is believed to arrive this year, the updated Nest Indoor Cam could launch as soon as this fall, and the digital doorbell is estimated to see a debut sometime in 2018.

Red Oak
Where the hell is HomeKit support? It will never come, which is why I'll have to switch mine out
Rating: 6 Votes

- incorporating it into your home automation recipes which involve devices from multiple vendors (lighting, locks, doors, etc). these can be geo fenced, timed, or kicked off via siri. Using one automation system is better than two or more, which is the world we'd live in if nobody supported HK like Nest.

- HomeKit is the most secured of IoT devices, due to authentication and encryption chips.
Rating: 5 Votes

For me, saying "Hey Siri, lower the upstairs temperature two degrees" is a lot more convenient than having to futz with an app at 2 AM. Don't do it a lot, but it's handy when I need it.

Assuming Nest completely copies Ecobee's remote sensor idea, you could use their occupancy sensors to trigger HomeKit rules. Turn lights on/off, change the temperature to a certain level while someone is in a certain room (home gym), etc.

HomeKit isn't an app, it's a foundation used by many apps. Ecobee's native app uses HomeKit, for example. You can use it to create scenes like "Good Morning", which could set your temp to something predefined, turn on certain lights, maybe start coffee brewing.

Other HomeKit apps (like Apple's Home, or Elgato's Eve) will be able to see/modify that scene. This lets companies (like Ecobee) have control over how they want their app to look and feel, but still let their hardware play with others.
Rating: 4 Votes

shiseiryu1
Nest would have been so much better off had Google not bought it. What have they created since then?...basically nothing except rebranding Dropcam which wasn't that good of a camera to begin with.

I'm super disappointed about lack of HomeKit support because it still is the best looking thermostat. The rest look cheap and plasticy in comparison.
Rating: 3 Votes


Mike are your Nest Cams disconnecting from the wifi? If I do the wired cam system I'll update you on how easy/hard the install went.
Rating: 1 Votes

HobeSoundDarryl
Maybe Nest should just take the current one, put it in a different case, maybe jettison a useful something out of it, add a gimmicky something inside of it and, most importantly, raise the price (& profitability) by calling it the Nest Edition. ;)
Rating: 1 Votes

nuckinfutz
[USER=60001]@aristobrat[/USER] awesome I've been looking for a good source for IP Cameras. There are a lot of sites but not many lively ones discussing the newest stuff. Thanks for the link. I like the idea of running Ethernet and POE that gives me a lot of choices to upgrade when I want.
Rating: 1 Votes

Some people just believe what they want to believe, and no amount of reason will persuade them.


Agreed, I have been using Nest since 2011 (save for about 3 months that I tried Ecobee), that's 6 years worth of savings and convenience. I don't understand why anyone would go through life so concerned about a device that (in the grand scheme of things) doesn't really cost that much, even at MSRP which I didn't pay for either of mine. It has likely already paid for itself a time or two in utility savings. The convenience of monitoring usage and being able to adjust the temperature remotely are just icing on the cake.
Rating: 1 Votes

What are you talking about? If you don't want the Nest to EVER be internet connected, simply don't connect it to the internet when prompted. It will work out of the box as a... wait for it... thermostat! You will loose remote monitoring capabilities but it will still learn your schedule and help you save money on your utility bills.

This is also what would happen if Nest disappeared or closed their doors tomorrow, your thermostat wouldn't need to go into the trash, it would just go on working as a... wait for it... thermostat! Which, if you never wanted it connected to the internet in the first place, wouldn't concern you anyway. Nest still supports all 3 generations of their product, I think they started in 2011. I don't see them going anywhere soon, especially now that they are owned by Google.

But by all means, keep going through life with those concerns.

Why exactly should I buy a remote-control enabled thermostat if I am to use it without that functionality? What I was saying was that I want to be able to run the infrastructure needed for remote access so that it is vendor independent, i.e. on my server if I choose so.

With regard to nest/google being here for a long time: https://www.wired.com/2016/04/nests-hub-shutdown-proves-youre-crazy-buy-internet-things/

That is the sort of thing I want to avoid and the way to avoid it is not to create demand (=buy) these forever-vendor-dependent devices.
Rating: 1 Votes


It adds nothing, absolutely nothing. I got a Nest Gen 2 for Christmas around 2012, we LOVED it. When EcoBee came out with a Homekit thermostat, we switched, we HATED it. Siri rarely understands the most simple of commands, and we found ourselves using the app just like we did with the Nest. Shortly after the Gen 3 Nest came to market so I sold the Ecobee and went back to Nest.

You really only mess with it when it is new and you are getting it all set up and ready to go, and maybe if you are new to this type of tech you might check it frequently for a few months. After that you basically forget it, which is how I think this type of technology should work. I check our usage about once a week to see if there are any anomalies, other than that it just does its thing in the background of our lives. If you have a family perhaps you might need or want more control, everyone's use case is probably different. We don't have kids, just two mutts and we work a typical M-F 8-5 schedule.

Pretty sure the Gen 3's already sell for under $200 on eBay everyday. I think I got our Gen 3 on B&H for under $200 around Christmas a few years back.