Launching the free Mac app prompts users to sign in to their Amazon account, after which a window opens showing the familiar blue Alexa ring on the desktop. Click and hold on the ring with the mouse cursor, and provided an internet connection is active, the virtual assistant listens and responds to the sort of spoken questions and commands usually directed at Amazon's Echo range of smart speakers. 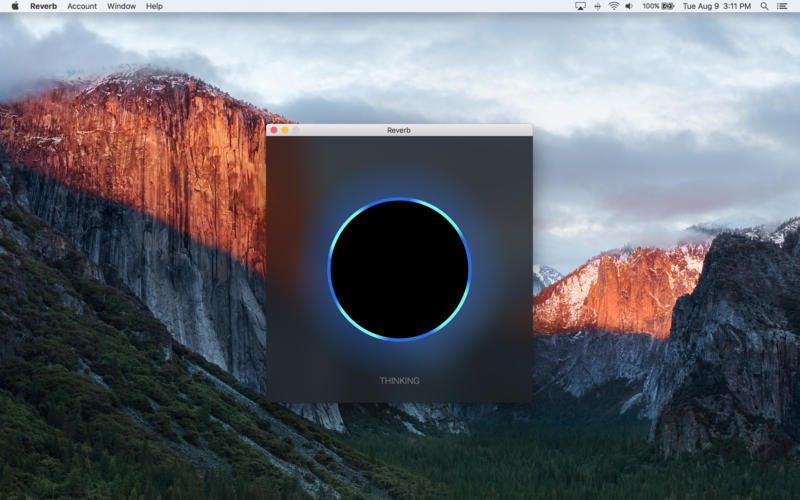 The iOS app works similarly, and the latest version of Reverb uses Alexa v2, which adds support for news flashes, timers, alarms, long form audio, audiobooks, and more. It can also interact with smart devices that are compatible with Alexa, such as lights, switches, and thermostats compatible with Samsung SmartThings, WeMo, Philips Hue, and others. The only Alexa service Reverb does not support is playing music, due to restrictions Amazon has placed on using Amazon Music in apps.

In addition to the above, users can enable third-party skills through the app with a simple voice command – "Enable Bird Songs", for example. In testing, the Mac app also responded to new skills enabled through Amazon's Alexa iOS app, which officially supports and integrates with the Reverb app for iOS.

The apps provide a convenient solution for Echo owners wishing to make Alexa available in, say, their office room or study, without having to buy an additional supporting device. It also offers prospective Echo buyers an opportunity to test the service prior to making a purchase, and at the very least gives curious Mac users a chance to compare Alexa's and Siri's smarts side by side on their desktop.

itsmilo
Only downloaded it cuz i fully expect Apple to remove it lol
Rating: 7 Votes

BTW everyone is this app safe to link to your Amazon account ?

Yes, we use a web view and you provide your credentials directly to Amazon. We are never given your password.
Rating: 4 Votes

What is the chance of getting this app on the Apple Watch? Is it even possible on that platform?

Telos101
This is cool! Quick download before the iron-clad fist of Apple strikes! :D
Rating: 2 Votes

BTW everyone is this app safe to link to your Amazon account ?


Good question. It appears to use Amazon's log-in which I assume works like FB's login options across the web. Meaning it should bypass the developer and connect directly with Amazon keeping us as safe as Amazon's security measures allow.
Rating: 2 Votes

Good question. It appears to use Amazon's log-in which I assume works like FB's login options across the web. Meaning it should bypass the developer and connect directly with Amazon keeping us as safe as Amazon's security measures allow.


That sounds about right. Also Rain is a partner agency with Amazon on their Skills Hub.
Rating: 2 Votes

I wouldn't give Amazon my apple id credentials either.


You give Amazon your Amazon credentials, not your Apple credentials.

Reverb doesn't get any credentials for anything.


Probably sensible... too late for me, then again I could just wireshark it and find out where all my credentials are going!


You actually can't. The credentials were a one time thing directly to Amazon. They're not in the data to and from Reverb after that. Reverb and Alexa use HTTPS v2 and if you try to get in between the connection to watch data, that disrupts the security and data will no longer be sent properly until you stop monitoring it. It's a safety feature to keep the data safe built into iOS and macOS.
Rating: 2 Votes

djeeyore25
Between my Echo devices and these apps, Alexa is following me everywhere.
Rating: 2 Votes

Remove it, because what?

There are dozens of similar apps on the AppStore, including Google's.

Much more likely that Amazon removes it


Amazon is aware of this app and allows it. We are following all their rules of security and features.
[doublepost=1487514072][/doublepost]

My pleasure. This is directly from Amazon's site:

Reverb shows as one of my authorized, FYI


The access to modify your account is only used by your commands to Alexa to enable skills, change shopping lists, etc. The app doesn't directly make any changes to your account itself.

You can go to Amazon's settings for content and devices and remove Reverb if you wish when you no longer want to use it.
[doublepost=1487514282][/doublepost]

Just downloaded this. Do not have any Echo devices yet, this could be a nice way to play with some of the features and get it working with IFTTT.


An Echo isn't required. Revrb is just as functional without one. Alexa Voice Service doesn't allow things like Amazon Music or shopping, but that's true whether or not you have an Echo.
Rating: 2 Votes

Between my Echo devices and these apps, Alexa is following me everywhere.

Oohhh, you'd better be careful, I know from experience how terrible it can be to have a woman stalking you. Best do something about that before it gets out of hand :p
Rating: 2 Votes
[ Read All Comments ]