Apple has fallen to fifth place in China's booming smartphone market, where combined sales reached 131.6 million units in the fourth quarter of 2016, accounting for nearly a third of worldwide shipments. The Q4 figure confirmed the highest ever annual amount of smartphones sold in China, according to market research firm Canalys, with shipments for the year reaching 476.5 million units, rising 11.4 percent from 2015 levels. 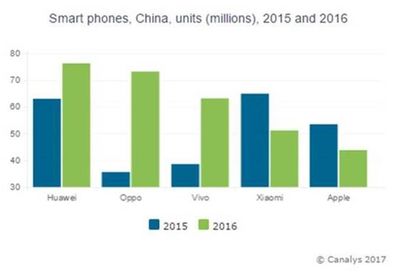 Xiaomi became number four in the China smartphone market, while Apple fell to fifth place. Xiaomi shipped a total of 51.4 million units of smartphones with a 21 percent year-on-year decline, while its market share decreased from 15.2 percent in 2015 to 10.7 percent in 2016, the lowest since 2013. Apple shipped 43.8 million units of iPhones throughout the year, a year-on-year decrease of 18.2 percent.

Huawei's success in China continued apace on the strength of its flagship products, said Canalys research analyst Jessie Ding. "While Apple, Samsung and Xiaomi are all in the process of adjusting their strategies in China, Huawei took the opportunity to consolidate its position in the tier-1 and -2 cities." The lull also allowed Huawei to attack Oppo and Vivo's backyard "in tier-three and tier-four cities," Ding noted.

Last year Apple experienced its first ever year-over-year decline in the Chinese smartphone market, with the company's phones continuing to be outpaced by cheaper alternatives and the iPhone 7 failing to kick up a frenzy among consumers compared to previous launches, according to analysts.

Apple faced a similar story at the beginning of the current year. Despite recording record results, Apple's Q1 2017 earnings call revealed revenue was down 8 percent in China, but CEO Tim Cook claimed half of that decline was down to currency devaluation. Cook said that while China was "not without challenges", he remained "encouraged by improvements" going into the second quarter.

Analysts have previously suggested that Apple's decline in China has been compounded by loyal users taking a year off upgrading in 2016 in anticipation of 2017's "iPhone 8". If so, Apple's success there depends on whether the upcoming phone can live up to the hype.

"China and Hong Kong are still the hardest-hit areas in Apple's global top ten market," according to Ding. "The outlook remains bleak for Apple to get its China performance back to its heyday of 2015. As with consumers in other developed markets, China's consumers are awaiting the 10th anniversary of the iPhone with very high expectations."

The iPhone is not for everyone, it's for those who want the best phone.

The iPhone is not for everyone, it's for those who want an iPhone. Fixed that for ya.;)
Score: 47 Votes (Like | Disagree)

Those china phone are so cheap, I could have buy a few of that for the price of 1 iPhone, obviously Apple can't beat those raw numbers. But per device revenue, iPhone is still one of the top.

Could get those china phone as burner-phone and throw away if damaged.

Not all the China phones are cheap. There are higher-end phones that are full spec phones with all the features you want. The difference? They aren't selling them at 50% profit margin, and those companies don't maintain billions of dollars cash made off their high profit margins. Apple COULD beat those numbers if their phones weren't upwards of $1000 USD.
Look around and see what some of these Chinese companies are offering for a couple hundred bucks. Phones with features that you'll not find even in Apple phones. It's actually pretty amazing what you can get for a few hundred dollars.
Score: 29 Votes (Like | Disagree)

Telos101
Why do I get the feeling the iPhone 8 won't live up to expectations? :rolleyes:
Score: 24 Votes (Like | Disagree)

The iPhone is not for everyone, it's for those who want the [s]best[/s] most expensive phone.

The iPhone is not for everyone, it's for those who want the best phone.

You are entitled to your personal beliefs. But it's just that: A personal belief. The iPhone with its crippled OS is the last phone that I would buy. Huawei and several other companies offer a much better value. And after all, smartphones are just consumer products with an extremely short lifecycle.
Score: 19 Votes (Like | Disagree)

FixOrr
It seems everybody has missed a very important point, subtle but incredibly important. For those who have never worked or lived in Asia this will sound strange but the number '7' is bad (bad unlucky in the asian psyche) whereas the number 8 is good (incredibly lucky). So If Apple focus on the number '8', I predict a large growth in Asian sales and riot in the shops.
Score: 11 Votes (Like | Disagree)
Read All Comments

Monday February 6, 2023 10:13 am PST by Juli Clover
Apple today released new tvOS 16.3.1 and HomePod 16.3.1 software updates, with the software coming two weeks after the tvOS 16.3 and HomePod 16.3 updates were released. According to Apple's release notes for HomePod software 16.3.1, the update includes general performance and stability improvements. Notes for tvOS 16.3.1 are unavailable as of yet, but are probably similar to the HomePod...
Read Full Article • 138 comments