Reuters on Tuesday published a revealing insider report on the Steve Jobs-approved design and ongoing construction of Apple's new "spaceship" campus in Cupertino, California, which is expected to be finished this spring.

The write-up draws from interviews with nearly two dozen current and former workers involved in the $5 billion project, and focuses on the "fanatical" attention to detail demanded by Apple managers throughout the development which is said to have delayed the original 2016 completion date. 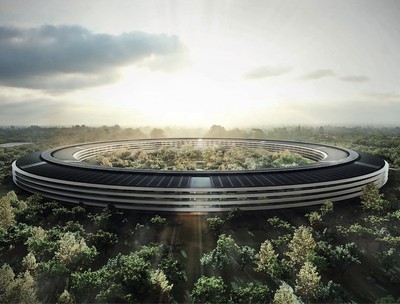 According to the report, Apple's in-house construction team enforced many strict rules. For instance, no vents or pipes could be reflected in the surrounding structures, despite the fact that the campus features the world's largest single pane of curved glass.

In another example of the stringent demands that construction workers were subject to, the guidelines for the special wood used throughout the building is said to have run to some 30 pages.

Tolerances, the distance materials may deviate from desired measurements, were a particular focus. On many projects, the standard is 1/8 of an inch at best; Apple often demanded far less, even for hidden surfaces.

The company's keen design sense enhanced the project, but its expectations sometimes clashed with construction realities, a former architect said.

"With phones, you can build to very, very minute tolerances," he said. "You would never design to that level of tolerance on a building. Your doors would jam."

According to architect German de la Torre, who worked on the project, many of the building's proportions were directly inspired by Apple products, from the curve of a rounded corner, to the elevator buttons, which struck some workers as resembling the iPhone's home button.

One of the most vexing features was the doorways, which Apple wanted to be perfectly flat, with no threshold. The construction team pushed back, but Apple held firm.

The rationale? If engineers had to adjust their gait while entering the building, they risked distraction from their work, according to a former construction manager.

"We spent months trying not to do that because that's time, money and stuff that's never been done before," the former construction manager said.

This obsession with minute features is said to have set back other parts of the project. For example, Apple wanted all the building's signage to reflect a sleek minimal aesthetic, but the emergency services' overriding concern was to ensure the property could be easily navigated if they were called to an incident. Discussions on the topic are said to have extended to 15 meetings with fire department representatives.

The article ends with an anecdote about the back and forth between construction workers and Apple managers over the design of a door handle for offices and meeting rooms. Discussions apparently went on for a year and a half – the door handle is reportedly still unfinished to this day.

You can read the full Reuters report here, and be sure to check out the recent drone footage of the Apple Campus 2 construction site we featured late last month.

EliasM
If only they had the same attention to detail for their own products. It's been months now that I cannot simply turn on Bluetooth on my iPhone without the need to redo it two or three times because it simply doesn't work the first time. There are many, many othere examples of obvious bugs that go unrepaired for far too long.
Score: 48 Votes (Like | Disagree)

And most people don't have that problem. Therefore you should probably get your phone repaired.
Score: 40 Votes (Like | Disagree)

If only they had the same attention to detail for their own products.

Of course the same person responsible for fixing bugs in iOS is also in charge of supervising construction of the new campus.
Score: 31 Votes (Like | Disagree)
Read All Comments

Saturday May 15, 2021 11:08 am PDT by Juli Clover
Twitter has been working on some kind of subscription service since last summer, and Jane Manchun Wong, who often digs into new features coming in apps, has shared details on just what Twitter is exploring. Twitter's subscription service could be called Twitter Blue, and at the current time, it's priced at $2.99 per month. There will be a "Collections" section that allows users to save and...
Read Full Article • 63 comments