Griffin today announced several new additions to its line of BreakSafe products, adding to the original BreakSafe magnetic USB-C cable that it introduced in January of 2016.

"Last year at CES 2016, our acclaimed BreakSafe Magnetic USB-C Power Cable stole the show with its innovation and Type-C support," said Rick Kennedy, Category Manager of Cables at Griffin. "We're proud to continue that legacy by extending the BreakSafe experience to more audiences beyond USB-C. Now, whether users are at their laptops or on the go, they get the safety that comes from a magnetic breakaway cable on any device."

Griffin's new 100-watt BreakSafe Hi-Power Breakaway cable, coming in the second quarter of 2017 for $39.99, is designed for use with the new MacBook Pro. Like the original BreakSafe cable, it's designed to safely disconnected when accidentally pulled away from the MacBook. 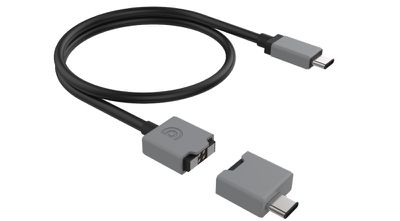 The BreakSafe Magnetic USB Breakaway Adapter ($19.99), which features standard USB power and data speeds of up to 480Mb/s, adds BreakSafe capabilities to any standard USB-A device and will be coming during the first quarter of 2017.

The BreakSafe Car Charger and the BreakSafe Wall Charger are both designed for USB devices like tablets and smartphones, with the ability to deliver up to 15 watts of power to accessories. Each accessory is priced at $39.99 and will be available in Q2 2017.

A popular Kickstarter project, the MagNeo, has been receiving a lot of attention lately and is similar to the new Griffin MacBook Pro Hi-Power cable but promises to offer more than just power. The MagNeo, priced at $35 for Kickstarter backers, promises to combine MagSafe-style connectivity with a USB-C Adapter that offers 100W charging, data, and video capabilities, but it remains to be seen if the product will be able to offer all of that functionality.

The MagNeo lists an estimated delivery date of January 2017, but potential backers should be aware that Kickstarter estimates are often off by months as new designers tend to underestimate the time required for manufacturing and ramping up from a testing phase to mass production.

dannys1
Having your data connected via a magnetic connection, I wonder what could go wrong...
Score: 16 Votes (Like | Disagree)

zorinlynx
Could they make it any bigger? Did they even TRY making it compact? Ideally the plug should be just a stub that barely sticks out past the side of the laptop.
Score: 13 Votes (Like | Disagree)

tazinlwfl
It'll take a few years for it to look nearly as elegant as MagSafe did, but it's a start.
Score: 10 Votes (Like | Disagree)

rjtyork
Why did they have to screw up MagSafe so bad?! First they move to a T cable instead of keeping the L cable and then they get rid of it altogether?! What would Steve say, Tim?! WHAT WOULD STEVE SAY?!?!
Score: 8 Votes (Like | Disagree)

Mac Fly (film)
What annoys me even more is the lack of orange/green status lights for charging in the new machines. That was a godsend. Apple should add a hidden (visible only when ON) status light somewhere on the new machines in the next design tweak to let users know when their closed-lid machine has reached 100%. Orange could mean 15 or 75 percent, yes, but green only always means 100%. There's a feeling of familiarity and confidence that comes with that, and it was totally reliable. And I never tripped over my MagSafe once and I've owned three MBA's. What I did love MagSafe for however was the ease of magnetic connection daily. I'd find it much easier to live without MagSafe than that status light. It's a step backward in design ease of use now. It's not just a change—it's worse.
Score: 8 Votes (Like | Disagree)
Read All Comments