The FS9100 sensors are capable of scanning a fingerprint through 1mm of full cover glass, allowing for button-free display designs that are still able to take advantage of fingerprint recognition functionality.

According to Synaptics, the sensors have been specifically designed for placement under cover glass, including 2.5D glass, located in the front, bottom bezel of smartphones and tablets. 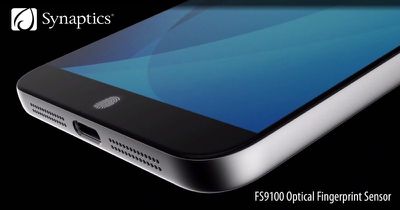 The FS9100 sensors eliminate the need for cutouts on the display of a device, and because they're under glass, they're scratchproof, waterproof, and respond well to wet fingers. Wet finger performance is something that causes most fingerprint sensors, including Apple's, to fail.

Synaptics says its sensors are also designed to be thin and consume a minimal amount of power, while also using AI to distinguish between fake and actual fingers.

Apple likely has its own proprietary solution in the works for the display of the 2017 iPhone 8 because it has been in development for some time and is said to have in-house engineers working on the product, but Synaptics is a known Apple supplier and provided Apple with LCD display drivers in 2015 following its acquisition of Renesas SP Drivers, a chip company Synaptics purchased in 2014.

If the rumors are true, Apple's iPhone 8 will include a Touch ID fingerprint sensor, a camera, and other components that are located behind the display of the device, entirely eliminating the existing home button and allowing for an iPhone that looks like a single piece of glass.

Other rumors for the iPhone 8 suggest it will include a glass body, an OLED display, a faster A11 processor, and wireless charging functionality.

Synaptics' optical fingerprint sensors are scheduled to begin sampling during the first quarter of 2017, with production to begin in the second quarter of the year.

OldSchoolMacGuy
Lots of assumptions being made that the iPhone 8 will include this. If rumors were true, the current iPhone would have wireless charging, a projector, 3D screen, virtual keyboard, and much more (all according to "reputable" reports from MacRumors and their sources).

Please remember that a rumor is just a rumor. It's silly to get bent out of shape after every Apple announcement when something that was never promised wasn't included in a new product. BUT THE LOTTERY GUYS MADE ME BELIEVE I'D WIN!!
Score: 12 Votes (Like | Disagree)

Arran
So how are you supposed to find the button by touch?

If it's all just flat glass.
Score: 6 Votes (Like | Disagree)

KALLT
I just do not see why people get that excited about bezel-less and buttonless phones. They are just not very ergonomic, in my opinion. I would like to have a phone with a bit more grip, without having to use a case. I still think that the 3G was the most comfortable phone to hold.
Score: 6 Votes (Like | Disagree)

samcraig
Like/dislike this idea. Call me old school - but I still like a physical button for some things - especially powering on and off.

Also - I wonder what this will do with repair/replacement costs given that the entire front panel would need to be replaced.
Score: 4 Votes (Like | Disagree)

nwcs
Nah, I don't want a buttonless phone - a true slab. There's nothing wrong with a couple of physical buttons. Hopefully this "zen" phase of minimalism Apple is imposing on the iPhone will abate and we can get back to usability in use instead of looking at it and not using it.
Score: 4 Votes (Like | Disagree)

Sedulous
Ugh, just because fingerprint sensor can be behind display glass does not mean the same thing as being behind the display. The only thing this offers is a sensor that can be "hidden" instead of one that is easily found. Useless.
Score: 3 Votes (Like | Disagree)
Read All Comments