While the new entry-level 13-inch MacBook Pro with function keys has a removable SSD, the same cannot be said for the Touch Bar model. 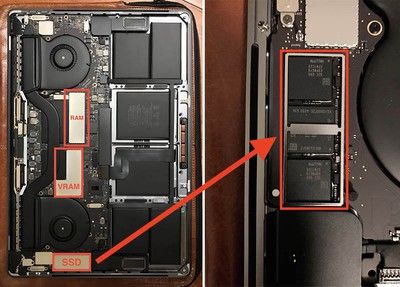 Given the SSD appears to be permanently soldered to the logic board, users will be unable to upgrade the Touch Bar MacBook Pro's flash storage beyond Apple's 512GB to 2TB built-to-order options on its website at the time of purchase. In other words, the amount of flash storage you choose will be permanent for the life of the notebook.

The discovery also increases the importance of backing up data using Time Machine or a similar solution in case of logic board failure.

These are the first MacBook Pro models to ship with non-removable SSDs, following in the footsteps of the 12-inch MacBook.

Official teardowns from the likes of iFixit and OWC should confirm and provide a better look at the non-removable SSDs.

Is your SSD full and do you want to upgrade? Tough luck: you can't upgrade with a bigger SSD.

Do you want expand the storage with expansion card? Tough luck because new MacBook Pro doesn't have SD slot either.

Did you have your data on the SSD when the logic board failed? Tough luck because you are not getting that data back.
Score: 110 Votes (Like | Disagree)

dannys1
It also has the fastest drive in any laptop in the world, but you know - lets rile the forum members a bit more :rolleyes:
Score: 58 Votes (Like | Disagree)

It also has the fastest drive in any laptop in the world, but you know - lets rile the forum members a bit more :rolleyes:

And what good is the "fastest drive" when it's full?
Score: 52 Votes (Like | Disagree)

That is disapointing. I wish I had known that before ordering mine.

No worries. Simply cancel your order if that upsets you. Will you do that?
Score: 43 Votes (Like | Disagree)

Well that's "awesome". And if that SSD dies few weeks after warranty expires?

Don't worry you can always pay $2499 for another device. Problem solved!
Score: 41 Votes (Like | Disagree)
Read All Comments

Sunday May 9, 2021 2:00 am PDT by Sami Fathi
Zoom, a hallmark platform used by millions during the global health crisis, has been given access to a special iPadOS API that allows the app to use the iPad camera while the app is in use in Split View multitasking mode. This case of special treatment was first brought to attention by app developer Jeremy Provost, who, in a blog post, explains that Zoom uses a special API that allows the...
Read Full Article • 359 comments

Monday May 10, 2021 10:41 am PDT by Juli Clover
Apple's upcoming iPhone 13 models will be slightly thicker than the iPhone 12 models and will also feature larger, thicker camera bumps with lenses that protrude less, according to iPhone 13 schematics seen by MacRumors. The new iPhone 13 and 13 Pro models are expected to feature a thickness of 7.57mm, up from 7.4mm in the iPhone 12 models. That's an increase of 0.17mm, which won't be hugely ...
Read Full Article • 196 comments