E-commerce site Etsy, which gives independent crafters a place to sell their wares, today announced that it has begun accepting Apple Pay through both its desktop and mobile websites.

Etsy previously accepted Apple Pay within the Etsy app for iOS devices, but with support for Apple Pay on the web, Apple users can pay with Apple Pay using Safari on any supported Mac or iOS device. Etsy is accepting Apple Pay payments in Australia, Canada, France, Hong Kong, Singapore, Switzerland, the United States, and the United Kingdom. 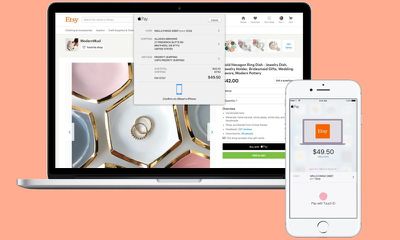 To use Apple Pay on the web while shopping on Etsy, buyers simply select Apple Pay at checkout and then authorize the payment using Touch ID following a prompt on their iOS device.

Apple Pay on the web was introduced with iOS 10 and macOS Sierra, giving Apple Pay users an alternative to payment services like PayPal. Since Apple Pay on the web went live, many websites and payment providers have implemented support for the feature, and it is on its way to being widely accepted.

Apple Pay on the web requires iOS 10 or macOS Sierra, along with an Apple Pay-compatible device. On Mac, a purchase needs to be confirmed with an iPhone 6, iPhone 6s, iPhone 6 Plus, iPhone 6s Plus, iPhone 7, iPhone 7 Plus, iPhone SE, or Apple Watch, while mobile web payments are available on the above listed iPhones and the following iPads: iPad Air 2, iPad mini 3, iPad mini 4, and all iPad Pro models.

If you want to play around with Apple Pay on the Web without spending money, you can test it here:
https://stripe.com/docs/apple-pay/web

I want the app that allows be to buy stuff without spending money.
Score: 1 Votes (Like | Disagree)

konqerror
If you want to play around with Apple Pay on the Web without spending money, you can test it here:
https://stripe.com/docs/apple-pay/web
Score: 1 Votes (Like | Disagree)
Read All Comments

Tuesday July 5, 2022 12:10 pm PDT by Juli Clover
Apple today released new firmware for the Siri Remote designed for the Apple TV, updating the software from version 9M6772 to 10M1103. The software is for the redesigned Siri Remote that was released in May 2021, aka the gray remote with the updated interface. In the Apple TV settings, the new firmware will display as 0x0070, up from 0x0061. There is no word on what's new with the Apple TV...
Read Full Article • 156 comments