Pandora today began the rollout of a "completely overhauled" desktop site for its streaming radio service, coming on the heels of its rebranded iOS and Android apps last month. Pandora.com now has a couple of new features including an enhanced user interface and new additions for Pandora Plus listeners, which should begin appearing throughout the day as the rollout continues.

The changes begin with the music player on Pandora's web platform, which is now a fixed bar at the bottom of the screen, ensuring that users will "never lose sight" of the currently playing track. Because of this shift, album artwork is at the center of the screen and provides prompts to artist information like tour dates, lyrics, bios, and more. The flat blue aesthetics of the site also now closely mirror that of the company's mobile app and its logo. 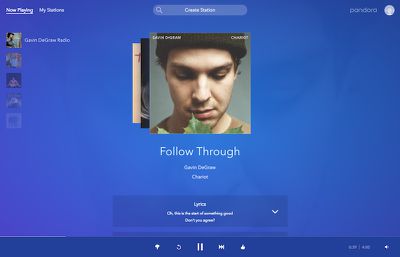 Pandora has also streamlined a few navigation features when users create and organize stations, look at their favorite tracks, and use playback controls. The company said that "the updated features across the platform allow you to easily control your listening experience."

Listeners on Pandora Plus can use the replay button to restart a song from the beginning, or even jump back in the current listening session and find an old track to replay. A skip option will also let them get to the next song quicker, as well. The ad-supported version of Pandora on the web supports these features too, but in a limited capacity. Whenever users on the free tier run out of skips or want to listen to a track again, the company said that they can "watch a video ad to get those extra features for added control" over the service.

Much like the app rebranding in October, the slight shift in Pandora's web platform today is setting up the launch of the company's impending on-demand music listening service, which CEO Tim Westergren has confirmed will arrive "later this year." The service -- which is believed to cost $9.99/month -- will enter the music streaming race as an Apple Music and Spotify rival, with features expected of such a competitor, including on-demand music listening, playlist creation, radio access, and more.

Pismo
None of it matters because the site still requires Flash.
Score: 12 Votes (Like | Disagree)

naeS1Sean
Why do you require Flash, Pandora! Why!!!
Score: 4 Votes (Like | Disagree)

None of it matters because the site still requires Flash.

Yup. The final nail in the coffin was when they set up their site to require Flash in order to manage our accounts—such as credit card number. Flash leaks like a sift, and it is a nuisance to try to keep track of its oft security updates. Installing it always feels like placing a welcoming mat with the keys to the house underneath it at the front door
Score: 3 Votes (Like | Disagree)

Floris
Still the same to me: You are not American, so get lost.. The music industry doesn't want you - we do, but they don't.

It's a splash page I've seen for years.

None of it matters because the site still requires Flash.

I'm listening to it now with Flash disabled in Chrome (most recent Windows version). It loads with Flash disabled and is currently playing without issue or a prompt to install Flash. I also run uMatrix to block all third party scripts. I only had to allow access to p-cdn.com to get it to work, but kept everything else blocked. I also have uBlock for ad blocking and that isn't causing issues either. Not sure if maybe it loads a different version of the player for me because I'm a paid subscriber?

I really hope that their upcoming on-demand option also works without Flash!

Website still hasn't been updated for me using Safari.

To see the update now, you need to go to settings then click "go to new site" in the bottom left.
Score: 1 Votes (Like | Disagree)
Read All Comments