While the iPad Pro lineup has increased Apple's tablet revenue based on higher price points, helping offset a lengthy slide in units sold, the latest data from market research firm IDC claims the iPad Air and iPad mini lines accounted for more than two-thirds of Apple's tablet shipments in the fourth fiscal quarter. 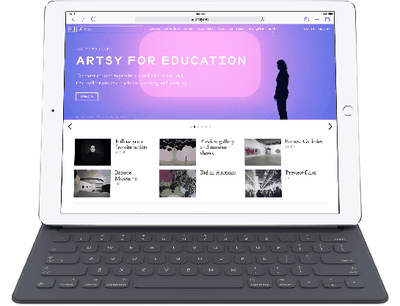 Apple officially reported 9.26 million iPads sold in the quarter, representing late June to late September, but it does not break down its tablet sales by individual model. IDC did not share its methodology behind calculating iPad Pro sales specifically, but vaguely notes that it uses proprietary tools and research processes.

Despite selling some 600,000 fewer iPads compared to the year-ago quarter, Apple's tablet revenue remained flat at just over $4.2 billion in the quarter. The reason: iPad Pros cost more. The higher ASP is important for Apple as the worldwide tablet market continued its slump last quarter.

IDC estimates tablet shipments dropped to an estimated 43 million units in the quarter, marking a 14.7% year-over-year decline. Apple led all vendors with 21.5% market share, up slightly from 19.6% in the year-ago quarter, while Samsung trailed in second with an estimated 6.5 million shipments and 15.1% market share.

Amazon and Chinese competitors Lenovo and Huawei rounded off the top five with an estimated 3.1 million, 2.7 million, and 2.4 million tablet shipments respectively in the quarter. Amazon saw explosive 319.9% growth due to its Amazon Prime Day sale in early July that led to a huge surge in shipments of its Fire tablets.

During its recent earnings call, Apple financial chief Luca Maestri said the company is "highly successful" in the tablet market, with 82% market share of premium tablets priced above $200. Meanwhile, IDC said other vendors are "racing to the bottom" with low-cost, sub-$200 traditional and detachable 2-in-1 tablets.

"The race to the bottom is something we have already experienced with slates and it may prove detrimental to the market in the long run as detachables could easily be seen as disposable devices rather than potential PC replacements," said Jitesh Ubrani, senior research analyst with IDC.

All those general users that have no need for the additional features and price of the Pro. Think about all the iPads sold to be used as cash registers. Not at all surprising that most of the iPad buyers didn't opt for the Pro.

gnipgnop
iPad Pro 12.9" + Apple Pencil is the best drawing/art stylus combo I've ever used, including desktop Wacom Cintiq. Zero lag regardless of how fast you move the stylus or what type of drawing media the app is simulating. Pixelmator never seems to slow down regardless of how many layers you have in high-resolution. Same for Procreate. It crushes any previous desktop powered software/stylus I've used. Really drives home the usefulness of customized hardware at every level of user interaction.
Score: 25 Votes (Like | Disagree)

paulryp
I would love one but they are STUPIDLY priced and so far away from a casual purchase at this point. Apple have lost the plot and their products are floundering now that the competition has caught up at a fraction of the price.
Score: 23 Votes (Like | Disagree)

I thought the iPad Pro was Apple's Super. Computer.
Score: 17 Votes (Like | Disagree)

Zimmy68
I love my iPad Pro but Apple completely abandoned it. They are so good at showing why you need it, then ignore.

If they were serious about a Pro Tablet, they should have written a Pro iOS to go with it.

When iOS 10 beta came out and there were almost zero iPad specific features, I feared the worst and it looks like I am right.

It blows my mind that something as powerful as the iPad Pro is still using the same stupid icon grid layout as the OG iPad 1.
Score: 14 Votes (Like | Disagree)
Read All Comments