The TV app is a "unified TV experience" works in sync across Apple TV and iOS devices, and provides an easy-to-use hub for accessing and discovering TV shows and movies in a way that "will change how we watch television", says Apple.

"Using apps on Apple TV, iPhone and iPad has become the primary way for so many of us to watch television," said Eddy Cue, Apple’s senior vice president of Internet Software and Services. "The TV app shows you what to watch next and easily discover TV shows and movies from many apps in a single place."

The app features category tabs across its main screen. "Watch Now" lists TV episodes and movies you are currently watching. It includes series you might be binging on, as well as new episodes of series you also follow.

With the "Up Next" sub-category, users can enjoy the shows and movies they are currently watching, including recent iTunes rentals and purchases — all presented in the order they're most likely to watch first.

For example, when viewers finish an episode, the next one automatically appears at the start of the Up Next queue, as well any new episodes as they become available.

With the Store category, users can look for something new across video services that they have not yet downloaded or are not yet subscribed to, along with the latest releases on iTunes.

Apple also introduced a new Siri feature for Apple TV that lets viewers tune in directly to live news and sporting events across their apps. Siri is now aware of live sporting events across apps so users can simply say things like, "Watch the Liverpool game" or "Which games are on right now?" Siri also knows additional details of the games, can provide live scores and can take viewers directly to the live stream within the app that’s carrying it, according to Apple.

The TV app will be a free software update in December for Apple TV (4th generation), iPhone and iPad customers in the US. Live tune-in with Siri is available today.

ipedro
What we've witnessed today was the birth of the video counterpart to Apple Music. This is far bigger than what people are giving it credit for. It's the beginning of the end of TV shows and movies in iTunes, paving the way to the end of iTunes itself. This may have been the most underestimated announcement of the event. It's going to have far reaching implications in the future as Apple begins to flesh it out.

- The TV app is not just on AppleTV. It's on iOS and will likely make its way to the Mac in the next update. That alone demonstrates its importance in Apple's roadmap. It fills the roles now occupied by iTunes and the Video app on iOS. 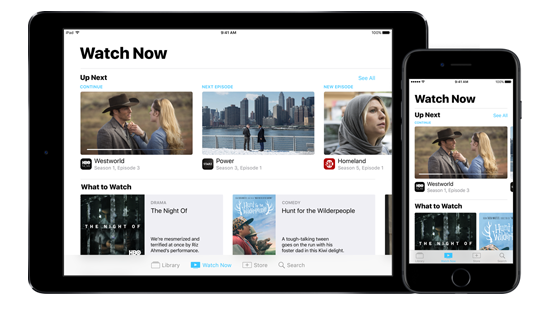 - There's already a Store. While right now it's a place to find other video content apps and to direct you to buy or rent on iTunes, it appears to set the ground for a place where you'll buy your TV shows and movies from Apple and other providers. 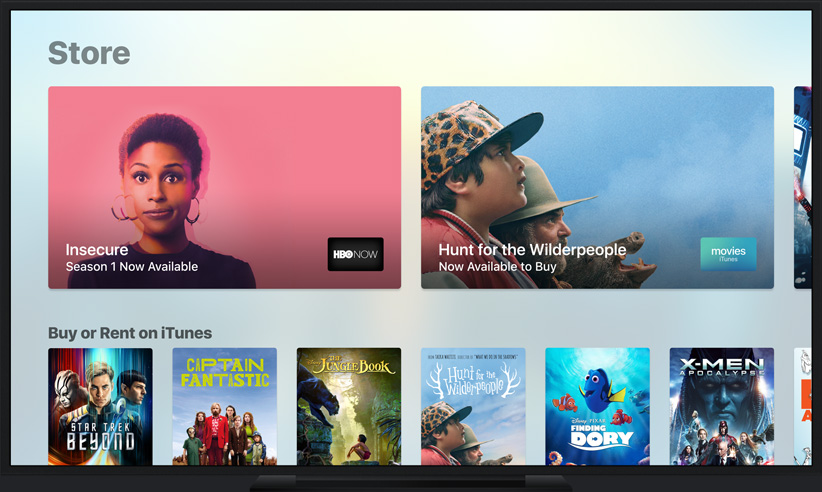 - The TV app also sets the groundwork for a TV subscription service. Pay one price like you do for Apple Music and watch anything by participating content providers. From a business standpoint, it can follow the Apple Music model where Apple pays the content owner a share of the profits on a per play basis. That's likely the reason why Netflix is not a part nor will Amazon. This is their future competition. An Apple TV subscription service will eat their lunch.


- iTunes will now have had all of its components delegated to appropriate apps. Apple Music to listen to and subscribe to music, The App Store for buying and managing apps, TV for watching and buying (or subscribing to) tv shows and movies, and iCloud for backing up devices. I will not be surprised to see iTunes gone in the next couple of cycles. First on iOS and tvOS, then inevitably on macOS as Apple Music comes to that platform in an independent app.

I believe that what we're seeing here will come to be recognized as a major announcement that at the time seemed to be just an app announcement.
Score: 8 Votes (Like | Disagree)

uva25a
I just don't get it. As someone who has owned a Roku, Apple TV and Amazon Fire TV, I don't understand why I would want to get this if I can't search for Netflix and Amazon Prime. Ok, if you are one of the few people who aren't prime members, fine. But considering Prime and Netflix are putting out so much good original programming, what does this Apple Tv feature do for me. Amazon is updating their interface to allow equal search and promotion capabilities for Netflix and Hulu so this seems to me like a much better option. Renting or buying movies on iTunes is useless to most as you can do this on other devices as well. I want to love this feature but without Prime and Netflix, its fairly lame compared to what Amazon Fire is offering, in my opinion.
Score: 8 Votes (Like | Disagree)

redscull
I want this app for macOS. It annoys me that my iMac, which has a big screen for a bedroom, is such a terrible media viewer unless I connect an Apple TV to it (is that even possible?). All because macOS thinks you should use iTunes to play your content, and iTunes is a complete piece of garbage.

I also tried using a Mac mini connected to a TV. But it's the same problem. macOS is a terrible htpc operating system. Playing content in it is cumbersome. Every proper mac computer should be able to do, in full, everything an Apple TV is capable of.
Score: 5 Votes (Like | Disagree)

MacManTexas56
yawn...why do they even bother? lol
Score: 5 Votes (Like | Disagree)

4K streaming on a Device that doesn't support 4K? I know people here are gung-ho about 4K, but the majority of the market doesn't care about 4K. Or can even tell the difference 1080p and 4K.

4K will not take off until networks start broadcasting in 4K.
Score: 5 Votes (Like | Disagree)

profets
US only... Thanks.
Score: 4 Votes (Like | Disagree)
Read All Comments

Saturday May 21, 2022 9:00 am PDT by Hartley Charlton
With around four months to go before Apple is expected to unveil the iPhone 14 lineup, the overwhelming majority of rumors related to the new devices so far have focused on the iPhone 14 Pro, rather than the standard iPhone 14 – leading to questions about how different the iPhone 14 will actually be from its predecessor, the iPhone 13. The iPhone 14 Pro and iPhone 14 Pro Max are expected...
Read Full Article • 253 comments