Following their addition to Apple.com in the United States last month, Sonos speakers can now be purchased from Apple's website in several other countries. 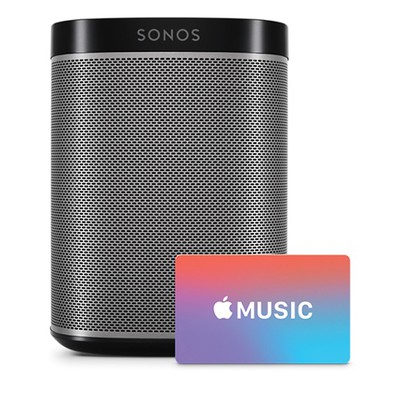 Apple is currently offering a free 3-month Apple Music gift card with the purchase of either speaker. The promotion is valid in the United States and all of the other aforementioned countries and runs until December 31.

Why does Sonos seem like a top player? What are they doing that makes their product worth buying?

I always hear people rave about them but it just seems like any other BT speaker...

jdag
Ah, another Sonos thread. Which can only mean a division of those that OWN Sonos vs. those that constantly put down Sonos...

Those that don't own Sonos:
Sonos is overpriced
It doesn't even support bluetooth
Airplay is better and I don't have to buy anything more
Sonos forces you to use their app
etc.

Those that own Sonos:
It is my favorite technology I've purchased in years
It works, and works incredibly well
I have speakers all over my house, and use them every day, flawlessly
I can't wait to buy more speakers
etc.

So decide for yourself. The people that own Sonos equipment overwhelmingly love it. Don't just like it, love it. It's pretty logical that those that own and extoll the positives actually have more basis for their opinions.
Score: 9 Votes (Like | Disagree)

Nothing needs Siri integration! Siri cant even send a text message to my wife, even when I follow Apple's guidelines to the letter. Bloody thing keeps trying to send an email.

Perhaps we will see an acquisition by Apple....

With the demands people put on their wi-fi, the Airport Express doesn't seem to get any traction as a hub. Maybe as an extender??? Don't really know.

Printers these days have built in wi-fi, so that's no longer a strong selling point for the Airport Express.

That leaves Airplay, for which I currently have four Airport Expresses to send music into different areas of my house. Airport Expresses aren't as reliable as I'd like with Airplay (and I'm using the newest Airport Extreme as my hub).

Anyway, I guess my point is that Airplay seems to be the last reason these days to buy an Airport Express, and now that Apple is selling Sonos - a competitor in the Airport Express/Airplay/stereo market - it tells me Apple is giving up on building the hardware for sending music around your home.

I miss that one hot minute where Apple was dipping its foot in the home stereo market with the iPod Hi-Fi. No, it wasn't the best speaker. But they were taking risks. And they were cool risks.
Score: 4 Votes (Like | Disagree)
Read All Comments