StubHub is coming to Apple TV, marking what it says is the first ticketing app on the tvOS App Store. The app has been specifically designed for the fourth-generation Apple TV, enabling users to browse, search, and purchase tickets for sports games, concerts, theater and comedy shows, and other U.S. events from the couch. 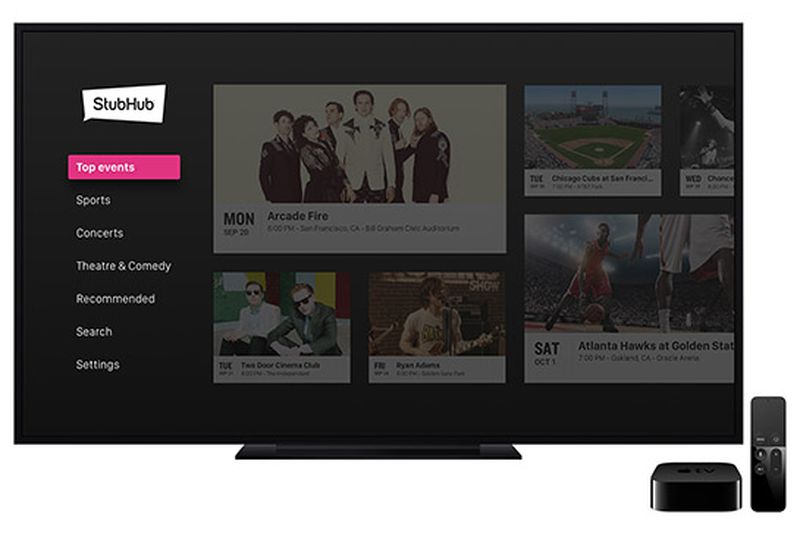 StubHub, owned by eBay, is a popular online marketplace for buying and selling tickets for events, including NFL, MLB, NBA, and NHL games, concerts by artists such as Adele and Drake, WWE and UFC fights, comedy shows by the likes of Amy Schumer, and more. Tickets can be searched for by genre, artist, team, or venue. 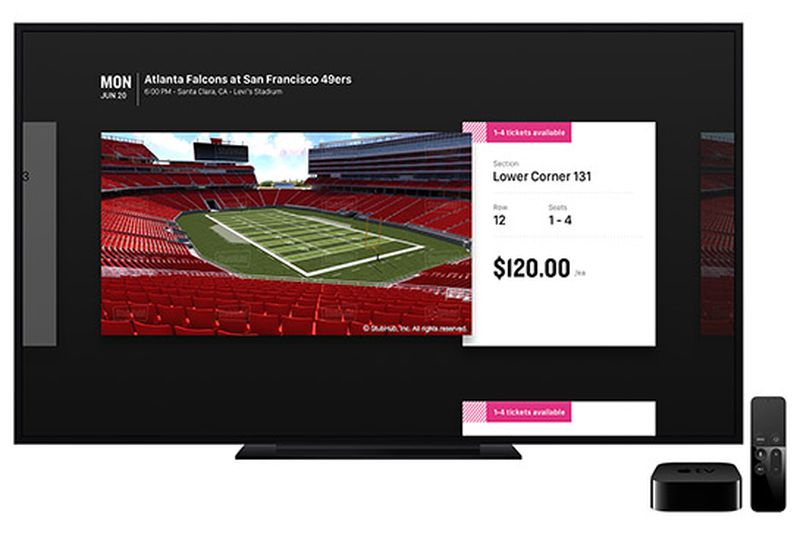 StubHub for Apple TV takes advantage of the big screen with a highly visual design intended to motivate couch sitters to get out:

The design was tested and iterated through several rounds of user feedback, in which StubHub designers added the side-scroll interface for browsing within a seating section of a specific event, and included high-resolution seat maps on the listing cards so consumers could get a clear idea of the view from the section in which they were considering tickets.

StubHub for Apple TV does not appear to be available on the tvOS App Store just yet, but it should be rolling out soon.

Kabeyun
Seems like a natural fit. Watch an artist, comedian, or sports team, and be inspired to then go buy tickets for their next event. This could do well.
Rating: 2 Votes

You are right, sorry. 95% of the time change the tv input to ATV and then fool with the horrible remote and "keyboard".

My point was, this app is completely superfluous and using your iPhone, iPad or laptop is probably 90% quicker.

I get your point.

Here's another one. By the end of the year about one in four ('http://fortune.com/2016/04/05/household-cable-cord-cutters/') households will have cut out cable TV. So that'd be 75% of the time, and that's assuming 100% of these remaining subscribers weren't watching something on an ATV when they chose to use StubHub.

And here's a third. You can speak text entry with the new remote, including spelling ('https://support.apple.com/en-us/HT200107#dictation') character strings. If the StubHub app lets you save account info, buying tickets might not be such a pain after all.

And when you reply, maybe don't be snide. It'd be so refreshing.
Rating: 1 Votes

robjulo
That's a reach. See artist on tv and then, 1) change tv input to ATV; 2) pull up Stub Hub app; 3) attempt to navigate using the horrible remote and no keyboard to buy tickets.

How about I just pick up my phone or iPad and buy the tickets in about 10% of the time.

Seems like a natural fit. Watch an artist, comedian, or sports team, and be inspired to then go buy tickets for their next event. This could do well.