Apple Maps has been updated with comprehensive transit data for the U.S. cities of Columbus, Ohio and Pittsburgh, Pennsylvania, enabling iPhone users in the areas to navigate using public transportation, including buses or light rail. 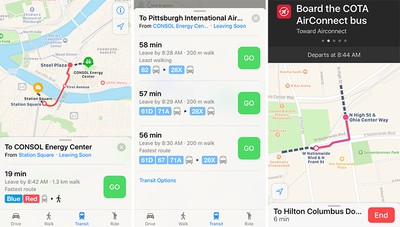 Apple introduced Transit in Maps as part of iOS 9 in select cities around the world, including Baltimore, Berlin, Boston, Chicago, London, Los Angeles, Mexico City, New York, Philadelphia, San Francisco, Sydney, Toronto, and over 300 cities in China. The feature has its own tab in Apple Maps on iOS 10 when entering directions.

The feature has since expanded to a number of regions around the world, including Atlanta, Dallas-Fort Worth, Denver, Honolulu, Kansas City, Miami, Montréal, Portland, Prague, Rio de Janeiro, Sacramento, San Antonio, San Diego, Seattle, parts of New South Wales in Australia, and parts of British Columbia in Canada.

I know competition is good and all, but I kind of wish Apple would give it up already and allow users to select Google Maps as the default map program.

Are you kidding? Apple will be launching its new base map in 2017 and already iPhone users are using it 5 BILLION times a week even though they can easily use Google or other map apps.
Score: 4 Votes (Like | Disagree)

Fzang
Meanwhile, millions and millions of overworked, stressed and tired commuters have to make do with following the analog signs pointing to exit C, and manually figuring out whether their city has a tram or a light rail.
Score: 2 Votes (Like | Disagree)

I know competition is good and all, but I kind of wish Apple would give it up already and allow users to select Google Maps as the default map program.

You already mention it, but choice is good.

More importantly, Google does things I don't want to be involved with if possible. At the time of the change from Google maps to Apple Maps:

- Apple wanted turn-by-turn and vector map tiles, Google was holding these back as advantages for the Android platform.
- In return for providing the features Apple (and iOS users) asked for, Google wanted more control over the Maps app, more branding, and more identifiable location data. Apple wouldn't budge.

I'm glad Apple went down this path - privacy is important. It would've been easy to give Google access to iOS user data in return for the features.

It might not have worked out the way they wanted to, but we now have a great Google maps app (with vector map tiles and turn-by-turn). And For those that want it privacy via Apple Maps (and in certain countries like mine - zeros issues maps wise. However points of interest, while improving, are still lacking).

On the point of setting default apps - that's a whole different argument, and a decision that probably won't be changing soon.
Score: 1 Votes (Like | Disagree)
Read All Comments