AT&T has introduced new Mobile Share Advantage plans that eliminate data overage charges. Instead, after customers use all of their high-speed data amounts, all data usage will be reduced to a maximum of 128 kbps for the rest of their bill cycle, akin to what T-Mobile has offered for several years.

40GB, 50GB, 60GB, 80GB, and 100GB data tiers are also available, while business customers can choose plans with between 25GB and 200GB of data shared across up to 25 lines. The new plans continue to include unlimited U.S. talk and text, rollover data, sharable data, and Mobile Hotspot tethering.

AT&T charges an additional $20 access charge per smartphone per month for each plan. The carrier previously charged $25 per month for 5GB or lower plans and $15 per month for 15GB and above plans. Overage charges, meanwhile, were previously $15/GB or $20 per 300MB for customers on the now-eliminated 300MB plan.

AT&T boasts that many of its new plans include more data at a lower cost per megabyte than some plans it offers today.

If you have 2 smartphone lines on a current Mobile Share Value 5GB plan for $100 per month, you can now get the new Mobile Share Advantage 6GB plan – 1 additional GB of data for the same price, plus no overages. If you need more data, for $20 more a month, you can get 10GB of data.

The new Mobile Share Advantage plans are available August 21. Existing AT&T customers will not be automatically migrated to the new plans, so those interested in switching should inquire with the carrier next week.

oneMadRssn
This actually ends up being more expensive in many common scenarios, because the device access fee is now higher. This easily wipes away any savings.

EDIT: Here is a nice chart comparing old vs new vs number of lines:

penajmz
Am I the only one that thinks 1GB for $30 is ridiculous?
Score: 36 Votes (Like | Disagree)

This actually ends up being more expensive in many common scenarios, because the device access fee is now higher. This easily wipes away any savings.

The funny thing is that they didn't really drop data costs, except for the plans above 15 GB. 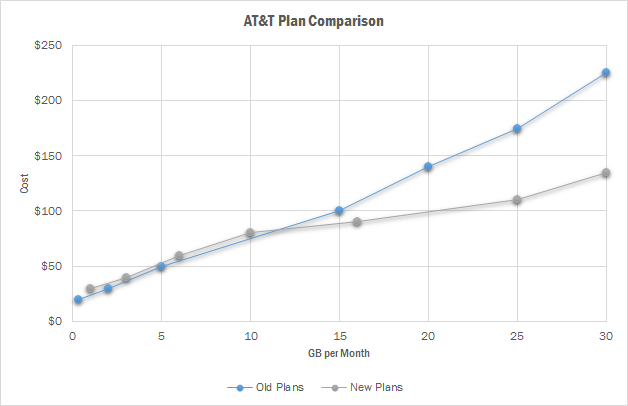 I'm sure some people who don't use much data will get hosed by this, but as someone on the 15GB family share plan, this works our wonderfully for me. I'll get 1GB more for $10 less. AND no risk of overage if I approach my data cap? I'm thrilled.