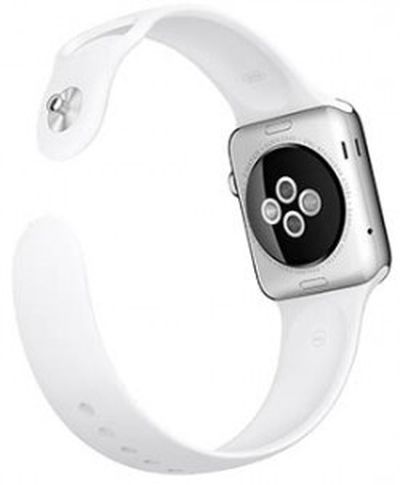 In an interview with Fast Company, former Apple employee Bob Messerschmidt, who helped design the heart rate sensors in the Apple Watch, gave some insight into what it was like working with Jony Ive and Apple's Industrial Design Group on the company's first wearable device.

After a 2010 acquisition, Messerschmidt joined the Apple Watch team, where he was in charge of designing some of the sensors for the device. In an anecdote relayed to Fast Company, during one meeting, Messerschmidt proposed putting health sensors in the Apple Watch band, an idea that was quickly shot down by the Industrial Design Group because of a desire for interchangeable bands.

One great example is [when] I went to a meeting and said I'm going to put sensors in the watch but I'm going to put them down here (he points to the underside of the Apple Watch band he's wearing) because I can get a more accurate reading on the bottom of the wrist than I can get on the top of the wrist. They (the Industrial Design group) said very quickly that "that's not the design trend; that's not the fashion trend. We want to have interchangeable bands so we don't want to have any sensors in the band."

Messerschmidt's next proposal was for sensors at the top of an Apple Watch worn tightly against the wrist, which was also nixed because "that's not how people wear watches." According to Messerschmidt, it was difficult working within the design constraints at Apple, but it pushed him to figure out "new engineering solutions" and ultimately made for a product with a superior user experience.

Engineers left in a vacuum might say "well, that's maybe not so important; we can get a better signal by doing it the other way so let's do it that way." So, left to their own devices, that would be the way the product would end up. So you have to have a really strong voice supporting the user. I think the idea of focusing on that is uniquely Apple

Messerschmidt goes on to explain other important lessons he learned from his time working at Apple and from Steve Jobs, including that user experience is "everything when it comes to consumer products," that "good enough is not good enough," and that it's important to say no "until it's just right."

Following three years at Apple and integral work on the heart rate sensor in the Apple Watch, Messerschmidt left the company to found Cor, a startup producing a device that draws blood, analyzes it, and provides near-instant health-related information.

Messerschmidt's full interview is worth checking out and can be read over at Fast Company.

Thank God "fashionable" watchbands made the top of their priority list when designing the Apple Watch.
Score: 45 Votes (Like | Disagree)

Now, if only they had a pair of ears to actually listen to the user.
Score: 45 Votes (Like | Disagree)

DaveTheRave
Charging a watch every night isn't how most people use watches either, Jonny.
Score: 26 Votes (Like | Disagree)

NT1440
I'm confident Apple decided to go with an emphasis on fashion to grab the "trend setters" to normalize wearables as the first rollout phase for what the Watch is going to become. Without fashion, it's incredibly hard to get normal consumers on board with the idea. Now that it's getting out there, the tech aspect can really kick in.

Smart watches had the stigma of calculator watches a few years ago (and given some of the horrible designs I can see why).
Score: 23 Votes (Like | Disagree)

keysofanxiety
Interesting to read about this. The Apple Watch doesn't irk me so much any more.

When it was first introduced, I was a little surprised why they were so smug about promoting an interface similar to a '90s projector; namely, twist a wheel to zoom in. It seemed like such a close-minded and unimaginative way of getting around the limitations of the small screen. I guess a few of us were expecting an interface and aesthetic massively different to the Galaxy Gear and other wearables at the time.

In retrospect, I'm not sure what else I was expecting. And there are a lot of people here really really like it. Apple seem to have concentrated on improving the operating system and adding more functionality as well.

Deuce on the Clock
So we want to get into health and fitness but lets go for fashion over function. Okay makes sense to me. You're wearing it wrong people. Apple says one thing publicly then they contradict themselves.
I understand the cost factor with bands but don't say you're concerned about health and fitness tracking then half ass it because of fashion.
Score: 16 Votes (Like | Disagree)
Read All Comments