Mozilla announced the release of Firefox 48 for desktop yesterday, introducing a long-awaited multi-process feature to the browser along with a handful of interface tweaks.

Firefox 48 is the first version of the browser to include Electrolysis (or e10s), a multi-process feature Mozilla developers have been working on for over seven years. 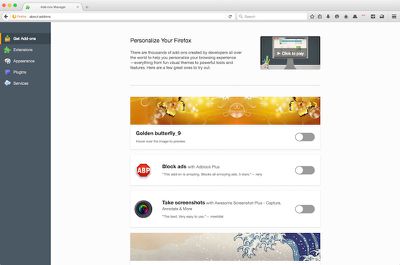 Multi-process Firefox separates web content and UI processes, so that when a web page is consuming a large amount of processing power, other open tabs, buttons, and menus don't become unresponsive. Mozilla says it will be activating the feature behind the scenes in a staggered rollout for Firefox 48 users over the next few weeks.

While Safari and Chrome browsers have offered a similar feature for some time, this version of Firefox is also running Mozilla's Rust language, which is designed to offer performance comparable to C++, but without the latter's susceptibility to security flaws. Firefox 48 also blocks Adobe Flash Player by default, as the big online media companies like YouTube increasingly switch to HTML5.

Elsewhere, Mozilla has improved the Awesome Bar, which now offers more relevant search suggestions, while the Discovery Pane has been redesigned to make it easier to read. In addition, Reading Lists have been merged into Bookmarks and Synced tabs have been relocated to the History Panel.

Firefox 48 is a free download for the Mac, though users of older Mac system should be aware that it drops support for OS X versions older than 10.9 Mavericks. [Direct link]

Yuck, Chrome is even worse.

Michaelgtrusa
Such a great browser.
Score: 4 Votes (Like | Disagree)

15 years worth of muscle memory and customizations. Plus I don't trust Google with my privacy and can't use Safari's URL bar.

Speaking of which, anyone know a way to get Safari to fill URLs instead of page titles when auto-completing in El Cap?
Score: 3 Votes (Like | Disagree)
Read All Comments