Logitech today announced that it is expanding its CREATE Keyboard Case with Smart Connector to the 9.7-inch iPad Pro, making the keyboard available for both of Apple's iPad Pro models. 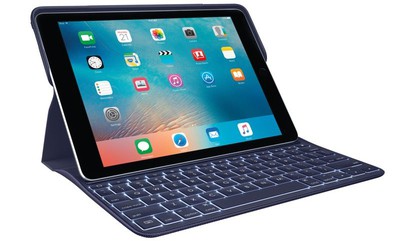 The CREATE Keyboard Case for the 9.7-inch iPad Pro features backlit keys, a protective case that protects the iPad when it isn't in use, iPad-specific function keys, and an integrated holder for the Apple Pencil. It is available in black and blue.

"CREATE is like the Swiss Army Knife of keyboard cases," said Michele Hermann, vice president of tablet accessories at Logitech. "It puts all the tools you need at your fingertips, and the keyboard charges through the Smart Connector so you can just set your iPad Pro into a typing position and go. It brings typing on the iPad Pro to a whole new level."

When the 12.9-inch iPad Pro launched, Logitech was the sole company to introduce a keyboard case that's able to use the Smart Connector on the tablet, and it continues to be the only company that offers a third-party Smart Connector keyboard solution.

We went hands-on with the CREATE case for the 12.9-inch iPad Pro when it was released. We loved the backlit keys and the general key feel, but felt like it added too much bulk to Apple's thin and light ultra powerful tablet.

The CREATE keyboard case for the 9.7-inch iPad Pro can be purchased starting today from the Logitech website, the online Apple Store, and Apple retail stores. It is priced at $129.99.

It's an ipad. With a lug about keyboard. Ipad concept is... you don't have a keyboard. That's the point. Do you see? Next!

Amazing concept huh, adapts to your needs at the time. Do you see?
Score: 7 Votes (Like | Disagree)

Relentless Power
Logitech stepping up their game, with a lighted keyboard! Will be purchasing. They continue to get better all the time.
Score: 4 Votes (Like | Disagree)

MrGimper
Lacks the flexibility of the ASK:

- Have to have a back case
- Have to have THEIR back case
- Can't rip the keyboard off when not needed and still have back protection from a case.
- Look like it would be a mare to fold back and use the tablet as a tablet.

But I'm sure others will love it and it fits their needs.
Score: 2 Votes (Like | Disagree)

yegon
Wouldn't want to type a dissertation on the SK but I'm actually quite impressed by it for light/medium usage balanced against it's relative little heft.

I just wish the Apple Smart Keyboard had shortcut keys, specifically play/pause. Yes yes, bringing up CC from the bottom or on the home screen from sleep is hardly an ordeal, but a single tap of a key is much more efficient. It's the lack of shortcut keys that compelled me to research alternatives like the Create, but I've not been too impressed with these alternatives. Too few use the Smart Connector, had hoped this would have improved nearly a year on.
Score: 2 Votes (Like | Disagree)

Arran
I bought the 12.9 inch version. Too bulky and heavy to go in my backpack along with my work laptop (Windows :() for a week-long trip. Awkward to remove too - so no mitigating factors. The smaller 9.7" version might fare better?

Returned it and just paid the "Apple tax" for Apple's smart keyboard and silicone back cover. Turns out they're worth the money. Pretty well-thought-out designs.
Score: 1 Votes (Like | Disagree)
Read All Comments

Saturday July 11, 2020 1:42 pm PDT by Arnold Kim
Casual MacRumors visitors may not realize that we have a very active PowerPC forum where users discuss issues related to PowerPC Macs that have not been produced since 2006. Threads range from hardware upgrades and software options to nostalgia: Photo by AphoticD Apple's recently announced transition to Apple Silicon (Arm) based Macs raised some interesting questions about future support...
Read Full Article • 113 comments