Parking service company Parkopedia today announced that it will begin to provide its enhanced and detailed parking information services directly within Apple Maps. With the partnership between the two companies, that means iOS users will be able to visit Apple Maps to discover more than 40 million parking spots in 75 countries across North America, Europe, Asia and Latin America.

The integration of Parkopedia into Apple Maps actually began in March inside of the United States, but today marks the official worldwide launch of the new resource. With the parking company's "rich information," Apple Maps users will be able to search for parking garages and lots, while reading about their location, payment type, number of spaces, and more. Future updates will allow users to filter search results, in order to discover the cheapest lots first, for example. 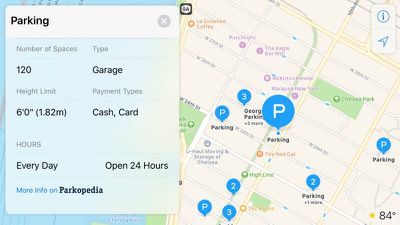 While reading through some Parkopedia information for a parking lot in Apple Maps, users will be able to follow a link to reserve a spot, although that process takes them out of Maps to complete the payment process on the Parkopedia website or within the company's iOS app [Direct Link]. "More detailed information" will also be available outside of Apple Maps and in Parkopedia itself, including pricing, user reviews, special offers and real-time space availability.

"We're excited to deliver detailed information on more than 40 million parking spaces in 75 countries to Apple Maps customers. This is a very important milestone for Parkopedia. Our combined footprint in the consumer and automotive space is huge and this opens the doors to delivering a world of innovative solutions," stated Parkopedia's Head of Marketing, Christina Onesirosan Martinez.

Apple Maps has been receiving steady updates to help bolster its navigation and research abilities for users visiting new cities, or simply trying to find new venues in their hometown. Among these changes coming in iOS 10 are new parked car notifications, which reminds users where they left their car -- especially when parking in large garages or lots -- with the help of a simple geo-locked icon within Apple Maps. Combined with Parkopedia's information catalog, this could help Apple get a leg up on its rivals in the GPS map app space.

The only advantage that Google maps has, from a UI standpoint, is I like how the little blip on a map also shows the direction the phone is pointed in, presumably using the compass. 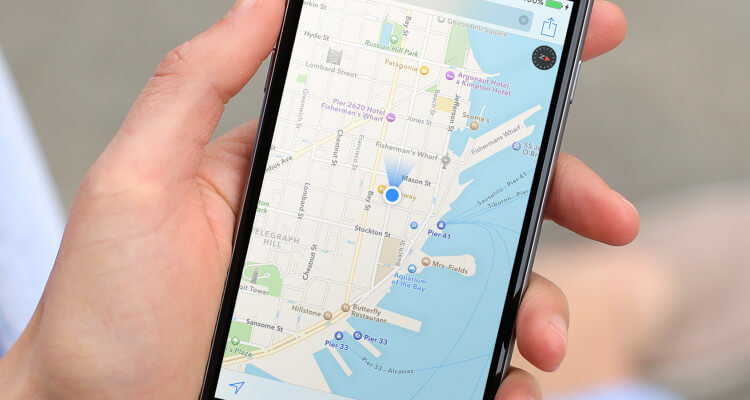 LordQ
Any improvement to Apple Maps is appreciated :)
Score: 9 Votes (Like | Disagree)

I actually think Google Maps has gotten worse and worse lately. It's way too bloated. The app used to launch instantly, now it shows a blank screen too long at first load. The slide-out menu from the left is very unintuitive. Google seems to be more interested in showing me ads than what I am actually looking for.

The only advantage that Google maps has, from a UI standpoint, is I like how the little blip on a map also shows the direction the phone is pointed in, presumably using the compass. Once Apple implements the same thing, I see no reason to keep the Google maps app.
Score: 9 Votes (Like | Disagree)

I actually think Google Maps has gotten worse and worse lately. It's way too bloated. The app used to launch instantly, now it shows a blank screen too long at first load. The slide-out menu from the left is very unintuitive. Google seems to be more interested in showing me ads than what I am actually looking for.

The only advantage that Google maps has, from a UI standpoint, is I like how the little blip on a map also shows the direction the phone is pointed in, presumably using the compass. Once Apple implements the same thing, I see no reason to keep the Google maps app.

I find Apple Maps more attractive and easier to use than Google Maps, but GMaps has certain advantages that are undeniable, for example:
- search along the route (eg, for gas stations, food, or lodgings, while in nav mode, and ON the already programmed route)
- display of useful information for some searches (eg price at gas stations, price for lodgings). These may not be perfectly accurate, but they allow you to rapidly scan eg the expensive hotels from the cheaper ones
- pretty much everything related to search (including "unusual" searches like "where do locals eat")
- much more willingness to utilize crowd-sourcing for all sorts of purposes including things like allowing users to easily and rapidly rate establishments and determine favorites. Apple's obsession with privacy is (IMHO) preventing them from handling a number of use cases that they could, at worst, just allow people to opt into.

- Google has a mechanism (lousy and painful, but at least it is there) for establishing way points along the way (eg I want to get from city A to city B but I want to go through National Park C along the way).

It's worth seeing what Google Maps can do today in the hands of someone who is used to the app and uses it aggressively. Apple still has a lot of features to add.

(And, for BOTH of them, it's still really early days. They both, for example, can't tell you where public toilets might be, or where one can mail letters. They both have lousy walking directions. They both have no mechanism for "suspending" a current search or route to open a second page to do something else. They both have lousy and limited abilities to share routes or anything else, let alone plan a joint route together over the internet. They both have no mechanism for anyone to provide a list of "attractions to see along I15 between Las Vegas and LA" sort of feature. etc etc.)
[doublepost=1469647295][/doublepost]Oh forgot to add that Google, right now, handles lack of coverage much better than Apple. They both suck when coverage is not available (they both seem to hold onto basic nav info even with no coverage, but god help you if you try to edit that route while there is no coverage), but at least Google has the ability for you to manually force the download of some material in an area where you think there will be limited coverage.

And of course Google has lane indicators (which of multiple highway lanes to move into for an upcoming turn).

Many of these things I've listed don't seem to matter when you are driving day to day along the same route, but they matter a LOT when you are driving in unfamiliar territory. Apple could solve some of them today, even without requiring huge data collection efforts. For example Apple could be a lot more aggressive in caching data and offering up (perhaps sub-optimal, and with no traffic info) routes even when there is no coverage. And hell, Apple could be using crowd-sourcing and/or telco's maps to WARN you about areas of upcoming no coverage (and preloading data just in case).
Score: 5 Votes (Like | Disagree)
Read All Comments

Monday November 28, 2022 10:42 am PST by Juli Clover
Apple has cut back on its Twitter advertising, according to Twitter CEO Elon Musk. In a tweet, Musk said that Apple has "mostly stopped" its Twitter ads, asking if Apple hates "free speech." Musk went on to publish a poll asking if Apple should "publish all censorship actions" taken that impact customers and he began retweeting content from companies that Apple has had moderation discussions ...
Read Full Article • 1397 comments