The app can now intelligently categorize users' notes by topic, such as food, books, and travel, and entries can be searched by keyword using topic shortcuts which appear in the search bar. 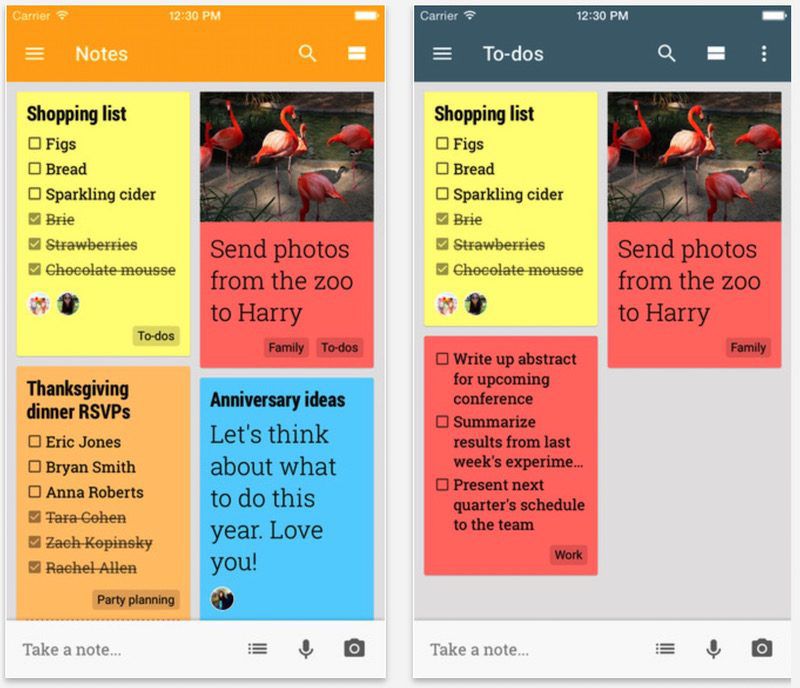 
The feature update for the note-taking service comes just a day after Evernote hiked its paid plan prices and announced it would be imposing a two-device limit on its free plan account holders.

Some MacRumors forum members have since been discussing moving over to the native iOS Notes app. To migrate Evernote notes to Apple Notes, follow these simple steps:

iOS 9.3 added support for importing Evernote XML data into Notes, so alternatively you could save the exported file you created in step 3 to your iCloud drive. Then simply locate the file on your iOS device and long-press it to import the note data.

Google Keep is a free download for iPad and iPhone available on the App Store. [Direct Link]

Wow this is great! Ever since Evernote announced that they don't want me to keep using their software, I have been looking for a tool which puts my most sensitive and personal data directly into the hands of Google so that they can deliver better advertisements to me. Thanks Google!


Why is this such an issue? It's a "free" service that Google provides in exchange for access to info that will help them better target advertisements to you. Is that really different than cookies on a computer? But the best part about it is that if you don't feel comfortable providing Google this level of access to your information, then you don't have to use the service. There is a price for everything, Evernote is monetary, Apple is functionality (compared to competitor options), and Google's is privacy. Which price do you want to pay?
Rating: 5 Votes

bommai
Except Google gets to "keep" your notes
Rating: 5 Votes

philosoraptor1
Has Google cancelled this product yet?
Rating: 4 Votes

These are the same people that used Google search for years as it was 'free’. They didn’t have the foresight, (in fact they did - they just ignored it), to stop using the services then as it suited them and helped them get work done. Much easier to do a google search than some proper hard reading after all.


Many also blithely ignore the fact that Apple itself uses our location, iTunes data and purchases for targeting iAds.

And that Apple sells Google access to Apple user's searches as a default, in return for getting billions of dollars a year in targeted ad kickbacks. Talk about "people being the product!"

Exactly!! I think it's great that Google has found this great new way to show me targeted advertisements.


It's a desirable service provided in return for seeing ads... just like how this forum is supported. People don't have to use such services, but virtually everyone does.

As far as Google goes, anyone can go to their Google "Ad Settings" in their Google control panel, and turn off targeted ads, delete and review other info: https://privacy.google.com/take-control.html

Has Google cancelled this product yet?


That worry can be a valid reason to avoid getting used to using a non-primary Google tool. Although when they've previously shelved products, they've given ways to transfer our data, so it's not the end of the world.
Rating: 3 Votes

thisisnotmyname
The migration steps from Evernote to Apple Notes deserve their own post.
Rating: 3 Votes

deeddawg
Not entirely sure why the Evernote to Apple notes instructions are mashed up with a notice about Google Keep, but good on MR for the Escape_from_Evernote instructions. I too was pondering my exit plan.
Rating: 2 Votes

coolfactor
If only Google wasn't creating this solely to mine one's personal information... there is no other reason.
Rating: 1 Votes

For those who need what it offers, yes. For people like me who just jot a few things down on occasion, the built-in notes app is perfectly fine.

Why would they? Keep is amazing! Kicks Notes butt by a landslide.

Google Reader was the best RSS reader by far in its day. That didn't save it.
Rating: 1 Votes
[ Read All Comments ]