iPhone 7 Case: Nearly Identical Fit to 6s, Except for Camera Cutout and No Headphone Jack

With only three months to go until the launch of the iPhone 7 and the iPhone 7 Plus, case makers have already started creating cases for the two devices based on rumored specifications. We were able to get our hands on a set of iPhone 7 cases, so we did a comparison video to see how it measures up to the iPhone 6.

Early iPhone cases are always built on specifications gleaned from rumors, supply chain information, and other third-party sources, and oftentimes, they're an accurate representation of what we can expect a next-generation iPhone to look like.

Cases aren't always spot on because they're only as precise as the information they've been built on, but these iPhone 7 cases match with almost all of the rumors we've heard about the iPhone 7 so far.

The iPhone 7 case does not fit the iPhone 6s camera, with a lower, wider, and tapered camera cutout. Schematics of the iPhone 7 have depicted a larger camera, presumably to accommodate an improved sensor, so we will see some design changes in the camera area. Rumors have widely focused on the dual-camera in the iPhone 7 Plus, but we expect the iPhone 7 will also be getting some significant camera improvements. 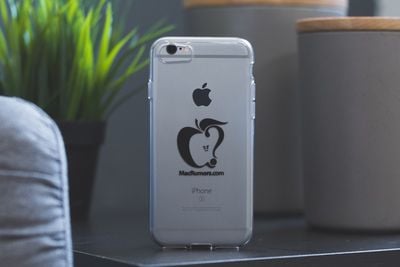 At the bottom of the case, there are cutouts for two speakers and no cutout for the headphone jack. Apple will be removing the headphone jack in the iPhone 7, but whether or not the space will be filled with a second speaker is contested. Some rumors suggest dual speakers for stereo audio, but others say the iPhone 7 will continue to sport a single speaker.

Other design changes rumored for the iPhone 7 include repositioned antenna bands, with the removal of the bands that span across the back of the device, and the possibility of improved water resistance. Inside, we expect the iPhone 7 to have an A10 processor and 2GB RAM.

You probably noticed that the cases in our video are sporting a MacRumors logo. That's because we ordered hundreds of iPhone 7 cases in anticipation of giving them away as part of a new optional membership program that we're launching in the near future. Want one? Sign up for our interest list to be the first to hear about the upcoming membership because we'll be sending them to early subscribers.

Don’t worry, all current MacRumors content and coverage will remain free. Membership will offer added incentives and bonuses to our most loyal readers.

You're selling cases that may or may not work with the upcoming iPhone?

We're giving away cases as a bonus that may or may not work. In fact it will be more interesting if they don't work. :) We have some iPhone 6 cases (ordered before the iPhone 6 came out) that ended up fitting perfectly... so now they are just boring iPhone 6 cases. iPhone 7 case that doesn't fit any device? Now, that's cool. :)

Colour me concerned, but I worry that a lot of people will not buy this iPhone because of its form and function failings. The jutting camera is not necessary—just make a slightly thicker iPhone, which will give us a more attractive iPhone and better battery life to boot. Getting rid of the headphone jack will have people up in arms, and give Apple a ton of bad publicity.

I sincerely hope that Apple will stop taking the drugs and come to their senses.
Score: 11 Votes (Like | Disagree)

Lightning is GONE because you cannot listen to audio and charge simultaneously. That wipes out many use cases (like plugging the phone into a big audio system for a party). USB-C can do both simultaneously.

Sheesh. How come no-one pays me big bucks to be an analyst?

Have you ever observed that an iPhone plugged into a car or computer (via lightning cable) can still charge and play music simultaneously? No one will pay you the big bucks if you miss that observation.
Score: 9 Votes (Like | Disagree)

mysterydate
I will be somewhat amused if the MacRumors 7 cases turn out to not fit the 7.
Score: 9 Votes (Like | Disagree)

bladerunner2000
No headphone jack? No thanks.
Score: 8 Votes (Like | Disagree)
Read All Comments