Apple has announced that it will be opening its 39th and 40th retail stores in China in Tianjin and Shanghai on Saturday, June 11 and Saturday, June 18 respectively. Both grand openings will take place at 10:00 a.m. local time.

Apple's second new store in Tianjin this year will be located at the Galaxy International Shopping Center on 9 Le Yuan Road in the city's southwest Hexi District. The store will be open seven days a week between 10 a.m. and 10 p.m. 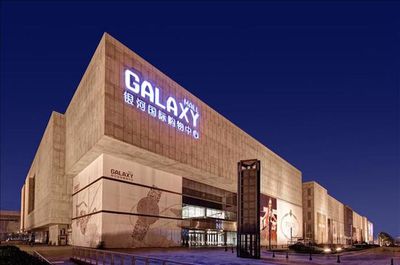 Render: Galaxy International Shopping Center in Tianjin, China
Apple's second new store in Shanghai this year will be located at the new Hopson One complex, which contains a shopping mall, hotel, office building, and more, at 1099 Xiangyin Road in Wujiaochang, Yangpu District.

In January 2015, Apple retail chief Angela Ahrendts said the company had a goal of operating 40 stores in the Greater China region within two years, and these pair of new store openings fulfill that milestone after just 18 months.

Apple opened a dozen new stores throughout China in 2015, including the first two locations in Hangzhou and a fifth store in Beijing. Other new stores opened in Chongqing, Dalian, Hong Kong, Nanjing, Nanning, Shenyang, Tianjin, and Zhengzhou.

I think it a bit of an irony that one of the Apple stores will be in the Galaxy Mall. :eek:

It'll be the first update that Galaxy receives
Score: 1 Votes (Like | Disagree)

It'll be the first update that Galaxy receives

I wonder if they'll have to pull it when it bricks their phones.
Oh, wait, that was 9.3
Score: 1 Votes (Like | Disagree)
Read All Comments

Sunday September 25, 2022 10:57 am PDT by Sami Fathi
As we approach the end of a busy product release season for Apple with only new iPads and Macs left to be announced over the next month or so, we're also setting our sights on 2023. Apple is rumored to have several major products in the pipeline for next year, including new Macs, a new HomePod, a VR/AR headset, and so much more. Other than new iPhones and Apple Watches, which are expected...
Read Full Article • 117 comments

Monday September 26, 2022 7:34 am PDT by Sami Fathi
Today marks exactly two weeks since Apple released iOS 16 to the public. Besides the personalized Lock Screen, major changes in Messages, and new features in Maps, the update has also seen its fair share of bugs, performance problems, battery drain, and more. After major iOS updates, it's normal for some users to report having issues with the new update, but such reports usually subside in...
Read Full Article • 228 comments