Apple is set to make Bollywood superstar Shah Rukh Khan its brand ambassador for India, according to a local report yesterday.

Indian tech website PC Tablet cited sources familiar with the matter, claiming that the announcement will be made when Apple launches its latest iPhone models in India later this year. 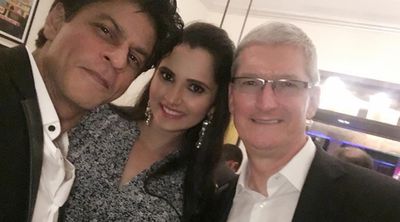 Tim Cook with stars Shah Rukh Khan (left) and Sania Mirza. (Source: Instagram)
Apple CEO Tim Cook attended a private dinner at Khan's home during his recent weeklong visit to the country. Before the Bollywood star-studded dinner, Cook was also escorted around movie sets by the president of India's Film and TV Producers Guild, Mukesh Bhatt, who said Cook was "keen to see how Apple could partner with the Indian film industry".

Apple has a number of brand ambassadors around the world, including Brazilian-born FC Barcelona soccer player Neymar and NBA player Steph Curry.

Last month it was reported that Apple is close to signing England international soccer player Raheem Sterling as its figurehead of Apple's promotional work around the European Championship this summer.

Crosscreek
India is cautious of a company that seems to take advantage of every country it does business with.
Score: 8 Votes (Like | Disagree)

MH01
What is an apple ambassador ? Just innovate , and make awesome products, enough of this celebrity pitches to push sales.

Apple is going down the Beats track, make so so products and invest in celebrities to push them, worked a charm pushing out junk headphones at first. And beats has not innovated anything in years either .
Score: 7 Votes (Like | Disagree)

2457282
I am waiting for a Bollywood dance style commercial as a result of this collaboration. That would be kinda awesome. :D
Score: 6 Votes (Like | Disagree)

I remember back when Apple fans were proud of how the products could "sell themselves" unlike the competition that needed to beg you and try very hard to convince you to buy theirs instead.

India has 1.27B people. Apple are going after those humans with another human.

Apple trying to manufacture in India with their well-known relations with Chinese labor sure looks great for the growth of India, right? Americans are clamoring for a $15 hourly wage while Indians making $20 a day are the Indian middle class, so we can be sure that Indian manufacturing workers making the iPhones will be getting that "Indian middle class" pay.
Score: 5 Votes (Like | Disagree)

Apple still (hopelessly?) trying to get India to allow it to open stores and sell refurbished phones. Wouldn't it be great if Apple spent the time & money spent lobbying India on R&D for more innovative products instead?

Your comment makes no sense.
1. A brand ambassador can help you sell more phones (for ex) through your existing channels (in India and other countries). Its not always about lobbying for opening stores.
2. Apple can spend time on R&D and on lobbying at the same time. It's not exactly a 1-person company.

India is cautious of a company that seems to take advantage of every country it does business with.

Or it could be the laws pushed by the country on all foreign entrants....but let's go with the "Apple is evil and the world is cautious" narrative. Makes much more sense that way.
Score: 5 Votes (Like | Disagree)
Read All Comments