Today marks 15 years since the first two Apple retail stores opened on May 19, 2001 in Tysons Corner, Virginia and Glendale, California. The locations welcomed over 7,700 people and combined to sell $599,000 worth of merchandise during their first two-day weekend. Apple opened 25 more stores by year's end.

The retail initiative was spearheaded by Apple co-founder Steve Jobs, who recognized the need for a better customer experience than provided by third-party retailers such as Circuit City. Jobs was helped by a retail team led by former Target vice president of merchandising Ron Johnson and Gap CEO Millard Drexler.

Steve Jobs introduces the Apple Store in Tysons Corner, Virginia
While some critics believed that Apple retail stores would be a resounding failure, especially given the dot-com collapse, the concept proved to be highly profitable and successful. Apple Stores now attract over 1 million customers worldwide per day and often generate the highest sales-per-square-foot of any U.S. retailer. 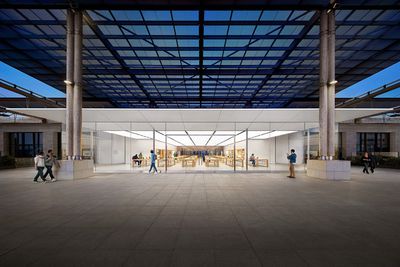 Apple's latest retail store opened in Marseille, France on May 14
Under the leadership of Angela Ahrendts, Apple has been aggressively expanding its retail footprint in China, its second largest market by revenue, while opening and renovating several stores in Brussels, Cupertino, Dubai, London, Memphis, and other cities with Jony Ive-inspired next-generation designs since 2015.

15 years ago today, we opened our first 2 Apple stores. Now we have 478 stores worldwide and over 60k employees that make it all so magical. — Angela Ahrendts (@AngelaAhrendts) May 19, 2016

DevNull0
It's times like this you realize how much Apple did in 2001-2011 and how little Apple has done over the past 5 years.
Score: 52 Votes (Like | Disagree)

TaviDuprix
Both great and sad to see Steve. Wish he had taken his health more seriously earlier. He might still be around.
Score: 35 Votes (Like | Disagree)

iPad was 2010. Firmly in the range I said they did innovate.

new MacPro is a joke. First they've only released one version in the 5 year time of Timmy and where the original mac pro was a versatile powerhouse for any high end user, the new one is a crippled little underpowered box for a small niche market. It's no wonder it flopped so badly they won't even bother with a spec bump.

4k and 5k iMacs = nice screens not made by Apple bolted to underpowered computer hardware that doesn't come close to being able to power the screens. My favourite was the MacWorld article gushing about the new 5k iMac by saying it's almost as powerful as the old model. Like Apple did good by not downgrading performance too much.

Retina phone was 2010. Also in the pre-Timmy era. Since then Android has far surpassed iPhone both in resolution and screen tech.

rMBP doesn't have the computing power to drive the screens. Also you get soldered ram, non-replaceable battery, and no standard drive bay.

and the rMB is a complete monument to absolute stupidity that is Timmy. It's thin. But it has less computing performance than an entry level mac from 2010. It has a keyboard that should be outlawed as a torture instrument. It should not exist and only serves to make Apple and Timmy a laughing stock among non-koolaid drinkers.

Also, it's funny you didn't even bother mentioning the watches. Those new bands are pretty innovative. And rose gold alone should keep Apple going..
Score: 31 Votes (Like | Disagree)

So we should applaud them for updating their product lines?
Score: 27 Votes (Like | Disagree)

It's times like this you realize how much Apple did in 2001-2011 and how little Apple has done over the past 5 years.

Edit: Removed the iPad and crossed out the iPhone, as I was incorrect on the timing
Score: 27 Votes (Like | Disagree)

It's times like this you realize how much Apple did in 2001-2011 and how little Apple has done over the past 5 years.

Enough of this. It seems that every article is just a springboard for Apple hate.

Believe it or not, Apple engineers and many others (heck, maybe even Tim Cook from time to time) browse MR. MR themselves can confirm this, with traffic coming directly from Cupertino, and showing as being from newer or unreleased OS X/iOS builds.

And yet at every single tenuous opportunity, all they'll see is rubbish like this where it's not called for. Ironically enough, the actual valid criticisms for how Apple can genuinely improve will be completely lost. They'll shrug their shoulders and think "well, you guys will never be happy no matter what we do."
Score: 22 Votes (Like | Disagree)
Read All Comments