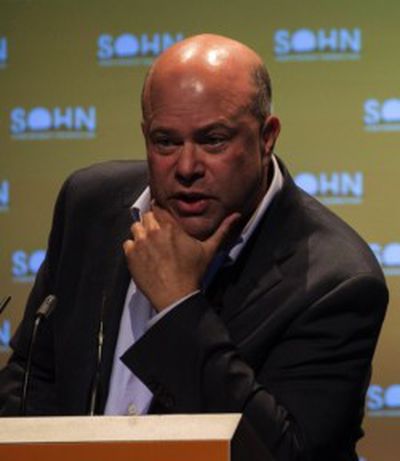 Hedge fund billionaire David Tepper has sold his entire stake in Apple, according to a filing with the Securities and Exchange Commission (via Business Insider UK).

Tepper's 1.26 million shares in the company were last valued at around $133 million, according to data from Bloomberg. The massive sale of Apple shares is the second reported in as many months, after billionaire Carl Icahn dumped his stake in the company earlier this year based on worries over China's attitude towards the tech giant.

Since August 2015, 146 of the 833 hedge funds tracked by Goldman Sachs had Apple as one of their largest positions, earning it the number two spot on Goldman's list of stocks "most loved" by hedge funds.

But Apple shares have been on the decline since last month's earnings call, where the company announced its first ever drop in iPhone sales and its first year-over-year revenue drop in 13 years.

Two days ago, shares of Apple fell below $90 for the first time in nearly two years amid investors' concerns over slumping sales. Apple's stock price fell 3.3% to $89.47 during Thursday afternoon trading, leaving its market valuation at $494 billion. At the same time, Google's parent company Alphabet briefly overtook Apple as the world's most valuable company, hitting a market cap of $498 billion.

Crosscreek
Apple innovated to many watch bands and neglected their once core business of computers.

Piggie
I still don't understand how Tim Cook can decide to fit 5400 rpm physically spinning hard drives in $1000+ computers, and then turn around and say "We at Apple are committed to making THE BEST computers that we physically can"

This is what annoys me about him. He's not a tech guy, he has no idea, and just looks smug and lies thru his teeth to the public hoping most are too dumb to realise.

I'd actually love Apple to collapse in some ways so they got rid of these marketing idiots and got back to the core of their company and dumped all the old junk and REALLY made things the best that can like they pretend to now.
Score: 51 Votes (Like | Disagree)

Mac Fly (film)
He sold at end of 2015. It was only 'spotted' now for obvious reasons. To try to drive stock lower so he can either buy back in or so his friends can. AAPL shares have been up and down like this for several years now. All ******** manipulation from the institutions. When it dropped from $700 to ~$400 it was completely unwarranted. Apple were doing very well at the time. Wall St. is driven by greed pure and simple. Since the housing crisis many people should have gone to prison, but politics in US is too corrupt now and your TV media is along for the ride. The empire is dead.
Score: 46 Votes (Like | Disagree)

maflynn
The only thing I hope for, is that Apple focuses on its business and innovation and less about its stock price, or who buys it. If you start worrying about the price of the stock, you take your eyes off of what got you there in the first place.
Score: 42 Votes (Like | Disagree)

iamnotme
I find investing fascinating..... What I find even more fascinating is how much panic you can create so easily that causes people to start dumping shares. I am not an economist or mathematician but up and downs are completely inevitable. You an't sustain significant growth indefinitely. Since most of apple's revenue comes from the iPhone it had to happen sooner or later because there are only so many people with smart phones and let's be honest, the update from year to year is so insignificant that it just doest warrant you to get out and grab a new one. Except of course for the enthusiasts.... I'm actually hoping it will slip more so I can buy more of it because it will be back. Every few years there is a significant breakthrough in technology that pushes it back up.
Score: 34 Votes (Like | Disagree)

I still don't understand how Tim Cook can decide to fit 5400 rpm physically spinning hard drives in $1000+ computers, and then turn around and say "We at Apple are committed to making THE BEST computers that we physically can"

This is what annoys me about him. He's not a tech guy, he has no idea, and just looks smug and lies thru his teeth to the public hoping most are too dumb to realise.

I'd actually love Apple to collapse in some ways so they got rid of these marketing idiots and got back to the core of their company and dumped all the old junk and REALLY made things the best that can like they pretend to now.

Absolutely. The Mac is garbage right now. I lose the OS's design and all that, but their hardware... it's just so slow. iPad's are catching up to it, and you can now buy computers in the $600 range that are faster than Mac Pros. Not cool. Not cool at all.

The 5400 RPM harddrive is also a great example. I dunno what the **** went through the minds of the people who put that in.
Score: 28 Votes (Like | Disagree)
Read All Comments