Facebook yesterday released its Moments private photo sharing app in Europe and Canada, almost a year after it appeared in the U.S. App Store.

The app helps users find Facebook photos of themselves, their friends, and particular places, and collects these together for private viewing or sharing. It does this by attempting to recognize who appears in them based on facial features, and also takes into account the date, time, and location where the photos were taken. 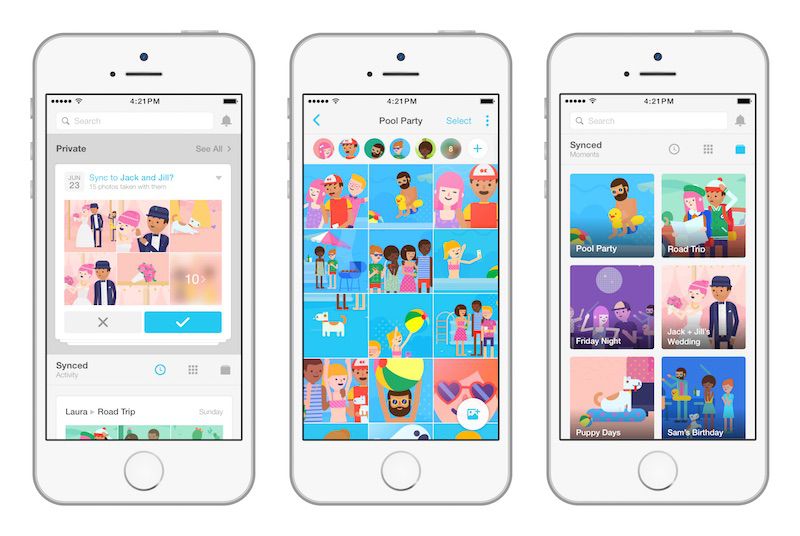 The U.S. and international versions of the company's photo-centric app use facial recognition technology to identify people in Facebook photos, but the feature ran afoul of privacy laws and regulations in Europe and Canada.

To get around the ban, the new modified version has been stripped of facial recognition technology and instead groups together multiple photos that "appear to include the same face", according to the social media company (via TechCrunch). It does this by relying on a less accurate form of technology that uses object recognition to analyze the distance between a person's eyes and ears.

Moments also integrates with Facebook and Messenger apps, where users are alerted to the fact that their friends have shared photos featuring them.

Moments is a free app for iPhone and iPad available for download in the App Store. [Direct Link]

With this, the Facebook app and Messenger app, battery life will be down to about an hour.

Nope, it'll be worse, you must be plugged in to an OEM charger to get anything more than 14 seconds of the app
Rating: 2 Votes

Pock
With this, the Facebook app and Messenger app, battery life will be down to about an hour.
Rating: 1 Votes

domness
Eh, I think most of my friends and I are already bored of using Facebook and posting every god damn photo on there. Yet another app from Facebook that probably won't be used. Besides say hi when I'm away on holiday, I'd prefer just to call and meet up with people.
Rating: 1 Votes
[ Read All Comments ]