Popular third-party Twitter client Tweetbot was updated to version 4.3 today, adding a new "Topics" feature that's designed to link multiple related Tweets together in a cohesive way. Tweetbot's Topics function is built around the Twitter feature that links Twitter conversations, something that clever Twitter users have utilized for "Tweetstorms."

Twitter has no built-in tool for handling grouped Tweets, leading Tweetbot to fill the void with its new "Topics" function. Tweets composed as a topic in Tweetbot will be linked all together via Twitter's built-in conversation threading and they'll also use the same hashtag so each Tweetstorm is viewable in a cohesive way to Twitter users regardless of the Twitter client being used to view the Tweets. 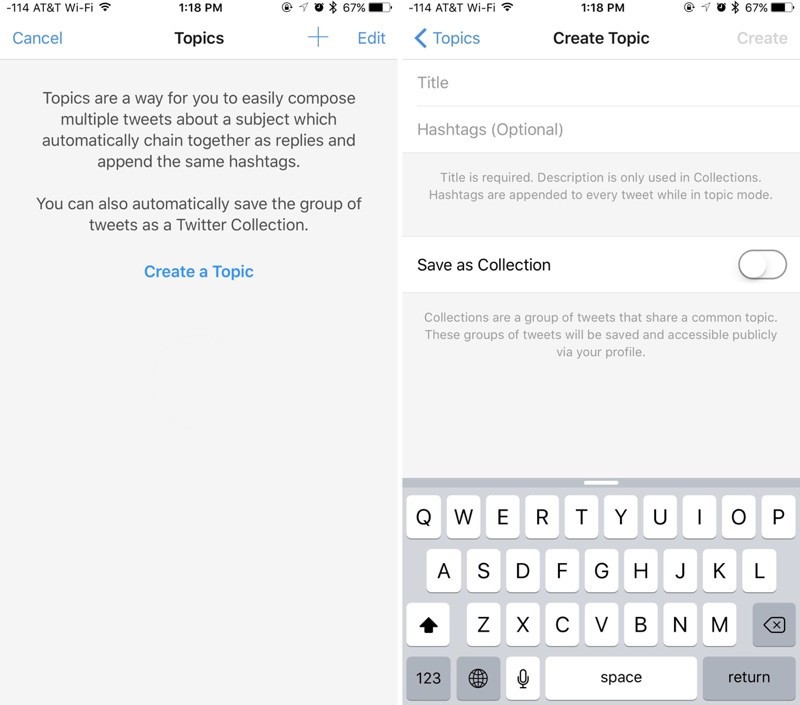 Sans Tweetbot, one would link several tweets together in a "Tweetstorm" by writing an initial tweet and then replying to that tweet, deleting the username at the start of the tweet. Though the username is removed, the tweets are still linked together in a conversation. Tweetbot's Topic feature simplifies this process.

Linking multiple tweets together is often desirable in situations where a single tweet won't suffice, such as a lengthy rant or live event coverage.

This release introduces Topics. A Topic is a way to let you quickly Tweet a group of related Tweets without having to manually reply to yourself and/or manually add the same hashtags over and over again. They are really great for rapid fire live Tweeting events.

Topics can be created by tapping on the Settings gear when composing a Tweet. Making a topic will prompt users to give the topic a title and an optional Hashtag, with another option to save the Tweets as a collection, visible in the Tweetbot app or embeddable in websites.

Today's update also includes several other tweaks to Tweetbot, including an option to hide the extra side column on the iPad, improved support for hardware keyboards, options for pasting images when composing a tweet, and more.

Other cool stuff
- You can now hide the extra side column on the iPad
- Much better support for hardware keyboards, including using arrow keys to navigate the timeline
- iPad images are no longer super huge
- You can paste images when composing a Tweet, really useful when using GIF (with a hard G) keyboards
- Support for Arabic language, including Right to Left UI
- Muting a user you don't follow will now also prevent Tweets from that user from showing up in your Mentions, Lists and Searches
- Support for Twitter Collections
- Quoting a Tweet looks much nicer when composing a Tweet
- Support for Firefox browser
- Improved support for uploading video to Twitter
- Fixed an issue where timeline would get stuck

Tweetbot can be downloaded from the App Store for $9.99. [Direct Link]

Developers have to eat. It's your freedom to choose not to pay, but complaining about paid upgrades is another matter.

I didn't complain about it, I stated it as a fact. Then I gave the reason why I made my choice not to pay, this is a forum for discussion after all
Score: 1 Votes (Like | Disagree)

darkpaw
Yay, a new feature. Woe, all the old bugs I've raised a hundred times with Tapbots are still there.

Seriously, guys, how can you not be working on these things?
Score: 1 Votes (Like | Disagree)

No option to attach media in DM's

Until their ratings drop , nothing will change

Their support is an arrogant bunch .
Score: 1 Votes (Like | Disagree)

No option to attach media in DM's

Until their ratings drop , nothing will change

Their support is an arrogant bunch .

Oh please, those are hardly key features. If you said polls, then yes.

Tweetbot excels because it's a fantastic Twitter experience that focuses on the content and not ads that are littered around the entire official app. The fonts on the official app are also huge.

Tweetbot has a excellent time based mute filter; with Twitter it's either all or nothing. If I want to mute someone for just 1 day I can't. I can't even set a list as my timeline if I wanted to.

Also, the topics in the latest version are a sign that Tweetbot continues to innovate. Now let's see how long Twitter takes to update their app. Twitters Mac app is a joke too; Tapbot's is actually usable.

Twitter's iOS and Mac developers consistently give other software engineers masterclasses on how NOT to develop for the platform. They are second only to Facebook, who has no clue what battery life and privacy means.

A note to all novice developers: if you want to follow standards and guidelines for users to not be completely pissed off while using your app, simply do everything that Twitter and Facebook don't do.
Score: 1 Votes (Like | Disagree)

citizenrich
Love the app but still won't use it because i can't see the mutes that I use on the Twitter side either on the followers tab or on individual Twitterers. Devs rolling their own mute filter is great and more powerful, but respect the existing ones.

API makes it available too: https://dev.twitter.com/rest/reference/get/mutes/users/list
Score: 1 Votes (Like | Disagree)
Read All Comments

Tuesday May 26, 2020 2:31 am PDT by Tim Hardwick
Apple will use a Lightning port instead of USB-C in the upcoming "iPhone 12," but it will be the last major series of Apple's flagship phones to do so, with models set to combine wireless charging and a port-less Smart Connector system for data transfer and syncing in the iPhone "13 series" next year. The above claim comes from occasional Apple leaker and Twitter user "Fudge" (@choco_bit),...
Read Full Article • 378 comments