Schematics featuring the dual-camera 5.5-inch iPhone 7 Plus or "Pro" that's set to launch in the fall of 2016 have been published in the June issue of Japanese magazine MacFan, reiterating many of the design details that have been previously rumored for the device.

Japanese site Mac Otakara has shared images taken from MacFan, which seemingly confirm rumors that the iPhone 7 and iPhone 7 Plus will use largely the same design as the iPhone 6s and 6s Plus.

The schematic focuses solely on the 5.5-inch model, which MacFan says will measure in at 158.22mm x 77.94mm x 7.3mm, identical to the dimensions of the iPhone 6s Plus. 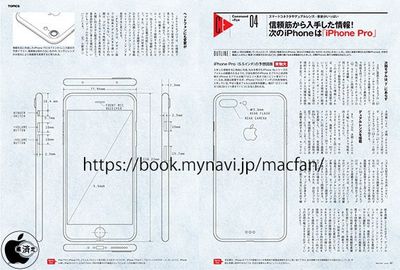 While this agrees with a previous Mac Otakara rumor suggesting the iPhone 7 and 7 Plus will not be significantly thinner, it does disagree with other rumors (including one from Ming-Chi Kuo) that have pointed towards a thinner chassis that approaches the thinness of the 6.1mm iPod touch. While it is not yet clear which design rumor will prevail, the most recent rumors are converging around a thicker body.

Also depicted in the schematic is the dual camera setup that's rumored for the 5.5-inch iPhone 7 Plus, a Smart Connector, and the absence of a headphone jack. Apple is planning to remove the headphone jack in its 2016 devices, with headphones instead connecting via Lightning or Bluetooth. Though some rumors have suggested the iPhone 7 will include stereo speakers, the design drawing features a single speaker. No other significant details are included in the MacFan drawing.

In the past, MacFan has offered up accurate information about Apple's devices, sharing design details of the iPhone 6/6 Plus and 12.9-inch iPad Pro ahead of launch. While largely accurate because its schematics often focus on previously available rumors, MacFan does not always provide a reliable picture of exact dimensions, predicting a 12.2-inch size for the iPad Pro and a 6.7mm thickness for the iPhone 6 Plus, so some of the detail on thickness could be inaccurate.

Apple is expected to debut the iPhone 7 and iPhone 7 Plus in the fall of 2016.

m.x
I can already hear Phil Schiller at the keynote:

"The most advanced phone ever. 5,5", 16GB and no headphone jack while maintaining the exact same dimensions of the phone. That's something only Apple can do"
Score: 82 Votes (Like | Disagree)

Andres Cantu
Perfect timing for Apple to release a very similar-looking phone to the 6s Plus, right? They only lost $40 billion in market cap today ;)
Score: 65 Votes (Like | Disagree)

blacktape242
apple needs to step up its game
Score: 65 Votes (Like | Disagree)

unobtainium
Jony Ive decided to take a year off.
Score: 35 Votes (Like | Disagree)

iThingsGurl
The only thing that has changed is nuthin'
Score: 34 Votes (Like | Disagree)
Read All Comments