Skype for Business will be released in three stages leading to the public launch of the app during the third quarter of 2016. Starting today, Skype for Business Mac users will be able to see meetings in the Skype business client through built-in Outlook calendar integration, joining them with a click. Full screen video, content viewing, in-meeting chat, and the ability to invite additional people to the meeting are all supported features. 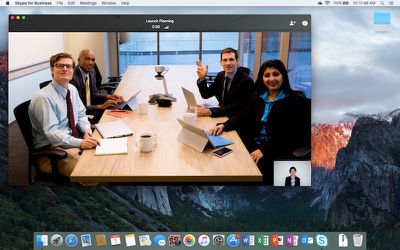 In the second phase of the Public Preview, Microsoft plans to add instant messaging, presence, and contacts, which will come in the early summer. Phase three, which will include telephony features, will be available later in the summer.

Skype for Business, designed for corporate users, supports up to 250 people per call and it includes enterprise-grade security features and employee account management.


Microsoft's commercial customers can request an invite to test the Skype for Business Mac Public Preview through the Skype for Business website. Microsoft plans to begin issuing invites to IT administrators to download the client with a gradual expansion of the preview coming in the current weeks.
24 comments

You are one a a few million. Every single mac user at my company has issues on a regular basis. Even PC users have problems.

I see my co-worker is online and I send a message, oh wait they are offline and the message didn't get through, thanks Skype!

Or I'll send a message then send another message within a few seconds there is this awful loading icon that lasts like 10 seconds before my message goes through. I have 16gb ram, i7 cpu, gigabit ethernet port on google fiber, why the eff does it take 10 seconds to send a few bits of data 150ft across the office in 2016?

I'm trying to convince by company to switch to Slack and it looks like they may take that route once ScreenHero is integrated.

Sounds like you have issues with your deployment or are talking about Skype for consumers. I was a Skype for Business/Lync engineer at Microsoft for 6 years, and can show you deployments where hundreds of thousands of people are using it without issue on a daily basis for critical functions. That IM you send is not peer to peer, it traverses the network to your datacenter, then to the other user. It's not a few bits of data, ever, considering end to end encryption.
Score: 1 Votes (Like | Disagree)

ArtOfWarfare
What I'd really rather they would do is kill Skype for Business and just add the business oriented features to the main Skype.

Skype for Business, at least on Windows, is a complete disaster.
Score: 1 Votes (Like | Disagree)

It's mostly unrelated to Skype, at least for now. It was recently rebranded, and not for the first time:


(Always a surefire sign a product isn't working but the managers really want it to: keep rebranding it!)
Score: 1 Votes (Like | Disagree)

You don't seem to understand that SfB is an on-premise solution like Exchange. For many organizations, they will not use anything cloud based and want complete control over their clients from end to end. You won't see SfB going that direction for a long, long, long time - the product road map extends for over a decade from now.
Score: 1 Votes (Like | Disagree)

What problems are you seeing? It's standard at my company. I use it at least ten times a day; no problems.
Score: 1 Votes (Like | Disagree)
Read All Comments