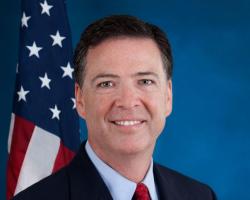 After disclosing its method of accessing the iPhone 5c of San Bernardino shooter Syed Farook to a few U.S. Senators, the FBI today released a new sliver of information regarding the highly secretive invasive steps the organization has taken to get into the iPhone in question.

FBI director James Comey gave a few hints about "a tool" from a private party that it used to gain access to Farook's iPhone (via CNN).

In a speech at the Biennial Conference at Kenyon University, Comey mentioned that the tool purchased from the private party -- reportedly Israeli mobile developer Cellebrite -- only works on a "narrow slice of phones," which does not include models of the iPhone 5s and after. Although that range allows the FBI to enter into Farook's iPhone 5c, the beefed up security of the A7 chips of the 5s and onward limits the organization's ability to use Cellebrite's tool for any of its more recent security-locked iPhone cases.

After the FBI said it found a method of getting into the iPhone used in the San Bernardino terrorist attacks, the Cupertino company promised it would insist on obtaining the details of the exploit if the case were to move forward. Since the Justice Department officially dropped the case against Apple, the company can't ask for that information, and Comey said the government is contemplating the pros and cons of looping Apple in on the situation.

"We tell Apple, then they're going to fix it, then we're back where we started from," he said. "We may end up there, we just haven't decided yet."

Even though the official legal battle is over, Apple's statement at the end of the lawsuit referred to the company's continuing promise to "increase the security" of all its products as the threat against user data becomes "more frequent and more sophisticated."

The FBI shouldn't have to explain anything, they went to Apple, who said no way and then got it done through someone else, that simple. The last thing Apple deserves is an explanation of how someone else was able to do in two weeks what they claimed couldn't be done at all, Apple either lied about it or weren't qualified to do it.

Ah, the posts of someone who is clearly completely unaware of the digital forensics industry that is funded by the likes of the NSA, GCHQ, etc.....
Rating: 26 Votes

Not as unaware as Apple is of how to access their own device, apparently.

But hey, you clearly just want to rant off about how inept Apple is at not allowing state actors to trample on citizens rights so I'll just let you continue.
Rating: 21 Votes

nostaws
Apple has to love this. FBI just told everyone they need to upgrade their phones.

"We tell Apple, then they're going to fix it, then we're back where we started from,"


That's what you suggested anyway, remember? That Apple should create that one-time loophole and then destroy it. That its just about this one case. Does that ring a bell?

Not that we believed that for a second ...
Rating: 12 Votes

Exile714
I'm no supporter of the FBI in this situation, but I know a little bit about military security.

And this is the dumbest thing the director could have said. Shouldn't a weakness like "we can't get into these specific phones" be classified? Why would you announce that? That's like saying (during the Cold War) "Hey Russia, we can't launch our ICBMs on February 29th because of a date bug, so if you want to start World War III do it on that date."

If they took this seriously AT ALL, they wouldn't have made this announcement. It's just one more proof that this is a political game more than anything.
Rating: 12 Votes

soupcan
So they went with NAND mirroring, something you can't do with any iPhone with an A7 and up. The FBI knew this, so they wanted Apple to create the software to get into the newer phones. Apple politely said **** you to that, and now they're stuck with iPhones below the 5.
Rating: 9 Votes

when your son or daughter is killed I want to be the first to hear you defending access the person's device who did it.


Legally this argument has absolutely no value. There's a reason why victims and or relatives can't be on a jury. Of course I would want to access that phone, but that doesn't mean that because I am suffering a grave loss I am right.
Rating: 8 Votes

This was the iPhone of a known terrorist who murdered people, they had a very good reason for wanting to access it. You guys here are dealing in extremes, where you believe they have to access all or nothing.

Maybe, just maybe, they wanted to access THIS specific iPhone without the need to access millions of others. As for it not being worth it, when your son or daughter is killed I want to be the first to hear you defending access the person's device who did it. Just PM me.


Your problem is you wish what happened in San B. to happen to others, that's pretty messed up and probably the biggest reason why no one is on your side. If you could justify your argument without repeating that someone's kid would get killed then you might have some supporters.

17 people getting killed is unfortunate, but 100M+ people without privacy is another issue altogether as people have the right to privacy. So do you infringe on the rights of 100M people just so you have a slim chance of a possible lead on a cell phone?

Pretty sure this is Ethics 101 all over again :eek:
Rating: 8 Votes

Fact: Apple said it would have to write a new backdoor that would take a great deal of time and resources.
Fact: An outside company was able to access it in no time at all.
Fact: Apple was either lying or incapable.

These facts do not care whether or not you believe in them.


Apple was asked for something very specific and different than what the vendor provided. Your third fact is just plain wrong, fact :-)
Rating: 8 Votes
[ Read All Comments ]