Tuesday April 5, 2016 12:35 am PDT by Joe Rossignol
Barclays appears to have enabled much-anticipated support for Apple Pay in the United Kingdom during the early morning hours on Tuesday.

A growing number of Barclays customers on Twitter have been successfully able to add their debit or credit cards from the large British bank to Apple Pay since shortly after midnight local time. 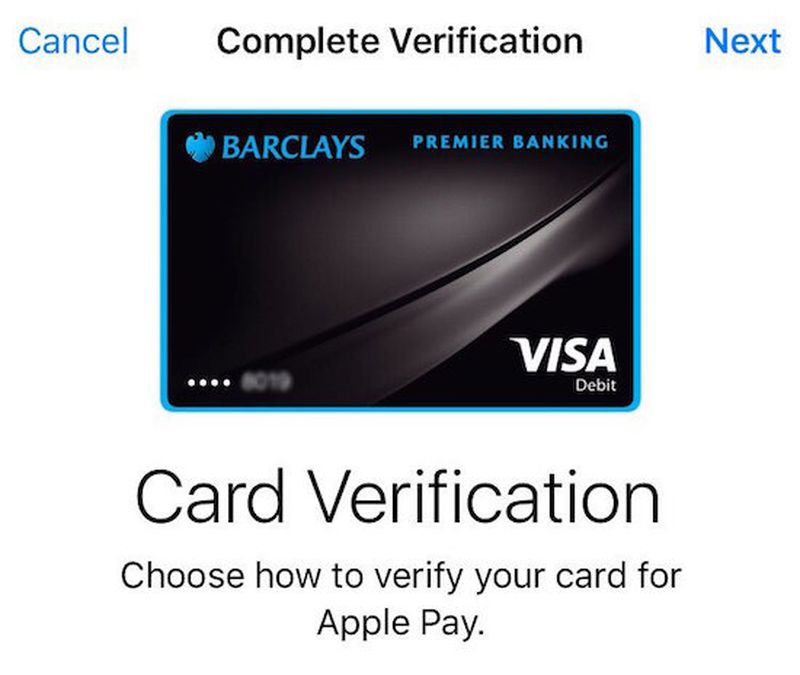 Barclays was notably absent from the list of banks and participating issuers supporting Apple Pay when the mobile payments service first expanded to England, Scotland, Wales, and Northern Ireland in July 2015.

Barclays cardholders can set up Apple Pay through the Wallet app on iOS 8.1 or later. Bank-issued cards can be scanned or added manually by tapping the "Add Credit or Debit Card" option. Follow the on-screen verification steps.

It's way easier for me to just use contactless pay than Apple Pay on my phone. All I need to do is hold the card over the reader and boom! Done

All you have to do is hold your iPhone (or Apple Watch) over the reader and boom! It's also a lot more secure than your card. :)
Rating: 6 Votes

It's way easier for me to just use contactless pay than Apple Pay on my phone. All I need to do is hold the card over the reader and boom! Done

I refuse to use the fingerprint reader to unlock my phone. I believe Apple Pay needs this to work quickly? If it's going to ask me for my passcode instead then that's going to be too inconvenient.

Huh?
Apple offer a convenient way to securely verify who you are and unlock your phone. But you refuse to use it, then complain that the other method, entering a passcode, is inconvenient?!


All you have to do is hold your iPhone (or Apple Watch) over the reader and boom! It's also a lot more secure than your card. :)


This needs reminding to people more often – Apple should make more of a deal of it in their advertising.

This is WAY more secure needing your fingerprint.
Rating: 4 Votes

RossMak
Apple Pay is great... However the £30 limit in MOST (before the fanboys attack) places makes it annoying I would use it everywhere if I could.

However I have been impressed with staff members knowing what it is in the UK recently. When it first was rolled out you were met with blank stares when you said you wanted to use Apple Pay they thought you were straight from Hogwarts with your magical phone.
Rating: 4 Votes

This needs reminding to people more often – Apple should make more of a deal of it in their advertising.

This is WAY more secure needing your fingerprint.

I hope the banks can also take notice of the improved security and get rid of the £30 limit for payments made using ApplePay.
Rating: 3 Votes

No security system is perfect. Absolutely none. But faking fingerprints is a major technical challenge that will play very little part in Apple Pay. To date, I'm not aware of any Apple Pay purchases made with a fake fingerprint. And if there are, the numbers are so low that they are insignificant in comparison to banking fraud in general.

For the end consumer, you're covered against this kind of fraud, should it happen. The convenience (and security in terms of the transaction) far outweigh the risk of fraudulent fingerprints working.


You forgotten the most important details in to why this should never be successful (and if it did, probably like 5 victims in the world):

1 - Suppose a thief stole your phone. He'll have to first successfully return to his house without any people/police following him.

2 - Had already spent $500 on a printer, making the previous owner's fake fingerprint (which WILL fail if any of the owner's fingerprints on the device are smudged)

3 - IF successfully made a fake copy of the victim's fingerprint, would have to go to a store that accepts contactless (can't use Apple Pay via apps because the victim's phone is locked)

4 - Thief attempts to try an transaction and hoping THAT:


It's a much much harder process then...stealing a contactless card. I can't imagine a thief going through all this effort.
Rating: 3 Votes

Sirious
Great to have you on board Barclays customers. You'll love Apple Pay :)
Rating: 3 Votes