Thursday March 31, 2016 10:09 am PDT by Joe Rossignol
Verizon customers planning on upgrading to the iPhone SE or another new smartphone should do so sooner rather than later, as the U.S.'s largest carrier has outlined plans to introduce a new $20 upgrade fee starting next week.

Beginning next Monday, April 4, a new $20 flat rate charge will be applied to smartphones purchased on a Device Payment financing plan, or at full retail price, according to a leaked internal memo obtained by MacRumors. 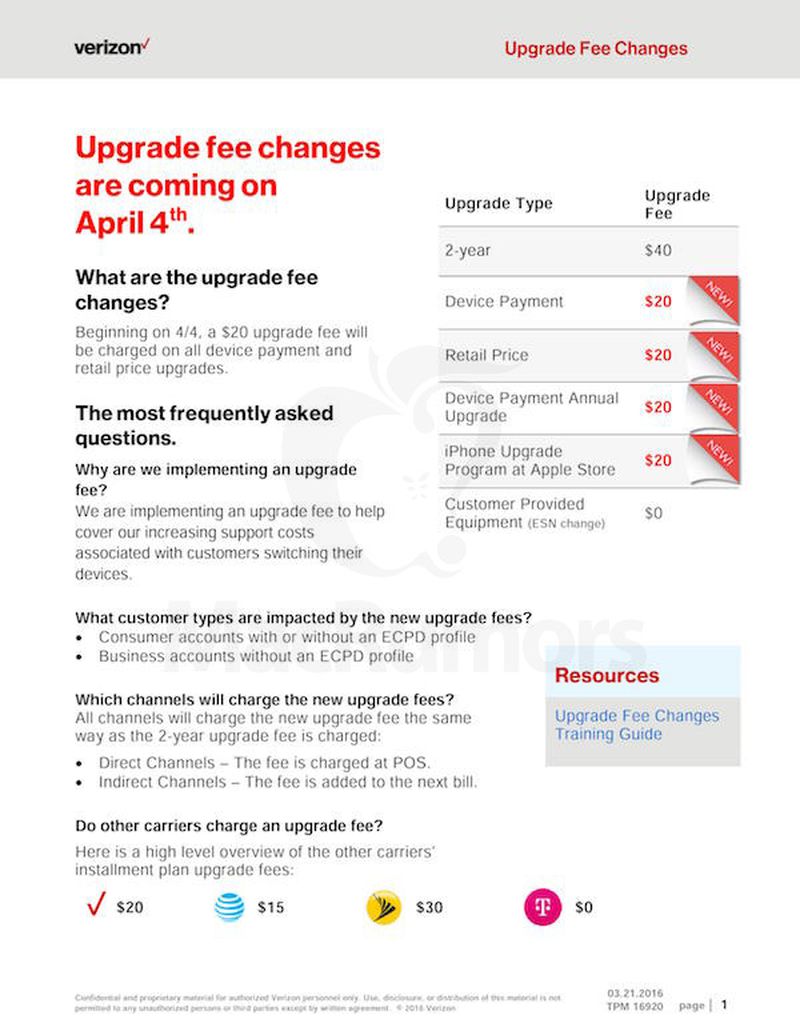 The new upgrade fees will impact all consumer accounts, as well as business accounts without an ECPD profile. Verizon's existing $40 upgrade fee for customers renewing a two-year contract with a new device remains in place.

The new $20 upgrade fee will be charged at the point of sale through direct Verizon sales channels, while the fee will be added to the customer's next bill when the smartphone is purchased through an indirect reseller.

AT&T similarly charges $15 per smartphone added or upgraded with AT&T Next, and "bring your own" devices. Sprint also charges an upgrade or activation fee up to $36 per device. T-Mobile does not have upgrade fees.

preludeoflight
Phew, I had almost gotten worried that Vzw had run out of ideas and ways to charge me for absolutely no reason!
Rating: 111 Votes

Verizon cites "increasing support costs associated with customers switching their devices" as a reason for the new fees.

Support costs? what support costs? these companies should be called out for robbing their customers.
Rating: 45 Votes

oneMadRssn
This is such nonsense, and a shining example of why telecom needs regulation.

Take SIM card out of old phone, insert it into new phone. Go online, and update the IMEI numbers if needed. How does this warrant a $20 fee?
Rating: 29 Votes

godslabrat
I thought I paid them almost $200 a month to support my phone... where's the extra $20, and what is it going to? Why, exactly, do they need to charge me $20 because I agreed to give them more money?
Rating: 14 Votes

Andres Cantu
T-Mobile's the only one who cares about their customers. There's no doubt about that.
Rating: 14 Votes

Norbs12
I guess they still have not figured out how to disable using apps on the iphone and then charge to enable them.
Rating: 12 Votes

T-Mobile's the only one who cares about their customers. There's no doubt about that.


If they really cared, they would spend money on new towers (not upgrading old towers) so I could actually use T-Mobile :(.
Rating: 12 Votes

Just means that many more people are coming over to T-Mobile.

I've been with T-mobile for almost 20 years and I have no complaints.
Rating: 9 Votes