Friday February 19, 2016 7:49 am PST by Mitchel Broussard
Apple has been awarded the top spot on Fortune's list of the "World's Most Admired Companies," marking the ninth consecutive win for the Cupertino-based company on the list. After Apple, Alphabet (Google's parent company), Amazon, Berkshire Hathaway, and Walt Disney round out the top five spots. 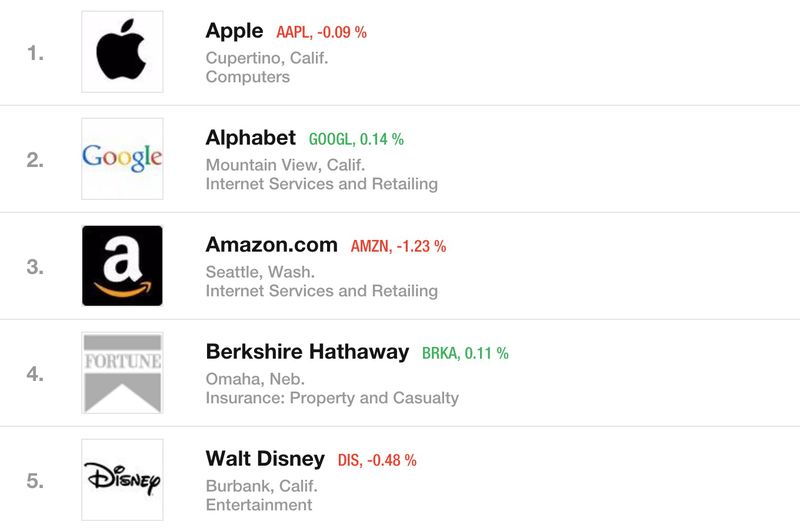 There's a new AAA standard in corporate America: the one-two three punch of Apple, Alphabet, and Amazon. For the fourth time, our list of the World’s Most Admired Companies Top 50 All-Stars is led by a trio of tech giants under 40 years old. They preside over a class of blue chips and even younger tech stalwarts, such as Facebook (No. 14), Salesforce (No. 34), and Netflix, which makes a return to the Top 50 at an impressive No. 19. They also are joined by newcomers Visa and Publix, which make debuts at Nos. 47 and 49.

The list was whittled down from a collection of the 1,000 largest U.S. companies ranked by revenue, along with 500 non-United States companies with revenue reaching, or exceeding, $10 billion. Fortune's survey partners at Korn Ferry Hay Group then interviewed executives, directors, and analysts to rate the companies within their own industry on nine criteria, including investment value and social responsibility.

Apple got a score of 8.6, beating out Alphabet's second place marking of 8.2. Notably, the iPhone maker also came in first in all of the nine key attributes of reputation, unlike in years past where a few other companies edged it out in topics like global competitiveness. Other prominent companies on the list include Facebook (14th), Microsoft (17th), Netflix (19th), and AT&T (48th).

To see the full ranking of the World's Most Admired Companies, visit Fortune's website.

Does Alphabet really use the Google logo? That just seems weird.


Is it just me or is the name "Alphabet" a stupid name? They should have left it Google.
Rating: 4 Votes

Surf Donkey
Oh wow, all these corporations are just so admirable /s. Wtf, sitting on mountains of cash, tax evasion, manufacturing outside the US. What again is so admirable??

To create the 54 industry lists, Korn Ferry Hay Group asked executives, directors, and analysts to rate companies in their own industry on nine criteria, from investment value to social responsibility.


No breakdown of these criteria makes the dump ranking a bit stupid. Of course executives, directors and analysts care sooo much about social responsibility.
Rating: 3 Votes

Admired by whom exactly? I can see Apple but Berkshire Hathaway?


You can't see the forest for the Apple trees.
Rating: 3 Votes

Does Alphabet really use the Google logo? That just seems weird.

Naw. They have a logo for Alphabet that looks as forgettable as the name it represents.

Google's never had a strong grip on design. Funny that, given how they only hire the best and brightest (or so they say).
[doublepost=1455898913][/doublepost]

Disney is the last company anyone should admire:
http://www.nytimes.com/2015/06/04/us/last-task-after-layoff-at-disney-train-foreign-replacements.html

0815
And I admire them now even more since they fight for our privacy, where other companies would have just given in (and did in the past)
Rating: 2 Votes

jdillings
Disney is the last company anyone should admire:
http://www.nytimes.com/2015/06/04/us/last-task-after-layoff-at-disney-train-foreign-replacements.html
Rating: 2 Votes

They're not breaking the law, so what's the problem? What would you have them do with their money?


So anything within law is socially responsible. Got it. :confused:

I just find it hard to believe any company that mines our earth for so many resources that go in basically throwaway electronics, while creating them under harsh conditions, while absolutely being the best at maximizing profits can be at the top of a list where "social responsibility" is one of the factors. But it sounds like you have a much different understanding of social responsibility than me.

And I am only calling out Apple because they are at the top of this list. Disney, Amazon, Google, are hardly "admirable" as well.
Rating: 1 Votes

Would have thought Microsoft would have been tight on that list

Still many dislike MS for their past evils and if you're a non Windows user in a company with MS centric IT, for instance, you can't help but despise the fact that so many excellent multi platform protocols/tools exist but they use ones from MS which are designed to lock out or suck on other platforms.
Rating: 1 Votes