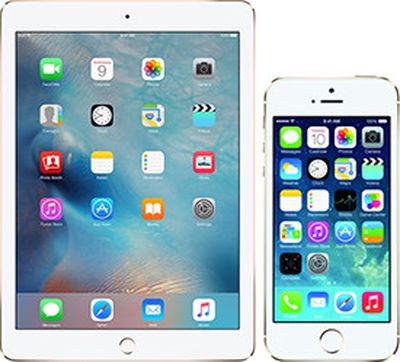 Apple is planning to begin selling the upcoming iPad Air 3 and the 4-inch iPhone 5se starting on March 18, reports 9to5Mac. The two devices will be offered in stores and online starting on Friday following their introduction at an event to be held on Tuesday, March 15.

Apple is not expected to accept pre-orders for the two devices, and the short period between announcement and launch suggests Apple expects supplies of the iPad Air 3 and iPhone 5se to be plentiful. It is unusual for Apple to offer an iPhone directly after an announcement, but this is the first time the company has launched a standalone non-flagship device.

Launching the new iPhone and iPad models so soon after introduction and not offering pre-orders would be a new strategy for Apple. Apple typically releases new iPhone models one or two weeks following the introduction events and an online pre-order period.

The iPad Air 3 is rumored to take on design elements from the iPad Pro, offering a four-speaker layout and a Smart Connector that would work with iPad Air accessories. Size wise, it is expected to be nearly identical to the iPad Air 2, and i may also include a rear-facing flash.

Apple's March event is also expected to see the debut of new bands for the Apple Watch, including a Black Milanese Loop that was spotted on the Czech Republic Apple Store website in January. Software currently in testing, including iOS 9.3, watchOS 2.2, OS X 10.11.4, and tvOS 9.2 could be unveiled shortly after the event.

X38
Definitely wanting to update my 5S, but last year's leftovers aren't going to cut it. There had better be a 4" version of the iPhone 7 this fall, or I'm holding out for another year. Get it through your thick head Tim, there's plenty of people who want a flagship phone that isn't phablet sized.
Score: 14 Votes (Like | Disagree)

“I’m not convinced people want to watch movies on a tiny little screen. To paraphrase Bill Clinton, ‘It’s the music, stupid, it’s the music!’ Music’s been around for a long time, will continue to be, it’s huge.” - Steve Jobs, 2003

"It doesn’t matter how good or bad the product is, the fact is that people don’t read anymore." - Steve Jobs, 2008

"There are no plans to make a tablet. It turns out people want keyboards…. We look at the tablet, and we think it is going to fail." - Steve Jobs, 2003

"Given that all tablet users will already have a smartphone in their pockets, giving up precious display area to fit a tablet in our pockets is clearly the wrong tradeoff. The seven-inch tablets are tweeners, too big to compete with a smartphone and too small to compete with an iPad." - Steve Jobs, 2010

Never treat Jobs' words as gospel. Especially in the 2000s and later, he seemed perfectly willing to change his tune if there was a reason compelling enough to do so. Those of us clamoring for the Pencil on the Air are doing so for the precise reason that fingers suck as writing input devices. And the iPad's size makes it ideal for many for writing input, and all the existing styluses on the market for writing input are compromises at best. The demand has been there for quite a while.
Score: 14 Votes (Like | Disagree)

It is astounding how Apple acknowledges the rapid decline of iPad sales but then refuses to include features that would give Air and Air 2 owners reason to upgrade. But on the positive note for me I'll get to keep that $600 in my pocket.

You're being a little hasty - wait for Apple to officially announce the product before condemning them.
[doublepost=1455310338][/doublepost]

The pencil is the dumbest product Apple has released in recent memory. It's an overpriced and glorified stylus which Steve Jobs would never have approved of.

Products like the pencil have started to turn Apple into a complete joke.

Clearly, based on the replies here hoping for Pencil support on the Air 3, you're wrong.
Score: 11 Votes (Like | Disagree)

NT1440
If the new Air supports the Pencil, sold.

That doesn't mean he couldn't change his mind. But nevermind that Steve's whole point was using the stylus as a main input method sucked. Your finger is still the main input. The stylus is for when you need more detailed input for drawing or writing and whatnot. It is absolutely not stupid. The point here is, don't buy one if you don't want one. It isn't required to use the iPad, it's an add-on. Back when Steve made that comment, every touchscreen device had and required a stylus to even use it. His point still stands.
Score: 9 Votes (Like | Disagree)
Read All Comments